While climate change may have long seemed an issue for hardcore, tree-hugging environmentalists, concerns are spreading.

Even as attention focused on the tumultuous events in Hong Kong during recent days, there have been developments arising from ongoing climate change – which will have far greater ramifications than any election process.

You’ve surely noticed that although autumn is well advanced, days remain hot and steamy. September [2014] was indeed significantly warmer than average for Hong Kong, and followed the world’s warmest (northern) summer since records began in 1880, according to the US National Oceanic and Atmospheric Administration.

New images that symbolising the changes appeared this week, showing thousands of Pacific walruses on the coast of Alaska. Usually, the walruses rest on sea ice, but the summer sea ice has now retreated north of their feeding areas, leaving them with no choice but to gather on shorelines.

Scientists including Peter Wadhams, Professor of Ocean Physics at the University of Cambridge, UK, believe the Arctic sea ice is in such steep decline that the Arctic will soon be ice free in summer. Though the ice extent fluctuates from year to year, there has indeed been a marked decline in recent years, and the US-based Polar Science Center has reported that the Arctic ice volume in August this year was 55% lower than in August 1979, when its observations of ice volume began.

This week also saw the publication of a report on whether extreme events of 2013 could be linked to climate change. Published by the American Meteorological Society, this assessed a selection of extreme events from around the world. In accordance with earlier predictions, this found that extreme heat events were made more likely by human-induced climate change, while a cold event was less likely.

Those heat events included Australia’s hottest year on record, as well as heatwaves affecting Europe, Japan, Korea, and China – where the average temperature for 2013 was the fourth highest since 1961. Though not mentioning Typhoon Haiyan, which devastated the southern Philippines, the report did note that it is difficult to attribute single storms to climate change.

So far, scientists have required hindsight to link specific events to climate change. But U.S.-based non-profit science journalism organization Climate Central has just announced a new initiative, which aims to announce almost in real-time whether global warming plays a role in extreme weather. “In the media, we are seeing this notion that you cannot attribute any individual events to climate change, but in fact the science has really evolved over the past decade,” Climate Central’s chief scientist, Heidi Cullen, told Reuters.

The system will employ sophisticated climate models, combined with evidence from historical observations and previous research, and is set for launch by the end of next year.

While climate change may have long seemed an issue for hardcore, tree-hugging environmentalists, concerns are spreading. On Wednesday, the British Medical Journal published an editorial calling on the World Health Organization to declare climate change a global public health emergency, concluding, “Deaths from Ebola infection, tragic and frightening though they are, will pale into insignificance when compared with the mayhem we can expect for our children and grandchildren if the world does nothing to check its carbon emissions. And action is needed now.”

The US Pentagon might seem even more distant from environmentalists. Yet its latest Quadrennial Defense Review, published earlier this year, warned that: “Climate change poses another significant challenge for the United States and the world at large. As greenhouse gas emissions increase, sea levels are rising, average global temperatures are increasing, and severe weather patterns are accelerating.”

The latest talkfest was the UN Climate Change Summit 2014, a one-day event on 23 September. US president Barack Obama gave a fine speech, including his belief that China, with the fastest increase in carbon pollution, must join the United States to lead the rest of the world in carbon reduction. “We have a responsibility to lead,” said Obama. “That’s what big nations have to do.”

Obama’s Chinese counterpart, Xi Jinping, was not present to hear and respond to these remarks. However, there were some fine words from vice premier Zhang Gaoli, who said China will “make greater effort to more effectively address climate change,” and will soon announce post-2020 actions that will include marked progress in reducing carbon intensity.

Though a whitepaper acknowledges that, “China is one of the countries most vulnerable to the adverse impact of climate change,” there is also a defensive attitude to emissions. A commentary in Xinhua published on the day of the climate summit noted, “From the start of the Industrial Revolution to 1950, the carbon dioxide emitted by developed countries accounted for 95 percent of global emissions,” and later asserted, “developed countries, with abundant financial resources and advanced technologies, should shoulder major responsibilities and make tangible moves to deal with their high per capita carbon dioxide emissions.”

There is of course truth in this. But the situation is too urgent to wait until other nations act. Just before the summit, an international consortium of scientists dubbed the Global Carbon Project reported that we have already emitted 1,430 gigatons of carbon from 1870 to today. This is approaching half the amount that scientists estimate would lead to a temperature rise below 2C – which has been adopted as a sort of benchmark for where the severe danger zone might lie.

At the current rate of emissions, we will hit the “carbon quota” within just three decades. And according to the Global Climate Project, China this year dominates global CO2 emissions – accounting for 28 percent of the total, double the US contribution. Even China’s “War on Pollution” could prove damaging, given plans to create gas in immense coal bases built in remote areas. According to InsideClimate News, these could lead to China alone emitting the remainder of the world’s carbon quota by 2050.

There are clarion calls for countries to respond to climate change much as if going to war – forming strategies, and devoting considerable resources to overcome the threats. Changing light bulbs and turning lights off one hour a year are clearly inadequate given the scale of the issue. A carbon tax seems essential, so there’s a price on greenhouse gas emissions, and money can be used to support renewable energy.

But our response is lackadaisical. We’re blundering into a future with ever more extreme climate events, which will surely cause ructions in society that make this past week’s disruptions and political arguments seem trivial by comparison. 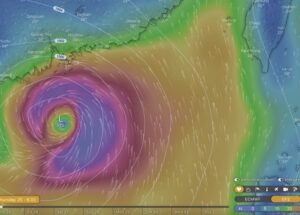