So here we are. The heating is on.

No longer are we at a stage of predicting global warming may occur, with experts cautiously saying this or that weather event just might be attributable to climate change, in turn due to increasing greenhouse gas concentrations in the atmosphere. Just this summer (2022), northern hemisphere heatwaves have resulted in a slew of high temperature records – several by margins startling even seasoned climate scientists.

As you noticed if you’ve been here over summer 2022, Hong Kong was also hot hot hot – with July becoming the hottest month in Hong Kong since records began in 1884.

While it generally takes time for the impacts of heat and droughts to become known, two flash floods that hit Kentucky in the US last month, killing 37 people, also served to emphasise the consequences and perils of climate change. It might seem, then, this really is time to act, including by making good on promises made in high profile meetings, like the much-ballyhooed Paris Agreement adopted by 196 parties in December 2015.

Sadly, however, a look at the map produced by Climate Action Tracker – an independent scientific analysis of climate action since 2009 – shows little progress towards the globally agreed aim of holding warming well below 2°C. The black and red colours for countries with “critically insufficient” and “highly insufficient” climate action predominate; nowhere is green for action compatible with the Paris Agreement.

The tracker gives a highly insufficient rating to the climate efforts by China, including Hong Kong. But are the measures adopted in Hong Kong actually enough to tackle climate change?

For answers, you might check Hong Kong’s Climate Action Plan 2050, published by the Hong Kong Government in October last year. This 69-page booklet starts well, with a brief chapter summarising the issue and Hong Kong’s strategies and actions.

The action plan emphasises carbon neutrality, which means balancing emissions of carbon dioxide and other greenhouse gases with carbon offsets, so there are zero carbon emissions overall.

While this seems a splendid idea, the action plan admits that achieving it presents great challenges. And for some indication of the challenges, just consider what you’ve done today. Showered? Carbon emissions were involved in providing water, and any heating. Pulled on clothes, ate breakfast with tea or coffee? More carbon emissions. Likewise if you took transport and an elevator to an air-conditioned office. Even reading this article in print or online involves carbon emissions.

Which is not to say that you – yes, you! – are the cause of climate change. Big businesses may have tried to put the spotlight on individual responsibility in environmental issues, but the heavy lifting is up to governments and businesses. And in Hong Kong, like much of the world, that heavy lifting has barely begun.

The action plan does include measures undertaken in Hong Kong, but too often these are inadequate or even downright questionable. Government buildings have reduced energy use; yet have you passed mall entrances, felt chilled air spilling into the streets? “Green transport” is mentioned, in a place where it takes a brave soul to cycle downtown. Urban forests seem worthy, never mind the near lifeless lawns near Tamar [though maybe some trees added to area since my last visit?].

Then, there’s the Shek Kwu Chau incinerator, with the fancy title of Integrated Waste Management Facility. This is somehow classed as helping achieve zero carbon emissions, even though it involves transporting waste to beside an outlying island, and setting fire to it in a glorified bonfire.

Meanwhile, the solitary wind turbine on Lamma has been turning away since 2006, like a monument to Hong Kong’s inaction regarding renewable energy.

Ideally, responding to climate change also involves strengthening defences against extreme weather events such as floods, typhoons and storm surges, as well as sea level rise. All are mentioned in the action plan, but while Hong Kong now has impressive drainage facilities to limit impacts of severe rainfall, there is nothing comparable protecting coastlines.

Historic typhoons have caused massive damage and loss of life in Hong Kong; notably a 1937 storm that killed around 11,000 people, many of them in homes pulverised by a storm surge that inundated Tai Po and Sha Tin. Yet while storm surge is the main threat from tropical cyclones, the idea of a surge affecting modern Hong Kong perhaps seemed fanciful until September 2018, when Typhoon Mangkhut sent huge waves crashing into Heng Fa Chuen estate.

Even after Mangkhut, the action plan’s main measure to counter future storm surges and sea level rise involves planning a study on shoreline management; and the government continues planning the huge Lantau Tomorrow Vision reclamation. This reclamation appears risky as the sea rises and stronger typhoons are possible, and I’ve written before that Lantau Tomorrow Vision could be a folly, prompting the Civil Engineering and Development Department to respond that the design standards and technology will, “take into consideration the probable severe weather conditions including storm surges.” But as we move into uncharted territory, what is probable?

Last month’s temperatures in the UK were so high that an actual television weather forecast looked very similar to a hypothetical forecast for 2050. And on 2 August, a team of researchers published a paper with the title, “Climate Endgame: Exploring catastrophic climate change scenarios”. This makes the case for exploring worst case scenarios as climate change accelerates – not so we all throw up our hands in despair, but because doing so could compel action, as the idea of “nuclear winter” galvanised disarmament efforts.

With climate change clearly a present-day danger, Hong Kong’s action plan targeting 2050 seems remarkably relaxed, as if we have ample time for studies and discussions. Perhaps we’ll be lucky, and the approach will prove justified. But it’s also worth bearing in mind the conclusion of the “endgame” paper: “Facing a future of accelerating climate change while blind to worst-case scenarios is naive risk management at best and fatally foolish at worst.” 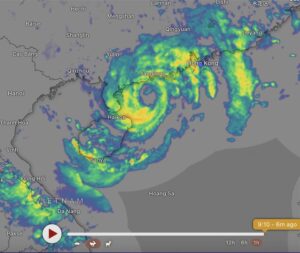