Maybe you know that if you find a baby bird that may have fallen from its nest, the best thing to do is leave it somewhere safe so parents can look after it: perhaps in original nest, maybe even in fake nest.

But turns out Hong Kong police procedure doesn’t accept this; instead just inflexible, and seemingly likely to just kill the nestlings in some sort of “rescue” attempt involving a trip to the station, and report making etc etc. Good grief!
– though see Update below; positive outcome here as commonsense and a guy’s great kindness prevailed.

Here’s complaint re dissatisfaction I made today (didn’t send photos):

A nest of birds – Barn Swallows – had fallen or been knocked to the ground beside Cheung Chau market. 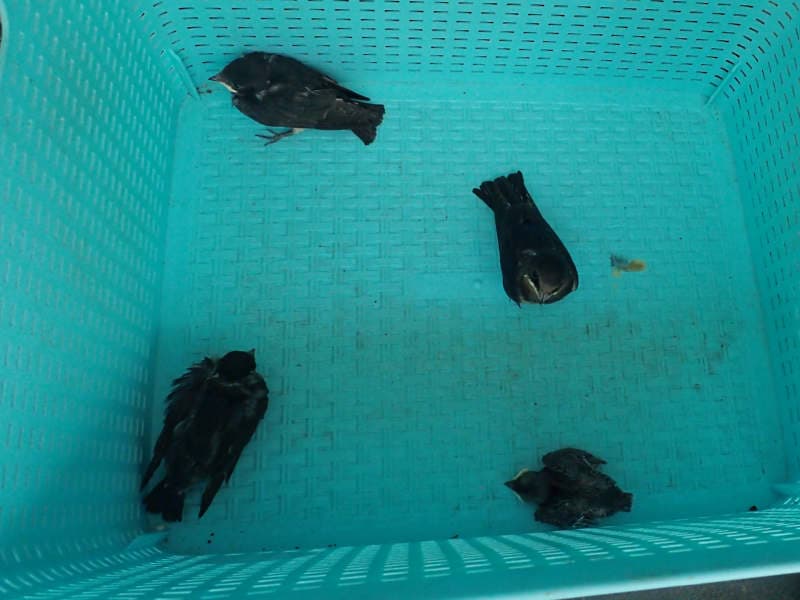 A friend rescued some of the young that had fallen down; varied in ages down to one that looked like almost just out of egg. Another – oldest? – could fly a little.
Put in basket.

He called the police; and police came.

I said it was best to put the birds in a safe place, where the parents could feed them. Even bought a tiny basket, as fake nest. 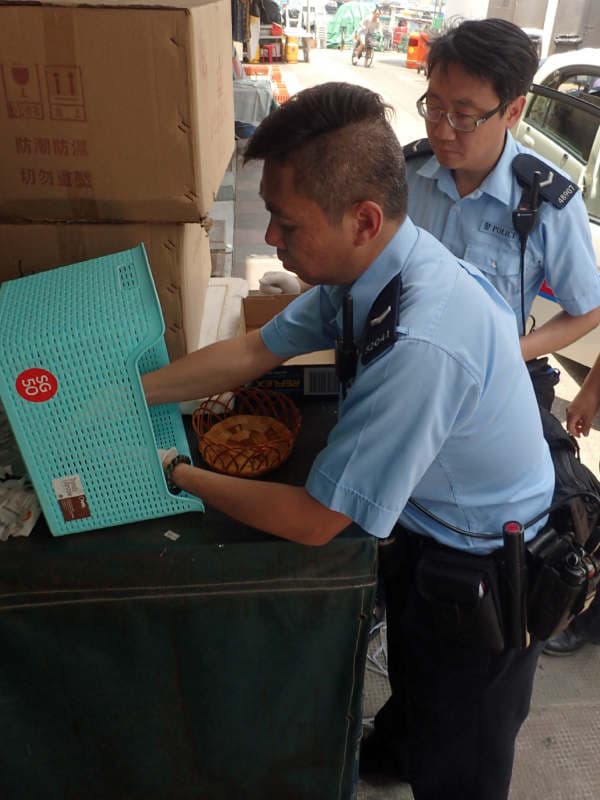 But one of the police said procedure meant taking the birds to police station; someone from AFCD was phoned, maybe coming.

I said this would mean the deaths of the baby birds. Showed info online from Cornell University saying leave babies near parents; phoned a friend in Hong Kong Birdwatching Society who confirmed this. 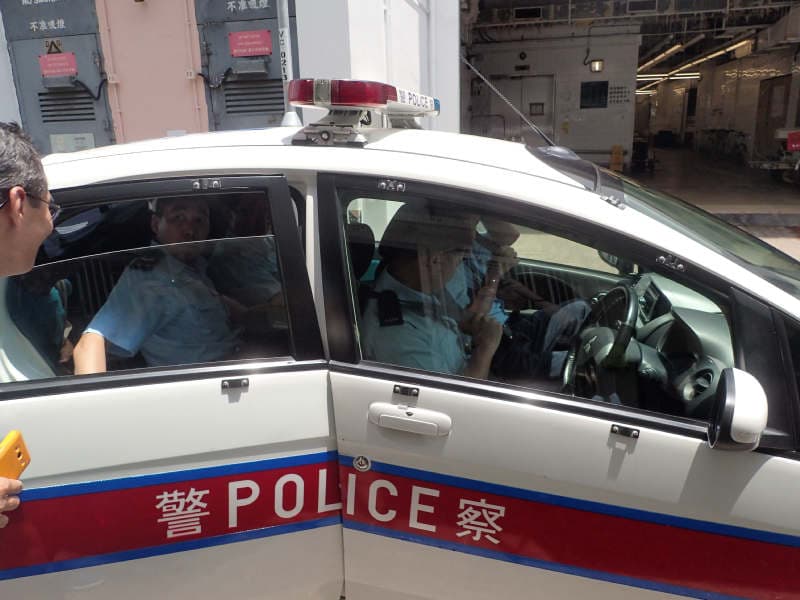 But seemed nothing could stop “procedure” and the birds were taken away in police car; very likely to die soon. Hence, my dissatisfaction.

Seems here there is something wrong with police procedure.
Global best practices for dealing with baby birds are to let parents care for them: put back in nest, or maybe put in something like a fake nest [as I wanted to do]

Plenty of information on this online; for instance:

‘my Natural Pet animal hospital is filling up with wild baby birds dropped off by well-intentioned people. These folks have come upon a baby out of its nest and felt their only option was to pick it up and take it with them.

Unfortunately, in many cases these baby birds weren’t really rescued – they were kidnapped.’
http://healthypets.mercola.com/sites/healthypets/archive/2011/05/24/when-rescuing-a-baby-bird-is-not-the-compassionate-thing-to-do.aspx

[so in this case, baby birds “kidnapped” by the Hong Kong police!!!!]

‘If you see a nest or parents nearby, and the bird is a fledgling, you may be fine to leave the baby bird alone.’ http://www.wikihow.com/Help-a-Baby-Bird-That-Has-Fallen-Out-of-a-Nest

‘Unless injured, the fledgling bird should be left where it is.’ http://wdfw.wa.gov/conservation/health/rehabilitation/baby_birds.html

‘Removal of a fledgling from the wild has to be a very last resort, and then only if it is injured or has definitely been abandoned or orphaned.’  http://www.rspb.org.uk/makeahomeforwildlife/advice/helpingbirds/health/babybirds.aspx

Here’s one of the highly agitated adults, which were around pretty much the whole time, including flying towards the nestlings in basket. 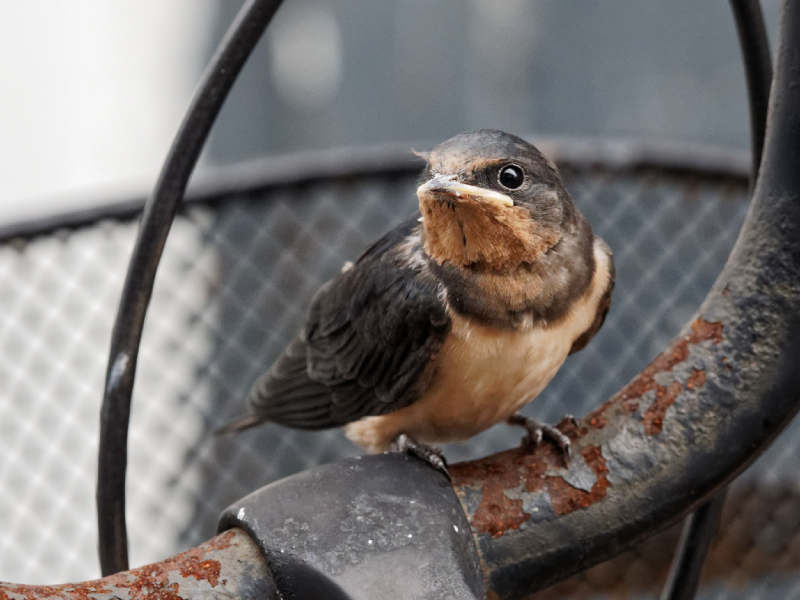 And here, a youngster that looked pretty much ready to fledge; could fly a little. It wasn’t nabbed by the cops; left it perched on a bike wheel – parents around and set to feed etc. Just maybe will survive; I reckon more chance than its siblings anyway.

Went back this morning; and turned out the police had phoned my friend, who set up two small plastic baskets, put nestlings in these.

Adults were coming back to feed them; also a fledgling that can fly a little [maybe as yesterday’s bird; then could barely reach bicycle handlebars, today a swoop up and over a rooftop] 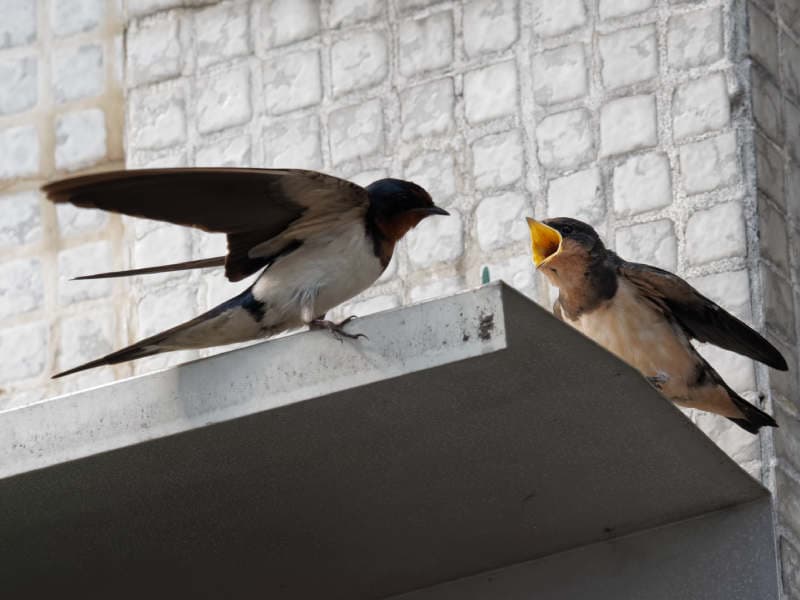 I’d contacted Complaints Against Police Office re the procedure here; just phoned by guy from CAPO and explained that while this case turned out well, I hope that for future the procedure can be amended so can at least be flexible: if police again asked re nestlings/fledglings, can leave in safe place for parents to care for unless strong reason not to: and not with a need to take the birds to police station [!].
Also mentioned Agric Fisheries and Cons Dept not experts in looking after nestlings; the experts are the parent birds.
The guy who phoned said he understood, maybe helped I’d sent links to a few websites on this. So might help a bit for future..

Went to veg shop on corner of the street; told that three of the young swallows have flown. So, top result! [I don’t know about 1 or 2 others; yet still, these birds saved from having fallen to ground]