Cheung Chau (長洲) looks tiny on a map yet boasts plenty to see and do in a day.

Cheung Chau (長洲) looks tiny on a map of Hong Kong, yet – like the interior of Doctor Who’s Tardis there’s far more to it than may first appear. With coastal trails, beaches, small rural valleys, and a village dotted with temples but with only one (police) car, Cheung Chau boasts plenty to see and do in a day; and plenty to eat once you’ve seen and done.

With a natural harbour to the west of the spit (now protected by breakwaters), Cheung Chau has become home to one of Hong Kong’s main fishing communities, lately boosted by commuters who’ve made it home.

Arriving at Cheung Chau by ferry

Housing is mainly packed on the spit, and clustered along nearby hillsides – so most Cheung Chau folk are just a few minutes’ walk from the main ferry pier, which links the island to the outside world (Central is just 35 minutes away by fast ferry, around 50 minutes on a larger, slower ferry). Further away, the hills and coasts are relatively wild, and scenic.

Arriving by ferry, you’ll pass through the typhoon shelter, with the many fishing boats, then leave the pier to find yourself on the main waterfront road, the Praya. On your left, around a couple of hundred metres away, is the Pak Tei Temple, dedicated to Cheung Chau’s “patron saint”, Pak Tei – the Northern King. Visiting this, you can also wander some of the island’s narrow streets, perhaps checking out small stores, and a shrine to an Earth God who looks after his district.

Walk straight ahead from the ferry pier, and just on the right is a road that will quickly take you across the spit, to the main, Tung Wan Beach. This is a fine beach for swimming in summer – it’s hardly pristine, but the water is usually cleaner than at many Hong Kong beaches.

Turn right at Tung Wan, and there’s the Windsurfing Centre on a tiny headland: there’s a small band of windsurfers who are regulars here (the owner’s niece even won Hong Kong’s only gold Olympic medal, for windsuring), and you can hire windurfers as well as sea kayaks. 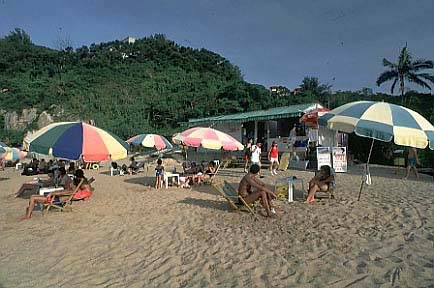 On past the centre is another, smaller but often quieter beach, Kwun Yam, with a shack-style beach bar just above the tideline: a fine place to chill out on a hot afternoon.

From Kwun Yam Wan, you can see steps climbing the headland to the south. These lead towards the path known as … drum roll please … the Mini Great Wall. (Which isn’t a wall at all, but does wind along a rugged landscape for a length of all of, oh, a few hundred metres.) This path is well worth taking.

The steps lead up to a pavilion, which is a pleasant vantage for looking across Cheung Chau to the hills of nearby Lantau, as well as towards Lamma and Hong Kong islands. From here, you can drop down to … another drum roll, and a trumpet fanfare if you will … the Mini Great Wall. As you’ll find, this is a rather expensive looking path, built of blocks of whitish rock, with a “railing” of the same blocks. At times, with a dollop of imagination perhaps bolstered by some helpful musrhrooms, you’ll see why it was given its name.

Human Head Rock is a far better candidate for a lookalike contest, in my view. Especially if you walk down and partly round the rock, for the prime view of the nose, ear and other features on this giant boulder perched on a slim “neck”.

On from here, the Mini Great Wall runs to a finish on a south-facing headland. But you can continue exploring Cheung Chau by taking a flight of steps up from near the Human Head Rock.

There are winding trails along headlands, over hills and through small valleys in this southeast corner of Cheung Chau – but you shouldn’t get lost, especially as the Tourism Board has lately put up signposts. You can curve right and down towards the ferry pier, or continue to Cheung Chau’s also attractive southwest corner.

Past the Pirate’s Cave

Lest you want to head to southwest Cheung Chau directly from the ferry pier: turn right, and follow the road alongside the typhoon shelter. You’ll leave the main village, pass a bicycle parking area that’s for some reason been built a long way from anywhere, and arrive at a tiny harbourside village, Sai Wan. Here, you can walk a short trail to a Tin Hau temple. Then, head up and over the headland, to the path that drops down towards Cheung Po-tsai Cave.

Cheung Po-tsai was a pirate, who commanded a large fleet that pillaged shipping in the Pearl River mouth. But althought he’s supposed to have cached his booty in the cave – which isn’t much more than a cleft in the rock – there’s no evidence he did so. Nope, no pirate treasure, though you can perhaps rent a torch to clamber from one cave opening to the other.

More rewarding, I think, is the path that turns off to the left, down steep steps between boulders, to the rocky coast. There’s a concrete path over the rocks, too, but this quickly halts at a small cove (private land issues, stopping government building the concrete trail here – and a good thing too if you ask me). Here, you can fairly easily continue round the cove at low tide; when the tide is in, you can wade, or use rough ladders to climb up and over boulders.

Then, there’s concrete trail again – steps leading steeply uphill. This is a fairly wild corner of Cheung Chau, with views to Lantau and other islands. There are big boulders including the Reclining Rock – sadly defaced with graffiti, and the trail soon drops again, to the Italian Beach (as westerners living on Cheung Chau have known it).

From the beach, there’s a path up, to a junction with Cheung Chau’s Peak Road – which is really just a footpath. Turn right, and you can walk along southern Cheung Chau, perhaps later turning right to the southeast corner, or continuing till the road drops to the waterfront near the ferry pier.

Part way down the slope towards the harbour, on the right, is one of the old Boundary Stones, which once marked off the south of the island as a special residential area – mainly Europeans I believe, with a fair proportion missionaries, who rested here between expanding their flocks. Maybe several of the old buildings that dot southern Cheung Chau were former retreats for missionaries; though often dilapidated, with overgrown gardens, they seem the kinds of places where one may have taken tiffin on the verandah.

North Cheung Chau also has trails. From beside the Pak Tei Temple, steps lead uphill, to a path towards a hilltop pavilion overlooking most of Cheung Chau. New trails from the pavilion run to another, newer pavilion, and down to a secluded beach.

After exploring Cheung Chau, you might head for one of the many seafood restaurants along the waterfront [maybe be leery of one that looks aimed at tourists; if you can, look for places with locals – islanders]. With fishing families among the main customers, and views of fishing boats in the harbour, Lantau beyond, these are far more “real” than most Hong Kong seafood restaurants. Cheaper, too, though the food can be great.

Don’t worry too much about return ferry times – they’re pretty regular till after 11, and if you tarry beyond that there’s one after 2 (there are a few regular bars and karaoke bars to help keep you occupied). Or even stay the night, in a holiday flat, or the Warwick Hotel.