The Kings of Concrete and wannabe kings are queuing up with plans to build on or over some lovely places; and the government seems split between conservation, and dreaming up Big Silly Projects.

Looking around Hong Kong, you might think there was plenty of concrete around, thank you very much, and we should be making a concerted effort to protect the remaining beautiful, relatively wild areas. Not so! No, the Kings of Concrete and the wannabe kings are queuing up with plans to build on or over some lovely places; and the government seems split between conservation (some sectors of government seem keen on this), and dreaming up Big Silly Projects. [First posted May 2004]

Here and there, there are conservation successes, where some of Hong Kong’s prime wild places are protected. But by my reckoning, we could really do with some strong examples of “eco-tourism” – to show that it’s possible to make money from a place without wrecking it. Or even these last bastions will be despoiled, ruined obliterated, razed too. (Takes deep, meditative breaths before continuing.)

As I don’t have time to cover all threatened sites or success stories as thoroughly as I’d wish, here are a few pithy summaries; I aim to add to the list at times.

The Frontier Closed Area between Hong Kong and Shenzhen has been like an unofficial nature reserve, but now looks threatened by a slew of potential developments. Teams from Kadoorie Farm and Botanic Gardens have surveyed the FCA, and found it’s rich in wildlife, including some locally rare species . You can find more info on the KFBG website (head to What’s New). 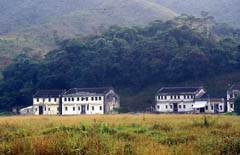 Sham Chung comes high on my list of threatened sites. Set on the northwest of the Sai Kung Peninsula (opposite the Ma On Shan side of Three Fathoms Cove), this used to be one of our loveliest almost-abandoned village areas. (I took the photo here as development-cum-devastation of the old rice paddies was just beginning, and yet to reach this part.)

It lies in a basin surrounded by hills, opening towards Three Fathoms Cove to the east, with land designated as country park on the hills just above it. Sun Hung Kai evidently bought up all/most of the old village land (not protected as country park: big loophole really), and last decade set about trashing much of it: some of the land being ostensibly converted to a farm for disadvantaged children- not that this ever seemed used, the rest becoming golf fairways and bunkers.

This devastated the former rice fields and creeks, which had been rated one of Hong Kong’s best freshwater wetlands: paradise fish rescued from here were found to belong to a new species for science, Hong Kong Paradise Fish, which is unknown from outside Hong Kong. Then, little happened.

Recently, though, there have been reports that Sun Hung Kai has written to Tung Chee-hwa, asking for permission to build a golf course and resort here. And, in late July 2004, reports that Sun Hung Kai has abandoned the idea, but is perhaps renting land to formerly resident villagers – or perhaps they will only borrow the land? – so they can build a golf course or something.

Good grief – what a nightmarish prospect! Can’t Sun Hung Kai do better, like make use of the marvellous old village houses, and the great scenery, tranquillity?

I had a letter in the South China Morning Post, saying A golf course should not be developed at Sham Chung. [Update, Sept 2022: seems plan cancelled]

Shalotung is another lovely, former farming village area – surrounded by yet technically excluded from country park. A developer has come up with plans for a golf course and luxury housing; these have been rebuffed, and from time to time the developer has tried new plans (including a smaller golf course), but again these haven’t met with thumbs-up from the Town Planning Board. A new plan, inc temple, is in the pipeline.

Again, there seems to be an opportunity for eco-tourism, including through perhaps renovating at least some of the old village houses. [Update Sept 2022: golf course plans stopped; now some conservation efforts underway]

At Pui O, southeast Lantau, plans have surfaced for a 100-acre holiday resort, on land that’s supposedly a coastal protection zone. [Surfaced, but not yet making progress I think. Sept 2022: plans perhaps abandoned, but still death by a thousand cuts underway]

Also here – and far nicer sounding – is Treasure Island, a beachside eco-venture that hosts visits by schoolkids, aims for meetings by businessmen who want something different to the city.

Hei Ling Chau, an island off the east coast of Lantau, was threatened by one of the government’s Big Silly Projects – a super prison, but happily this was abandoned, after opposition and, perhaps, govt realised it wasn’t such a good idea..

Cheung Sha, southern Lantau, is a long bay cut by a small headland, with two big, beautiful beaches. There have been suggestions (from government) for a resort here – one even called for a Greek-style development along the coast.

Let alone the severe impact such a resort would have on the beaches, these ideas seem silly as this area isn’t, I think, too good for a resort:
it’s relatively far from the typical tourist areas in Hong Kong, yet is not so tranquil as to make for a tranquil retreat (a highway passes close above the beach);
Hong Kong is cool in winter, darn hot and humid in summer – when it’s often uncomfortably hot for lazing for long in the sun, or there may be spells of monsoon downpours;
it faces south, with no shelter from the southwest monsoon typical of summer, so I reckon there will be spells when the sea is too choppy for swimming (yet it’s sheltered from the northeasterlies of winter, so nor is it decent for surfing).

Mui Wo marsh, on Lantau, is one of our few remaining freshwater/brackish wetlands; can be quite good for birds, yet languishes uncared for, with a drainage scheme making it drier, old fish ponds now dilapidated, and some rubbish dumped, development perhaps encroaching.

Shuen Wan marsh, east of Tai Po Market, is a real pleasant place for birding, but seems at least some local villagers don’t like it – as part has been filled in to create land for building houses (after protests, as I recall, villagers responsible had to remove some of the infill; even so, the future of Shuen Wan hardly seems secure).

The Deep Bay wetland is given some protection by being listed as a Ramsar site; but developers have bought up expanses of fishponds, and housing estates have been built (as at Fairview Park and nearby; also Tin Shui Wai new town, which is a somewhat monstrous place on land reclaimed from [mainly] fishponds). Recently, schemes have met with opposition from green groups and even the Town Planning Board; in at least one place, high-rise housing may be built on part of the land a developer owns while the rest of the land is protected as wetland.

But Deep Bay’s future is uncertain; it doesn’t help that plans keep surfacing for developments along the border – including beside the Shenzhen River just upstream of the bay. (This was straightened during a flood reduction scheme, and land that had belonged to Shenzhen became Hong Kong’s – but it seems Shenzhen still wants this developed, supposedly to benefit both Hong Kong and Shenzhen.)

The incredible shrinking Victoria Harbour is widely reckoned to be wonderful to look at, yet though there has been massive reclamation, the government seems intent on filling in ever more of it. We hear about returning the harbour to the people – by, err, filling in more of the harbour; there’s been lots of public argument, court cases, even threats against harbour crusader Winston Chu, yet the tide of concrete looks set to advance. [Update 2022: maybe most harbour reclamation has been stopped; but plans for massive Lantau Tomorrow Vision reclamation to west of Victoria Harbour.]