The British and Chinese governments agreed to list it under the Ramsar Convention on Wetlands of International Importance – showing they recognised it should be protected by “wise use”.

A slew of globally rare birds occurred each year, and numbers of waterbirds increased to a peak of around 70,000 in winter 1995/1996; great flocks of gulls, ducks and shorebirds treated visitors to what one birdwatcher called, “One of the greatest bird spectacles in Asia.” The Hong Kong Government helped expand the land managed by the World Wide Fund for Nature in the bay’s key reserve, Mai Po Marshes.

But now, many local conservationists are afraid Deep Bay – which is really a shallow estuary – is in steep, perhaps terminal decline.

The first signs of major trouble became evident early this decade, when birdwatchers overlooking the estuarine mudflats noticed the tides often seemed lower than predicted. But the tides weren’t really lower; instead, the mudflats were rising, and rising quickly.

As the mudflats rose, the tideline receded – meaning the waterbirds were more distant. More worryingly, waterbird numbers wavered, fell, and fell again. From the high of around 70,000, winter counts became fairly steady at around 50,000, then tumbled to just 30,000 this past winter.

While count coordinator Yu Yat Tung says this low figure might result partly from factors including air pollution hiding distant birds from counters, he fingers rising mudflats as the prime suspect. “We all know sedimentation is the main problem for Deep Bay,” he says – as the mudflats rise, the mangroves advance, and the birds have ever less tidal flats to feed on.

“The sedimentation rate definitely increased during the 1990s,” says Mai Po reserve manager Dr Lew Young. “In ten years, the mudflats rose around 30 cm, so if we extrapolate, in 30 years there’ll be another metre rise – there’ll be nothing left.” 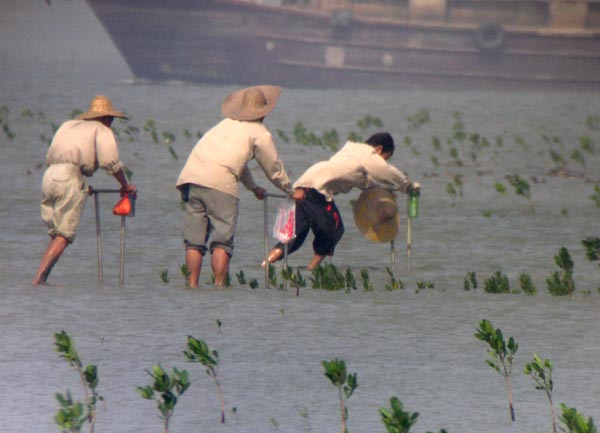 Dr C. Swennen, a Dutch specialist in mudflat invertebrates who first visited Deep Bay in winter 1997/1998, has also seen alarming changes underway. He says the mangroves are generally rising, and while this has been partly stemmed by workers squishing seedlings in front of Mai Po, he has found another clear indicator of sedimentation: algae that grow high on mudflats. “In 97/98 they were only behind the hides,” he says. “The next visit they came to just around the hides, next year up to 10 metres in front of the hides, and now they’re more than 100 metres in front and on some isolated spots further away.”

Satellite photos – by NASA – from 1975 to 2001 show the area of mudflats available to wildlife is shrinking, partly because mangroves are spreading like microbe colonies on a Petri dish, partly because of reclamation work on the Shenzhen side. [Series at right here; mangroves appear reddish. Series with wider images below.] Geologist Bernhart Owen has analysed mud cores from further out in the bay, and discovered sedimentation is accelerating.

Despite all this evidence, the Agriculture, Fisheries and Conservation Department – responsible for conservation of the Hong Kong side of the bay – is unsure there is a problem. “The mudflat is a very dynamic environment, with erosion and sedimentation,” says Cheung Ka-shing, the AFCD’s Wetland and Fauna Conservation Officer.

The department has recently been using Global Positioning equipment to monitor mudflat levels at eight points, and so far the results seem random, making Cheung hesitant to average the figures. “We need a benchmark for the sedimentation rate,” says Cheung; the department can’t tell the current rate is not natural.

But sedimentation rates haven’t been truly “natural” since the river catchments were largely forested, centuries ago. Owen’s mud cores reveal increases in rates from the late 15th centuries, when there was an influx of farmers, who felled trees, resulting in increased erosion; and ever-higher rates last century.

So, why are the mudflats currently rising so fast, and what can be done about it? No one really knows for sure.

Owen suggests sedimentation increased last century because of industrialisation, urbanisation and reclamation. But something has lately happened to kick the process into overdrive. Mai Po manager Lew Young believes a possible culprit is the Shenzhen River Regulation Project.

This joint scheme between the Hong Kong and Shenzhen governments was aimed at improving the capacity of the main river entering the bay, and so reducing flooding. The first stage included deepening and straightening the river channel just before it enters the bay; it was completed in 1997 – shortly before the mudflat rise became evident at Mai Po.

Young says the silt appears to arrive in pulses coinciding with heavy rains, with storm surges apparently scouring silt from the river channel, then slowing and depositing this cargo in front of Mai Po. But there are other factors, including ongoing reclamation schemes that are also shifting currents, tightening the noose around the bay.

Especially with Deep Bay listed as a Ramsar site, Hong Kong is cautious about new projects that might impact the bay. Shenzhen, however, is more gung-ho. Mike Kilburn, vice chairman of the Hong Kong Birdwatching Society, says Shenzhen is initiating schemes with only cursory, or even secret, environmental impact assessments, and there is little cross border communication. And a horrific project looms: Shenzhen has proposed piping seawater from the east into the Shenzhen River, to flush sewage from the river into Deep Bay.

Kilburn was among green group representatives who attended a meeting on the flushing scheme. He says the plans were presented by a sanitation engineer, who was stumped by the question, “Why don’t you clean up the sewage before it enters the river?”

Even if commonsense prevails and the pipeline plans are scrapped, the sedimentation problem will remain. Kilburn isn’t sure there is a solution; Cheung of AFCD has “no idea” what to do to stem the silt. Swennen lists three ideas for removing silt – in one of these, he envisages using a small dredging boat to effectively “vacuum” a wide area of mudflats. Young believes this would be prohibitively expensive; he instead advocates starting to protect the coast nearer the mouth of Deep Bay, where some new mudflats are forming, even though they’re not so rich in wildlife.

Now, we must decide what kind of Deep Bay we want those visitors to experience. A place that’s still home to magnificent bird flocks despite the pressures; a wetland that’s used wisely, and remains the jewel in Hong Kong’s wild crown? Or – a big, mud-choked toilet?

This article appeared in the South China Morning Post (slightly edited) on 7 December 2004.

I’ve since read that sea levels are rising along the s China coast – as typical worldwide thanks to melting polar ice; maybe this will someday counteract the rising mudflats, and cause a lot of different problems!