Best known for its market, Stanley is a pleasant place for strolling around, with highlights including a temple and a small beach.

Set on the isthmus of Hong Kong Island’s southernmost headland, Stanley is best known for the market that’s a magnet for tourists, and for locals during weekends and public holidays. As well as being jam-packed with restaurants, it’s a pleasant place for strolling around, with temples and a small beach among the highlights.

Stanley’s Chinese name is Chek Chu (賊柱), and it was the largest settlement on Hong Kong Island when the British arrived in the mid-19th century. (The town’s English name is after Lord Stanley, a Briton who held the grand title of Secretary of State for War and the Colonies.)

A census in 1841 recorded 4350 people living on HK Island (at least 2000 more lived on boats) – around 2000 of them were Stanley residents. Then, too, there was a “very good bazaar”, though it evidently supplied sea-faring people; large fleets of fishing boats berthed at Chek Chu.

Like the sailing junks on many a market stall painting, Stanley’s fishing boats are long gone. But you can find echoes of the old fishing village, and even enjoy relative tranquillity on busy days, by exploring away from the main visitor areas.

Discover more than just the market in Stanley

Arriving at Stanley, you’ll easily find the market – downhill on the right, from the main bus terminus. The small road here soon plunges into the market, where stalls are crammed close together, and are themselves crammed with goods; paintings, clothes, Chinese ornaments, toys and so on.

Look hard enough, and you’ll come across outdoors gear for sale: shoes and boots, raingear (and down jackets), some camping equipment.

Especially on a busy day, the main market alley is pretty darn claustrophobic. But if you need to surface for air without really leaving the market, try turning left, uphill a little. You’ll find yourself in what’s surely the old fishing village, with streets too narrow for cars, houses clinging to the slope; it’s a small place so you can hardly get lost for long as you wander around past more shops and art galleries, as well as small cafes and restaurants (at least one – Lucy’s – rating well with gourmets).

Come on! – this is an outdoors site not tourist shopping information, so leave the market towards the north (on the right as you look from the bus terminus). There’s a waterfront road lined with restaurants – which are even allowed to have tables on the road during at least Sundays and public holidays (this seems sensible, yet the Hong Kong Government had treated al fresco dining as something weird, or even slightly wicked).

You pass a small temple to a water god, and soon arrive at the transplanted Murray House. First built in 1846 near Central on the north of Hong Kong Island, this is one of Hong Kong’s oldest colonial buildings. It was dismantled to make way for development – the Bank of China Building is on its old site, and after storage in a warehouse, was rebuilt here in 2001.

The building now holds restaurants, and a small museum.

There’s a new plaza here, too, with what just may be the nicest public housing estate in Hong Kong. And, there’s an old temple to Tin Hau – goddess of the sea. You can wander in here, to check out the statues of Tin Hau (and other gods), as well as an old pirate drum and bell, and a tiger skin, now black from incense smoke.

It’s the skin of a wild tiger that attacked a villager in 1942 and was shot in Stanley by policeman Mr Rur Singh. South China tigers used to occasionally enter Hong Kong (they can swim, so maybe this one swam across to HK Island) – and indeed were surely resident before humans destroyed their habitat and killed them. This was one of the last South China tigers in Hong Kong; now, this sub-species is almost extinct. 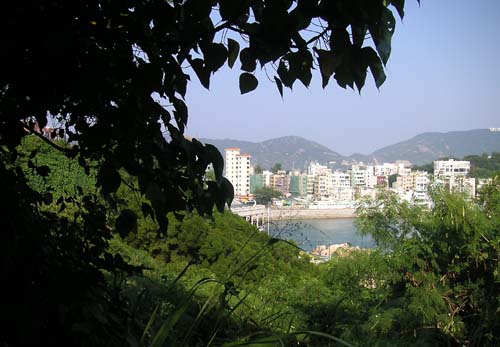 On the coast just past the rebuilt Murray Building, there’s a footpath with a signpost pointing to a Tin Hau temple and an ancient well. This makes for a short but pleasant stroll, along the foot of a wooded spur – where the government and a company concocted a plan for making a garden style park by, err, chopping down 500 trees (yes, you read that correctly). Happily, this barmy project was laughed off the drawing board, and the wooded spur has remained intact, with new paths built, including above the coast to the temple.

The temple’s tiny, set right above the rocky shore. Just below a wall is the opening of the “ancient well”, looking much like any old well.

From here, you could return to Stanley Market. Then, perhaps, continue on past the market stalls, and up and out of the village, to find a flight of steps down to St Stephen’s Beach. This is only small, but people swim here (there are lifeguards in summer), there are barbecue pits, and there’s a pier.

There’s a larger and better beach up and over the isthmus, on the east shore. In late May or June, it’s the scene of the Hong Kong International Dragon Boat Championships.

Though there are plenty of buses to Stanley, perhaps the best is bus 6 (not 6X) from Exchange Square in Central. Unlike most buses, this doesn’t go through the Aberdeen Tunnel, but instead climbs up and over central Hong Kong Island – affording fine views. If you want to return to town quickly, consider taking bus 260, an express bus that makes few stops along the north of HK Island, instead following a highway for part of the route.

Published or Last Updated on 1 September 2022