Hoi Ha Wan (海下灣) – the Bay Beneath the Sea – in the north of the Sai Kung Peninsula, is one of Hong Kong’s best places for hard corals, with around 60 species. The bay below the high tideline has been designated a country park; and I’ve just visited, including joining an eco-tour by the Agriculture, Fisheries and Conservation Department. 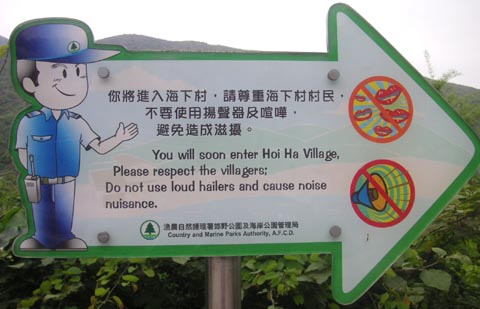 Firstly – shhh, don’t disturb the villagers. Turns out there have been increasing numbers of “eco-tours” to Hoi Ha in recent years, all too often with noisy groups – noisy partly as the guides were prone to using loudhailers. Groups have been rather quieter of late, and villagers happier.

I have some time to spare before joining an ecotour, and walk east along the coast, towards Wan Tsai Peninsula. Soon come across the infamous WWF Hong Kong Marine Life Centre – which is built on legs that look suited to an oil platform, and seems almost like a mini fortress, the kind of place Jack Bauer might take prisoners.

I head back to the village, to await the ecotour, to start at the far more modest Agriculture, Fisheries and Conservation Department’s warden post. First, I’m an ecotourist, having milk toast and coffee at a small cafe.

At around 10.30, the ecotour begins. It’s aimed at locals, so the commentary is mostly in Cantonese; first, we’re told about the marine park, and not catching fish etc.

We set off along the path to the east – which I’d just walked along. Soon, down to the public pier, which affords views to one of the areas of coral. On this cool and windy day, conditions aren’t good for viewing corals – also doesn’t help that it’s high tide – but there are some fish to be seen. (Before heading to Hoi Ha Wan, you can check predicted tides at [nearby] Ko Lau Wan.)

One of the two guides, Betty Wong, tells me [in English] that people can swim over the corals from here (I’ve noticed masks and snorkels available for rent at local stores, so it should be straightforward to arrive at Hoi Ha, rent mask/snorkel, and head here to explore). She also tells me most corals are brain corals; unusual in the world for brain corals to predominate.

Back towards the village, we stop at an old, protected lime kiln, where guide Abby Lam tells of the former lime making industry, in which shells and corals were baked to form lime: just one of several destructive practices that have reduced local corals and marine life.

We walk through the village, then just above the car park/minibus turning area, and down a path to the right, to a path leading to coastal trees.

There’s a stream to cross.

There are leaves to feel; these seem to be covered in soft fur.

Then, we arrive at a small area of mangroves, above a beach dotted with boulders. Here, the eco-tour ends.

Wandering back to the village, I notice a tree that could be straight out of Tolkien (Fangorn Forest, tho not so huge), also this white bauhinia.

Back in the village, I have plenty of time for lunch at this simple restaurant – where you can also rent canoes and small rowing boats.

Guide Betty Wong kindly emailed me some photos from Hoi Ha, taken during sunny weather. (“Hoi Ha Wan is much more beautiful on sunny days!”); they included a shot of Tung Fung Shek – East Wind Rock. Striking this rock causes a ringing sound; and local legend has it that hitting this rock calls the east wind – and as strong easterlies sometimes capsized fishing boats, leading to deaths, people hitting the rock weren’t popular.

Hoi Ha is served by minibus 7 from Sai Kung.