Hong Kong once had a shark fishery indicating at least they were at one stage abundant, and why perhaps they are now locally extinct. 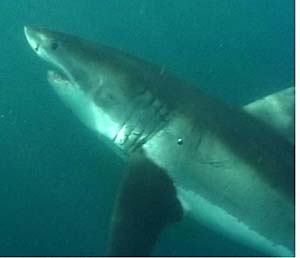 Leading up to the hot summer, Hong Kong prepares itself for the possibility of a migratory shark or sharks making a naturally occurring visit, and a rare one if that, along our small fish size meal coastline.

Our Leisure & Cultural Services Department prepare us for the incredibly low odds of being attacked by a shark or what to do if we even see one (evacuate every beach in a 10 mile radius). The Marine Department spend endless hours chasing up false alarms. And beach goers spend all day scanning the horizon for that black fin slicing through the water.

By the way, did you know that historically Hong Kong once had a shark fishery indicating at least they were at one stage abundant, and why perhaps they are now locally extinct. A bowl of shark fin soup please….

What is it with Hong Kong and sharks?

Most of our public gazetted beaches are protected by shark nets or exclusion nets that are in effect barriers between sharks and the human’s recreational zone. These nets are primarily designed to keep out sharks in the first place. Hong Kong has been implementing the use of shark nets since the early 1990’s when a series of shark attacks resulted in 6 fatalities (see The Sai Kung Shark Attacks – early 90′s, Sai Kung).

. The responsible rogue shark or sharks has never really been identified and a lot of speculation still surrounds these attacks.

Today we can have a fair guess as to what species might have caused the fatalities. Hong Kong has not had a reported attack since 1995. And in 8 years of diving I have certainly never encountered anything capable of eating a toe let alone a leg or arm. But the sharks are out there.
There are probably quite a few shark species that live in these waters for most of the year but due to the inherently poor visibility and intense fishing we rarely get the chance to see one. What we do know is that the sharks appear around the months of May and June and late summer when the sea temperatures increase and decrease respectively. This combined with migrating fish stocks and populations of rays and large fish makes the coastline an opportunity worth investigating. It is this investigation that brings the sharks into the recreational swimming zone.

It appears that as a result of these attacks Hong Kong people have never really come to terms with sharks patrolling our coastal waters, despite the array of nets. Perhaps people feel that government shark nets are not the best line of protection!

This perception may never change unless ‘we’ can convince the younger generation that sharks have important roles in the ocean and should be respected as top predators, efficient culling machines and not demonised as mindless killers.

On average there are 50 shark attack cases globally reported to the Shark Attack Files each year, ranging from nips on the hand to unfortunate fatalities. Of these 50 incidents approximately 15 % are fatal, i.e. roughly 5 people per year are fatally wounded by a shark attack and I must stress that this is a global figure.

The migratory species including the Tiger Shark and Great White Shark are what captures our imagination; the species with big teeth and black eyes. If we want to understand why the sharks come into contact with humans then we need to observe their natural behaviour since our bony bodies are definitely not a preferred choice of prey.
Most shark attacks are prompted by 2 basic situations.

Attacks in the first situation can be subdivided into provoked and unprovoked attacks. Provoked attacks involve the poor judgement of divers and swimmers who might pull the sharks tail or accidentally tread on it whilst playing in shallow waters. Unprovoked attacks are those in which the victim enters into the behavioural sphere of the shark and fails to heed the warning signs. These signs are difficult to view if swimming on the surface but are obvious to divers underwater. For example the shark may swim antagonistically or in the White Shark’s case it might open and close it jaws, known as Repetitive Aerial Gaping; much like a dog gnashing.
Should the warning display be ignored the shark might lash out if the movement by the human is oncoming, sudden or perceived to be threatening. Attacks motivated by feeding are most frequently associated with larger sharks and usually result in fatalities. Sharks are especially active around dusk and dawn when most fish are less aware and doppy but these are only times of major activity. Like most super predators, sharks feed whenever there is an opportunity.

Learning about the shark’s behaviour is where Asiatic Marine comes to the rescue…
We encourage the public to spread awareness of the ecological and economic value of sharks, and their special importance as marine wildlife. One unique method in our multifaceted approach to teaching is organising overseas shark diving expeditions. These are exciting opportunities for anybody to dive with sharks in the open ocean. We cater to researchers who want to tag sharks for scientific studies, film crews making educational documentaries and marine tourism- the public who want to simply see and learn about sharks in their natural habitat.

In conjunction with the above Asiatic Marine is the only company in Hong Kong actively promoting shark conservation and awareness by organising extra curriculum talks to local schools, dive shops and societies alike. I am certain there is nobody that knows what species of sharks reside in Hong Kong or what migratory species pass close or through Hong Kong waters. No extensive study on sharks has ever been conducted in these waters, simply due to the lack of sharks to study. They have all been caught, finned and driven out from our waters.
As a result there is a lack of shark data from this region making any type of future shark management difficult to initiate or carry out as long term project.

So our message is this, yes Hong Kong swimmers should be cautious when sharks are sighted but let the reaction be positive based on fact rather than panic driven based on unfair media portrayal of large killer sharks. We should then seek assistance from experts and find out what species was sighted and if the opportunity exists tag and record environmental field data.

All this information can only increase our knowledge since every year we end up hearing about unconfirmed shark sightings and nothing remotely positive. It would also signify a change on the global stage for Hong Kong, however small the contribution. Let us be seen helping the shark’s cause rather than being the focus of the world for utterly decimating shark populations for the shark fin trade.

I think we would all agree that knowing what the tide is capable of bringing in and the better understanding we have of sharing the same water, then inquisitive sharks on the other side of the net, really are not a bad thing at all.

And for all you ocean users, seeing a shark or being stalked by a shark is an exciting and rare opportunity. Don’t take it personally if it wants to investigate you; just give us a ring and talk about it.

The views expressed in the above article are those of Charles Frew/Asiatic Marine.
If you would like more information on shark talks then please contact Charles Frew: [email protected]