If you like scenery, wildlife, and plants, Kadoorie Farm and Botanic Garden (嘉道理農場暨植物園) should be high on your list of places to visit.

If you like scenery, wildlife, and plants, Kadoorie Farm and Botanic Garden (嘉道理農場暨植物園) should be high on your list of places to visit in Hong Kong.

The word “farm” in the name seems almost misleading nowadays – there are some crops grown, pigs and chickens reared, but the farm is dominated by forested hills, with botanic gardens and greenhouses, cages, aviaries and enclosures holding captive animals, and wild birds and other animals that have been rescued and are being cared for.

Kadoorie Farm and Botanic Garden is set in a valley cut into the north slopes of Hong Kong’s highest mountain – Tai Mo Shan, in the central New Territories (north of Kowloon, west-northwest of Tai Po). You enter at a gate at the lowest part of the farm; if you want to fully explore the area, you’ll either have a fair amount of uphill walking ahead, or can take the shuttle bus that links the Farm Produce Sales Counter, near the entrance, with higher places including Kwun Yam Shan and the Kadoorie Brothers’ Memorial Pavilion. (Maybe tickets for the shuttle bus go quickly on busy days, so perhaps best to arrive and book early.)

First, though, you may wish to stroll around the lower part of the farm. 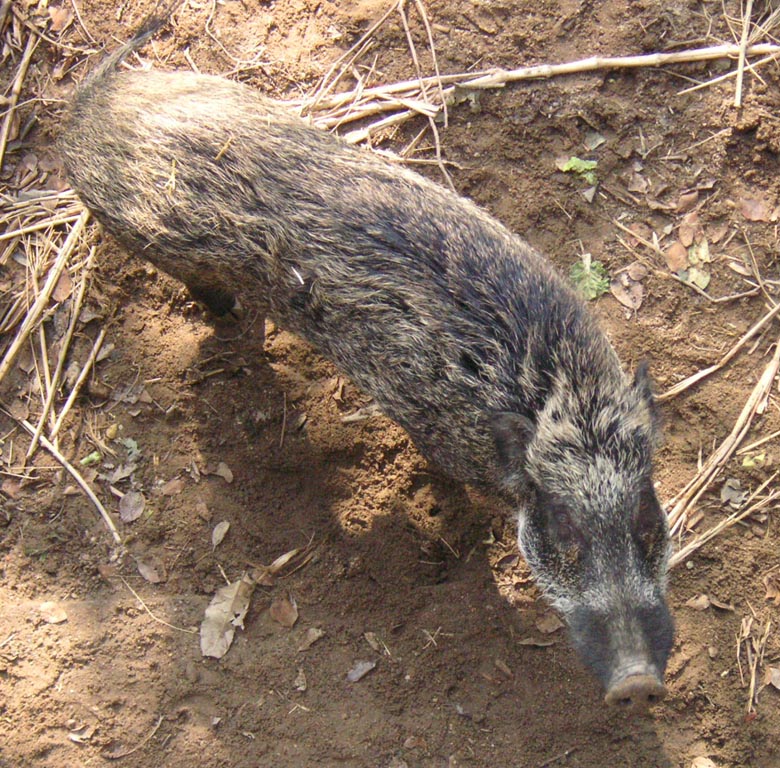 There are pens with some huge, indolent looking farmyard pigs; nearby two wild boar snuffle through sand in their custom-built enclosure (they’ve munched away all reachable greenery). They were very shy at first, but seem to have become accustomed to being watched by people.

The pens have been transformed to an exhibit with the boars and some other local animals, such as barking deer; inside there are exhibits, including on wildlife in South China forests.

Close to the stream behind the wild boar enclosure are facilities housing black kites (and a crested serpent eagle) that have been found ill or injured and are being looked after – hopefully till they can be released; small buildings with exhibits holding fish including the only recently new to science Hong Kong paradise fish, which is only known from Hong Kong, and Hong Kong newts.

There’s also an enclosure with leopard cats, which were all brought in as kittens – they’re around the size of domestic cats, but slimmer, and seem more agile, perhaps better adapted to exploring trees in search of food (no need to call for firemen when a leopard cat bounds up a tree!).

There’s a waterfowl exhibit, with flamingos, ducks and a black-faced spoonbill (which had been found injured at nearby Deep Bay) at small, ornamental pools.

Below this is the Wild Animal Rescue Centre, with way too many animals that should be in forests and wetlands in Asia, but have been captured, traded, and confiscated. (The rescue centre is off-limits to the casual public.)

There are also greenhouses, with orchids and other plants, as well as flowers including sunflowers outside. 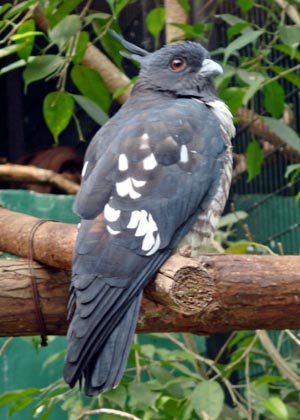 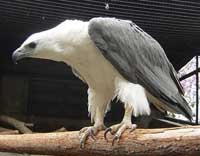 Walk up a little, and there are various breeds of chickens. Also – far more interesting to me – there’s a row of cages with birds of prey that are too badly injured, or too imprinted on people, to be released to the wild. The most attractive was Halley, the white-bellied sea-eagle [sadly, died since I wrote this].

Just across the road from the raptors is an owl sanctuary, with current residents including this splendid brown fish owl. 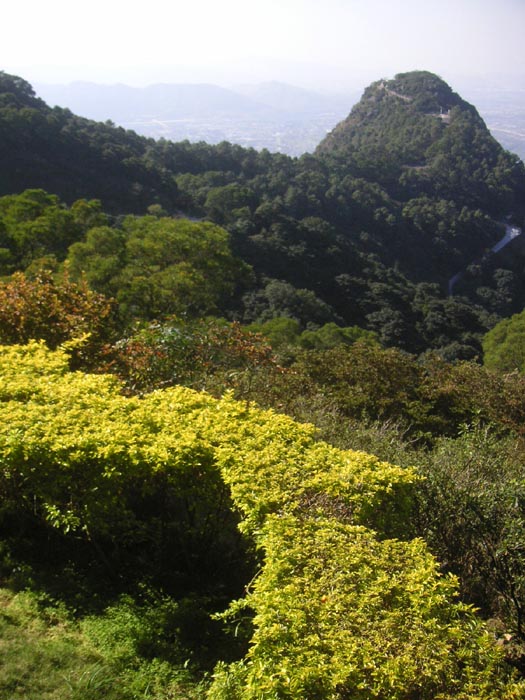 If you ride the shuttle bus – or even hike – you can visit the Kadoorie Brothers Memorial Pavilion, reached by a short path through a moon arch. From its high vantage, the pavilion affords superb views over the farm, and north across a plain to Deep Bay.

The shuttle bus’ next stop is Kwun Yam Shan, a craggy peak that also overlooks the farm and the land to the north. There’s a statue of Kwun Yam, and a path round the north side of the peak, looking out across the plain with Shek Kong, Kam Tin and other villages.

You could walk down from here, passing places including wild hillsides where you have a (slender) chance of seeing mammals such as civets and wild boar, an Orchid Haven (perhaps now a regular stop on the minibus route), a Deer Haven and a Butterfly Garden. You can find your way around using a map on sale at the gatehouse for HK$5; and if you’re going to hike around here you might find my book Hong Kong Pathfinder useful too (and if you want to visit the farm’s website, it’s at www.kfbg.org).

One good place to visit on the way down – seems to me a great place to leave the shuttle bus, as don’t have to walk down very far – is Rainbow Pavilion. This is down a fllight of steps from the road, and is in a superb setting, by a waterfall that’s a cousin of the nearby Ng Tung Chai waterfalls. It’s called the Great Fall; though in winter there’s only a trickle of water – it will be best after rainy spells in summer.

The path drops down by the fall. There’s a right turn, back to the road, which winds down, flanked by some lovely blooms (these shots were taken in December). The raptor sanctuary is close below.

There’s a Farm Shop, selling some potted plants and organic vegetables grown on the farm, as well as books on subjects inc Hong Kong natural history, and the farm itself.
The shop’s in the same building – formerly used for housing pigs! – as a small museum, which has some farm implements, and old photos, including from the early days of the farm – when hillsides mostly looked barren.

The first Sunday of each month is a family-oriented Nature Fun Day; there’s a different theme for each such day.

Oh, yes, if you are heading to Kadoorie Farm by public transport: maybe your best bet’s to take the KCR (East Rail) to Tai Po Market, then bus 64K or 65K – and stop at “Ka Doo Lay Nung Cheung”; the entrance is on your left, just as you crest a small ridge at the head of the Lam Tsuen Valley; it is pretty obvious. (The farm runs a shuttle bus service on Sundays and public holidays: see the website for info.)

An alternative could be to take West Rail to Kam Sheung Road station; bus 64K (towards Tai Po Market) stops outside this.

Entry fee HK$10; free for children under 12, visitors over 60, charities and school groups.

Published or Last Updated on 1 February 2022