Even before I walk into Kam Shan Country park (金山郊野公園) I see macaques, lounging by the side of Tai Po Road, perhaps hoping for handouts or ready to raid waste bins. This one sits atop a notice board, with posters advising how to behave so the monkeys don’t bite.

Happily, the macaques pretty near ignore me as I walk along Kam Shan Road (but I don’t take out any food while in sight of the blighters, lest they dash up n try to grab it). Soon, I’m alongside Kowloon Reservoir; then on the dam, below which is Kowloon Byewash Reservoir.

Beyond Byewash Reservoir – and Butterfly Valley (named as butterflies used to concentrate here in late autumn) are the cranes of Kwai Chung container terminal – a reminder that Kam Shan Country Park is not really a place for escaping the city.

After the dam, I turn left, along Kam Shan Tree Walk; a rough track with signs giving brief info on trees.

The path leads to Kowloon Reception Reservoir, which is small, with low hills around, and high-rises (Wonderland Villas?) just in view.

A sign indicates the start of one of two jogging trails in the park. I walk along, and soon pass my 4th reservoir of the afternoon – Shek Lei Pui.

The jogging trail – one of a myriad trails in this park; by no means all of which are well signposted (glad I’ve brought a map!) – ends, and my route takes me down, back to Kam Shan Road, and the Maclehose Trail.

There are views to the Kowloon Hills, with the sheer southern face of Lion Rock very obvious.

Groups of macaques loiter along the road; her a car arrives, and the driver tosses food out to the macaques, which scamper in, look expectant, and grab whatever tidbits they can. (Illegal to feed macaques now – unless you’ve special permission? – but must be hard to stop.)

The Wilson Trail joins the road, from the other (north) side of the valley I’m walking up. There paths lead to a gap between hills, with paper-bark trees growing by a stream.

I follow the Wilson Trail up Smuggler’s Ridge – which looks far more appealing than the Maclehose Trail’s route, which skirts the ridge.

Further along the ridge, the vegetation is mostly low scrub.

Here’s  view to the 337-metre highest point of Smuggler’s Ridge. Just bey ond the place where I took this photo, the Wilson Trail comes to a hilltop, with small trees hiding most of the view, and drops down to the north; I continued along the ridge, where the path is rough, but affords fine views. 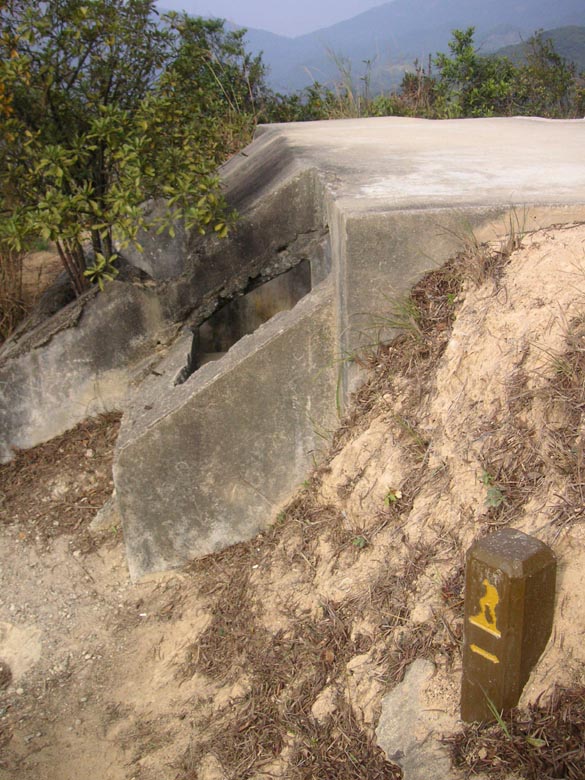 Down from the ridge, at a junction with the Maclehose Trail, there’s a former command post beloinging to the Shing Mun Redoubt – where, during the Second World War, British troops fought to hold off invading Japances forces. (After a night of fighting – most of the redoubt fell in just five hours, the survivors were force to retreat to nearby Kam Shan – Golden Hill; and soon afterwards to Hong Kong Island.)

Inside the command post, there’s this corridor down to a tunnel, which was part of the fortification – linking this post with pillboxes etc built on low ridges. Well spooky! – no way I was going down there, even on a sunny afternoon.

Here, a tunnel runs through a ridge. Perhaps the hole is an air vent; but vents proved convenient for dropping grenades down.

Just below the Redoubt, the path arrives by Shing Mun Reservoir.

I turned left, along a road towards Pineapple Dam (and a minibus to Tsuen Wan). There were macaques at the bottom of this small dam, drinking from the reservoir.

Hiking Hong Kong’s Shing Mun Redoubt has several photos plus info from a couple of intrepid folk who recently explored the defences.
The  Defence of Hong Kong
Shing  Mun Redoubt and the Gin Drinker’s Line has historical info.
The Battle on hongkongwardiary.com also covers fall of the redoubt.