the government is planning a slew of new projects that will transform Lantau for ever.

You can help make a difference – help Keep Lantau Beautiful!

Lantau, surely Hong Kong’s loveliest island, is threatened by a slew of massive development projects. Vital public consultations finished on 28 February (responses will be accepted for some time afterwards) – but do you even know what the projects are, and how they will affect Lantau, Hong Kong, and your future?

Lantau is a beautiful island, with wild mountains, ravines, a myriad coves and beaches. There are so many temples that it was known as the “Island of Prayer”. Villages dot the lowlands, beside old rice fields roamed by cattle and water buffaloes. Yet in the wake of the new airport project, related highways and Tung Chung new town, the government is now planning a slew of new projects that will transform Lantau for ever.

The Government’s Concept Plan for Lantau

Most of the projects are covered in a Concept Plan for Lantau, which was produced by the government’s Lantau Development Task Force after a secret planning process lasting just ten months. This “plan” makes no mention of why Lantau is being singled out for such intense development; it appears no consideration has been given to whether it would be better for Hong Kong to have these or different projects in different areas.

The “plan” is a collection of projects, for some of which planning is evidently well advanced, while others indeed seem conceptual only. They are focused on Lantau’s north coast, where they include:

The landing site for the planned Zhuhai – Hong Kong Bridge;
a logistics centre, where containers and other freight can be handled and transferred;
a tourism centre, with facilities perhaps including an indoor, man-made beach;
a motor racing circuit;
a new theme park.

For the south coast, plans include: 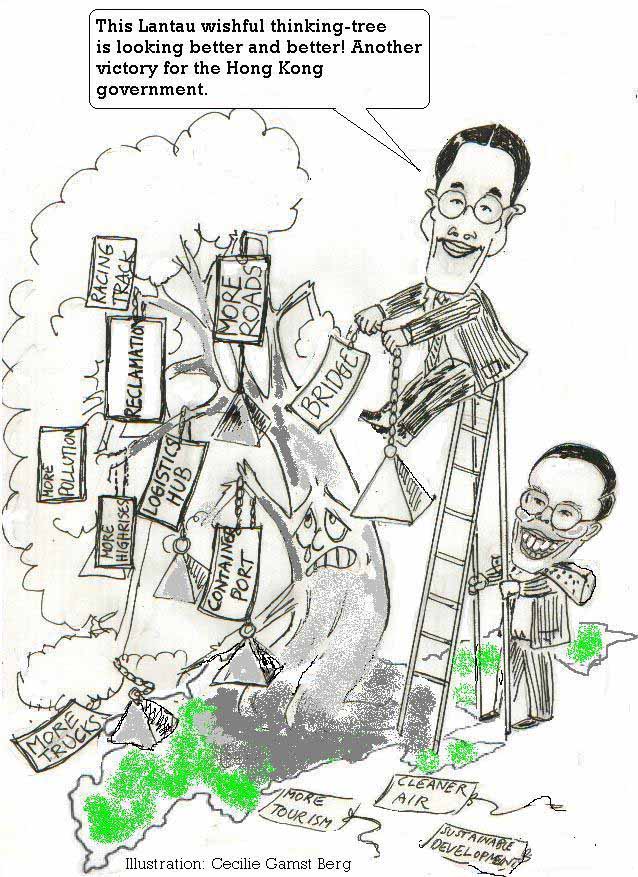 Information so far made available to the public gives little or no evidence that any of these projects are justified. No mention is made of how they will be funded – what will they cost taxpayers?

The plan is silent on what sustainable development actually means. The bridge alone is expected to bring an additional 80,000 road vehicles per day to north Lantau, where air pollution is already severe, with some 60 percent of Tung Chung residents unhappy with air quality. Yet there is no indication, for instance, of what constitutes a sustainable level of smog.

The plan does mention conservation measures. Importantly, a country park extension is proposed, but this is by no means certain, and is not a new proposal. But the plan includes nothing to boost protection of Lantau’s key sites for biodiversity, which are all outside country parks. On land, no nature reserves are proposed; no management plans are proposed. Two marine parks are suggested, without explanation.

A second consultation is also underway, on port development that might include a new container terminal. The favoured site is off northwest Lantau, where an artificial island is envisaged. Some observers believe that without this terminal, the Zhuhai – Hong Kong Bridge will not be economically viable. Yet, for reasons that are unclear, the terminal is not in the Concept Plan. Coincidentally, however, the consultation process for the terminal (port development) project ends on the same day as the consultation for the Concept Plan: 28 February 2005.

Keep Lantau Beautiful is a loose alliance of groups and individuals who believe far more discussion is needed of projects that will have far-reaching consequences – for Lantau, Hong Kong, and indeed the Pearl River delta region.

We believe in sustainable development; economic development is possible without massive environmental destruction, and without depleting our unique, natural and cultural heritage.

While we appreciate the Lantau Development Task Force mentioning the principles of sustainable development and conservation, we believe far more work is needed to realise these goals in tandem with development. In particular, we believe it is imperative to review four key areas that have received little or no attention from the Task Force:

A Conservation Plan for a unique and wonderful island

There is as yet no firm Conservation Plan for Lantau, which should provide a crucial framework for development plans

It is (was) unnecessarily fast – for the Concept Plan, a three-month period spanning three public holidays including Christmas and Chinese New Year – and is one-sided, and perhaps barely noticed by the general public, despite the magnitude of the schemes.

Proposals for a Way Forward

What do you think?

After all, it’s not just Lantau’s future that’s at stake: it’s our future, too.