There is tranquillity to enjoy near Ngong Ping, including along the Lantau Trail.

Though Nong Ping can fairly swarm with tourists, clambering up steps to the Big Buddha and roaming through Po Lin Monastery and along a path through the Tea Gardens, there is tranquillity to enjoy close by, including along the Lantau Trail. 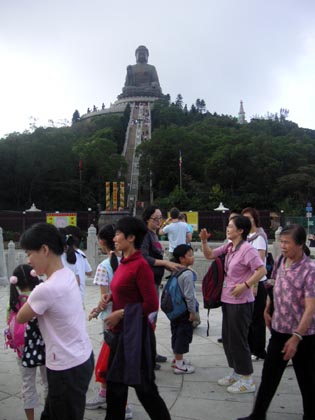 The easiest way to the start of the trail is by bus to Ngong Ping (perhaps from Mui Wo – so taking the Best bus ride in Hong Kong). Here, perhaps visit the Buddha and the monastery; then on, along the path through the old Tea Gardens. 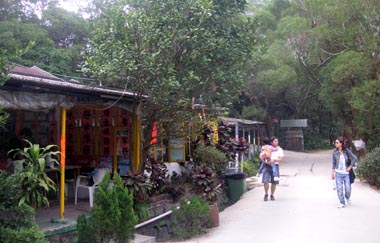 Here, you pass the formerly ramshackle but lately abandoned Tea Gardens restaurant.  [Too bad it closed; and no longer as in this shot.] 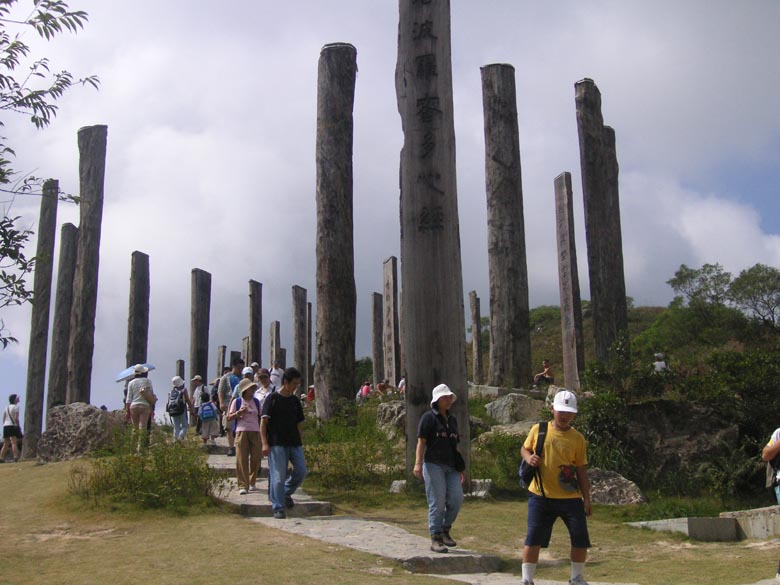 Just beyond the Tea Gardens is a rather curious, newly erected Stonehenge type thingy, made of telegraph poles with graffiti. (OK, so it’s Buddhist calligraphy, carved on timber – yet really, shouldn’t religious artefacts be created for religious purposes, not for tourism, drawing groups of tourists who get yelled at by guides with megaphones?)

Almost unnoticed by at least some of the tourists (that I’ve seen), there are tremendous views here, dominated by the magnificent craggy cone of Lantau Peak. (And yet, former Tourism Board chairman Selina Chow said Lantau is not too good for tourism as lacks “products”; oh dear, what to say, given the hills, the ravines and streams, the beaches and headlands and so on)

The trail formerly dropped down from here, to skirt hillsides north of Ngong Ping. But it has been sliced through by massive landslides, leaving steep unstable slopes, so the trail has been re-routed.

From beside the Wisdom Path, the trail now turns north, then west to skirt round the south slopes of Nei Lak Shan – with excellent views over Ngong Ping. 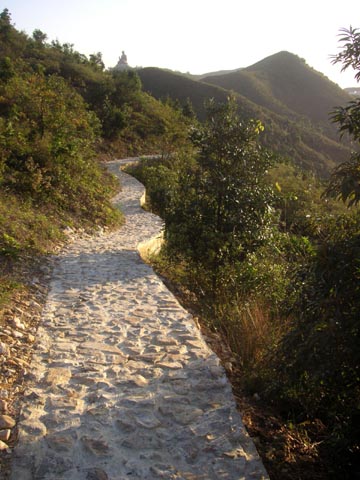 The trail then passes the Ngong Ping 360 station, and drops down along the road, to a road junction and the start of section 5.

Old Route – before massive landslides in 2008:
(seems unlikely this will reopen)

The Lantau Trail dropped down from near Wisdom Path, to angle down the hillside above Shek Pik Reservoir. Just before a steep waterfall (only good after heavy rain?), the trail turned right, down fairly steep rock steps. [NB: a landslide ripped through sections of trail along here, leading to it being abandoned.]