An excellent hike from Sai Kung passes the abandoned village of Mau Ping.

Charles Frew has told me of trails through Mau Ping, within Ma On Shan Country Park – figures they’d be good to include in a book on this and some other parks I’m writing – so I join him in Sai Kung ready for the hike. First, we catch the minibus to Po Lo Che, from where we’ve some yomping to do before reaching what indeed proves to be a superb area. 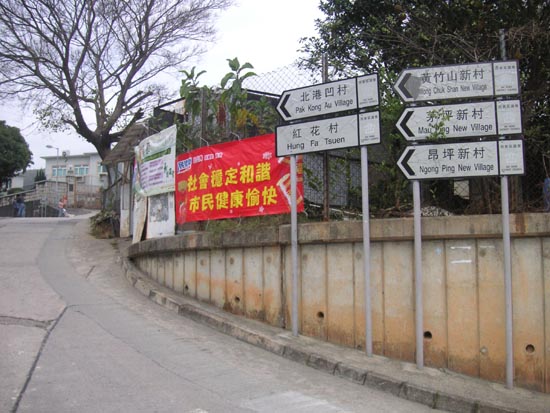 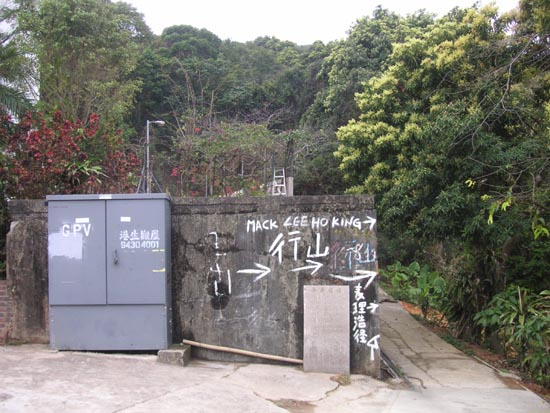 This is a stone trail – one of the old routes that linked New Territories villages before the advent of roads. We climb to the ridge above, where there’s a junction with the Maclehose Trail leading left and right; Charlie leads me straight on, and we plunge down, and into woodland. 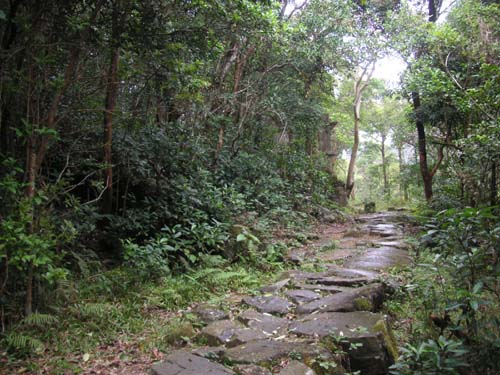 The path’s stones are wet – and as they slope downhill, they’re slippery; care is needed here. But, the woodland is wonderful. 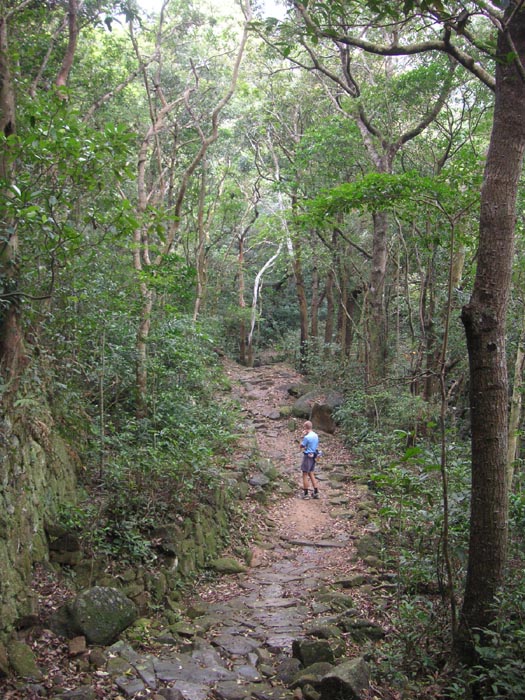 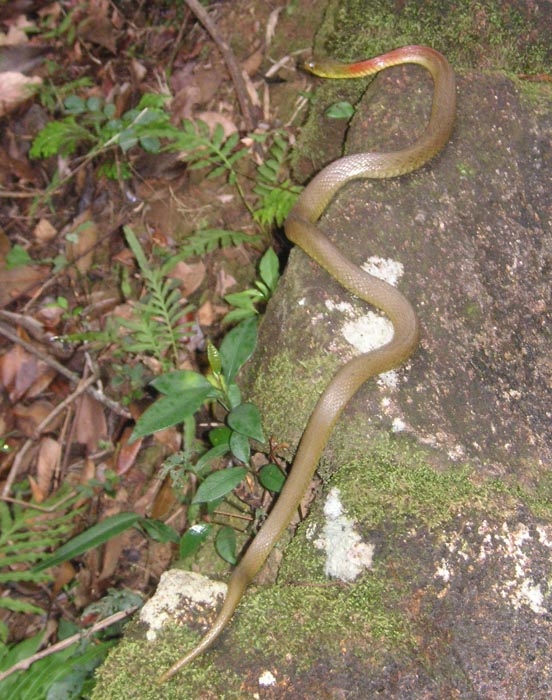 Charlie stops ahead of me, points to the edge of the path: “I walked right by it,” he says of a snake, a red-necked keelback.
Red-necked keelback is a back-fanged snake – with front teeth, and a pair of fangs in the rear of its mouth that can inject a venom that can kill humans. No matter; I move in, and with a deft movement sweep up the snake, and …
err, no – I cautiously take a couple of photos, with Charlie warning me against doing a Steve Irwin. The snake is motionless, then starts moving – away from us, into the forest. 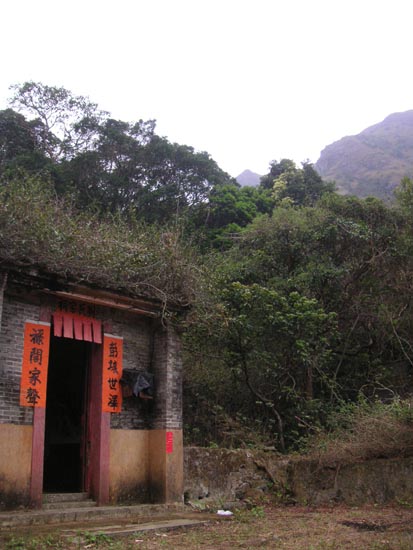 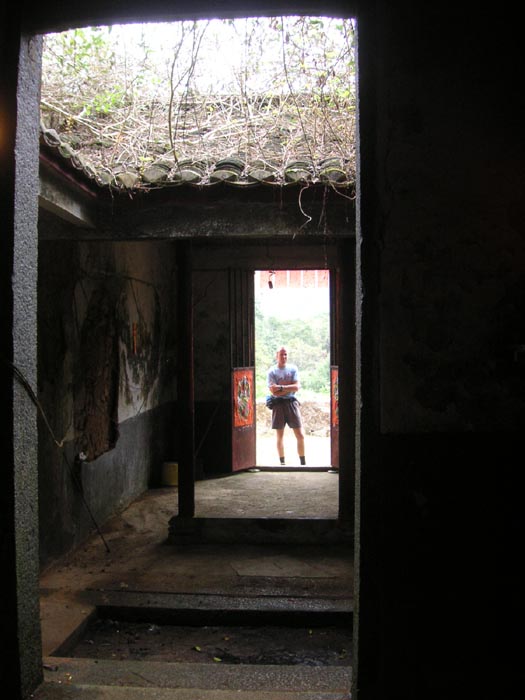 Soon, we arrive at Mau Ping San Uk. Most of the old village has gone, with only ruined houses amidst the trees. But this small ancestral hall is still looked after, though also deteriorating. “It’s like Crouching Tiger, Flying Dragon,” reckons Charlie, looking at the scene of the hall with wooded hills as backdrop. 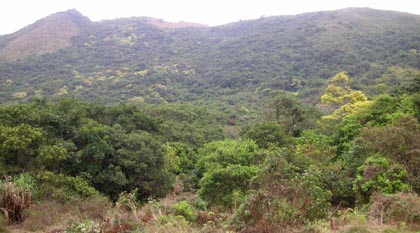 In front of the ancestral hall, too, there are wooded hillsides. There are no other buildings in sight; this is almost like a Lost World in the Hong Kong hills. 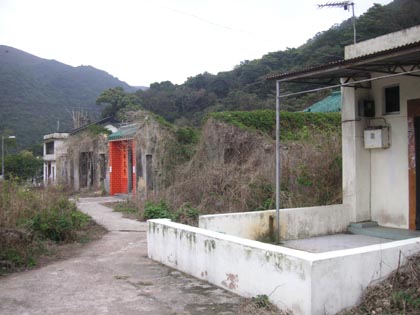 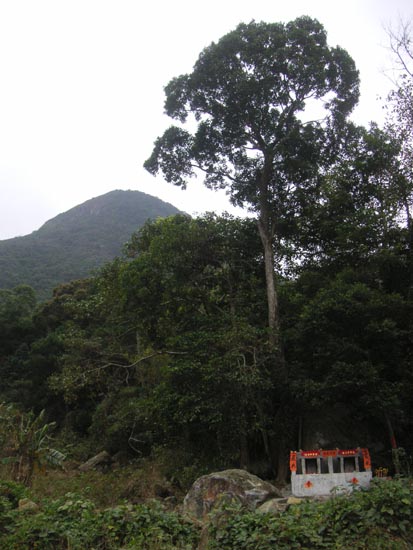 On down, and we arrive at Mui Tsz Lam, where the village is still partly inhabited.
We talk with villagers, who are involved in renovating one house. One man – Mr Ng – says his 87-year-old mother still lives here. She remembers having to walk two hours to Sha Tin or one and a half hours to Sai Kung, to go to market twice a week; also cutting fuel on nearby hillsides, and carrying small bundes of wood to Kowloon, where they sold for maybe a dollar. The fung shui wood behind the village was protected by locals, but when the Japanese occupied Hong Kong during the Second World War, they felled big old trees and took away the timber (to Japan?).

Huge changes are imminent. The fields just below the village have been largely cleared of vegetation; we ask why, learn that New World Development owns the land, and will construct 50 three-storey buildings (for rental/sale to affluent people) and and old people’s home. They had wanted to put up 20-stoery buildings, but permission was removed.

Even with three-storey buildings – having 50 here will transform this still tranquil area. Too bad no one has found a better way to bring some revenue to the villagers, whilst retaining the tranquillity. (I later learn that the Conservancy Association is working with New World on the housing project: hope they do a good job, and the rich residents to be appreciate what they have gained, while the environment loses again.) 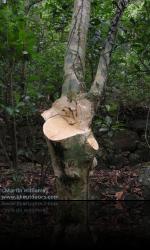 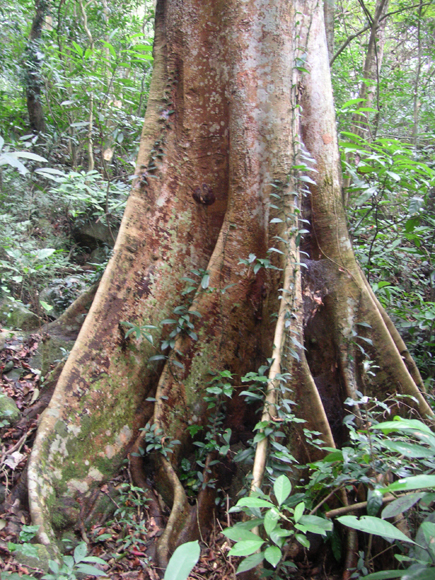 Just below Mui Tsz Lam is Chevalier Gardens, a housing development where there are minibuses towards the city. But, Charlie has other ideas. We head up the trail again, back to Mau Ping San Uk. Here, we hear and see three men chopping at trees – and soon find trees that have been hacked at, apparently with large branches removed. They’re probably mainlanders who have entered Hong Kong illegally, and are here to steal wood of incense trees.

These trees have long been a source of incense used in temples; Hong Kong was named after trade in incense trees, or heung – fragrant – trees. but now, they are rare in China, and Hong Kong’s incense trees are being targeted for illegal “harvesting”.

Nearby is a far happier sight: the massive base of a tree, that has splendid buttress roots as if aiming to becoming a tropical giant, as you might find in Asian rainforests. 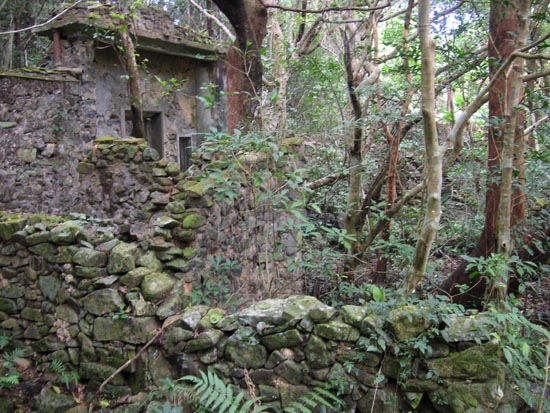 We turn up a narrow stone trail that leads past the super tree, and soon pass ruined houses. 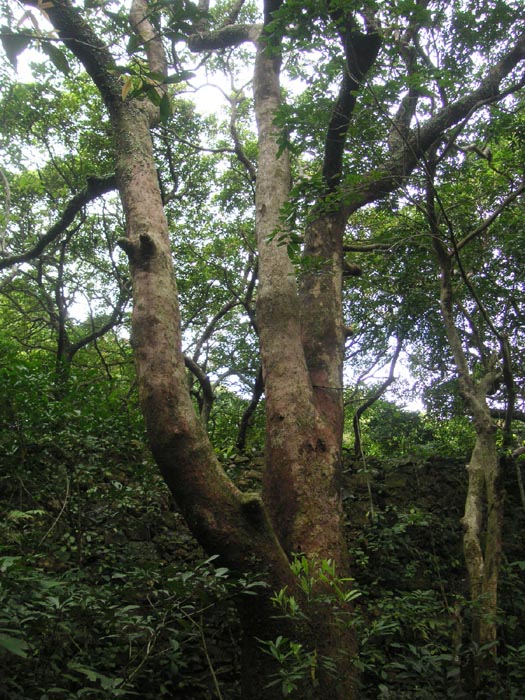 There are more impressive trees at the former village of Wong Chuk Shan. Here, one trail crosses a stream and climbs to the east. The crossing is a great place to linger and enjoy the forest; Charlie notices two Hong Kong newts standing motionless on the bottom of the stream. But our route continues on up the valley side. 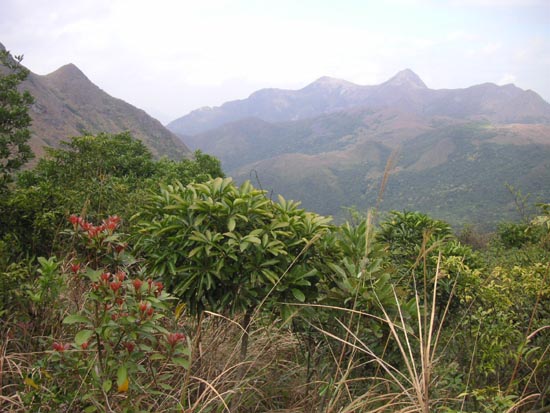 The trail leaves the woods, to cut across the east slopes of Buffalo Hill, with a magnificent vista including Ma On Shan to the north. 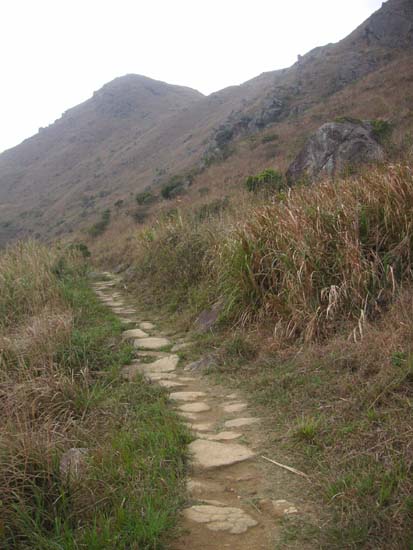 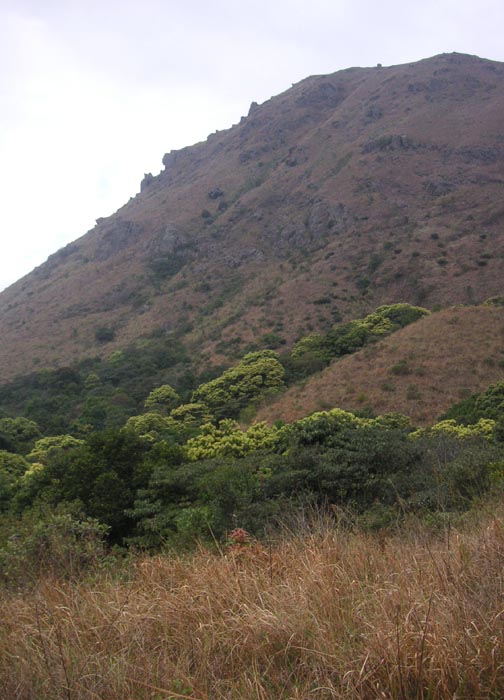 We turn right, along the Maclehose Trail, It’s nice and level.

But, next thing I know, Charlie’s turned off left, and shoots off down a slim steep trail at mountain running pace, becomes a tiny speck, and stands waiting for me; I have to follow.

This trail gives lovely views up the slopes of Buffalo Hill. Then, it leaves the grassland,and we tunnel through dense bamboo, dropping down, down. We enter fung shui woodland, and join another stone trail. There are some more fine trees. But also, more incense trees have been recently chopped; the sound of an axe thwacking into wood tells of more harm being done, further thieving, nearby.

The trail reaches a road leading through the Ho Chung valley; a minibus comes along, and we board, heading down to Hiram’s Highway – Charlie continuing to Sai Kung, while I head via Choi Hung for home – and a much-needed shower, and cold beer.