Despite all the brouhaha, there is no H5N1 at Mai Po. 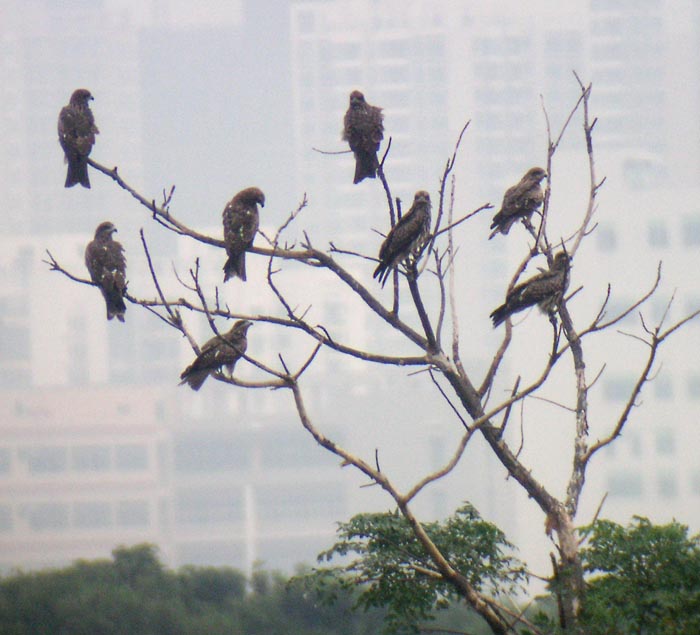 Went birdwatching at Mai Po Marshes Nature Reserve, in northwest Hong Kong, today [1 November 2005]. Whilst there, I grabbed some photos using digital camera thro telescope – including this one.

Now, what do you reckon the Black Kites are doing in this tree?

a) Waiting to feast on the bodies of H5N1 bird flu victims.

b) Feeling very ill, and ready to fall on their backs, legs waving in the air, as they succumb to the great pandemic of 2005: ie Bird Flu Panic.

c) Trying to sit as high as they can, so they don’t get caught up in the hysteria.

The answer – plus more photos and some guff about today – below.

Well the answer is of course resting, since despite all the brouhaha, with several school groups cancelling visits out of fear of bird flu, there is no H5N1 at Mai Po. (None detected despite extensive testing of wild birds; none evident through any jump in deaths of wild birds at the reserve.) 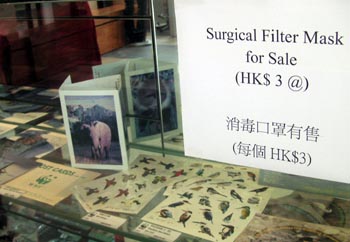 Had a top morning/early afternoon birding at the reserve – even after reading a Special Notice, suggesting that among other protective measures, anyone visiting should “Wash your hands before using your telescope.”

(Didn’t bother buying a surgical filter mask from the Mai Po shop; I’d tried during SARS, didn’t like, plus they’re little use if there is disease like flu floating about anyway. Saw a few schoolkids in one intrepid group that did brave Mai Po wearing these masks tho; how sad that all the ballyhoo has made people scared of wild birds.)

This article and photos are to show what’s typical at Asian waterbird refuges this autumn – ie birds as normal, despite what you might otherwise guess from far too much ado about bird flu. Also gives some idea of birding at Mai Po in early November, albeit on a day with a superb high tide.

Started with a reasonable session birding just outside the reserve – with birds including Silky Starling, and Chinese Grosbeaks perched on telephone wires.

Inside the reserve, walked fairly quickly along main path – aiming to catch high tide from the boardwalk. Stopped briefly at Pond 11, where good numbers of roosting shorebirds, including a Long-billed Dowitcher (had been reported on birdline yesterday). 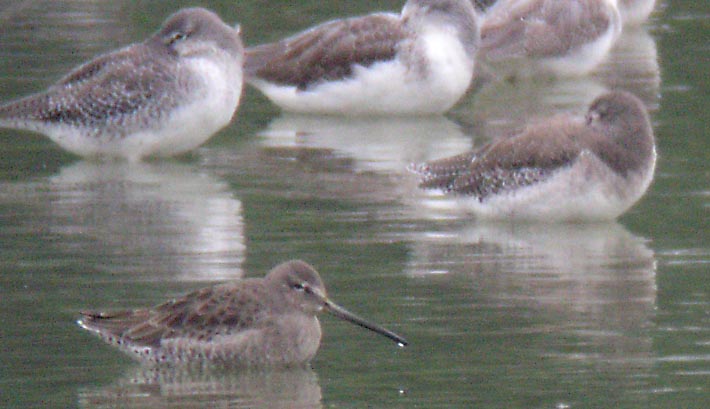 Then, something of a route march to the boardwalk, where tide set to be just high, and set to fall to levels I figured would very soon expose mudflats.

The tide was indeed high; there were perhaps 3000 or more dabbling ducks (Northern Shoveler, Northern Pintail, Eurasian Wigeon) in the shallows near the hides. 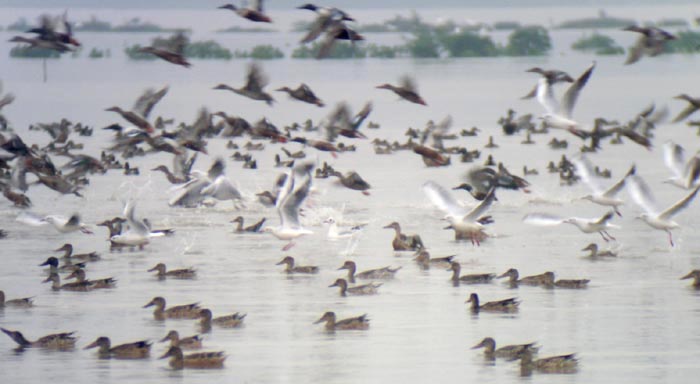 The ducks flew at times, wingbeats making an impressive rumpus. There were a hundred or so Common Black-headed Gulls – many more of these will arrive soon; also a couple of Saunders’ Gulls. 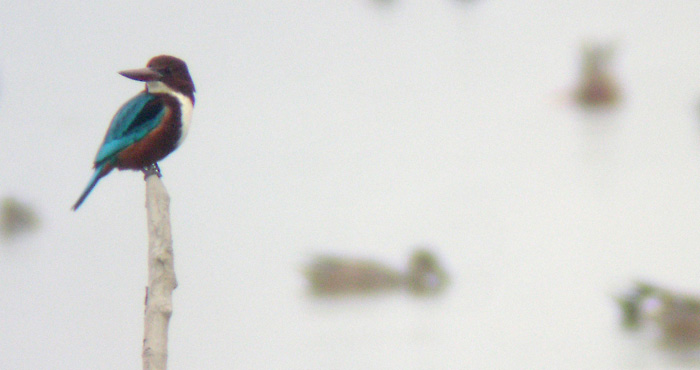 The tide was slow to fall. For what seemed ages (an hour or more), it was almost to the tops of egrets’ legs – way too deep for shorebirds. But at last the water began receding so shorebirds could land; Pied Avocets flighted in from the bay, other shorebirds came in from Mai Po ponds and other roosts. 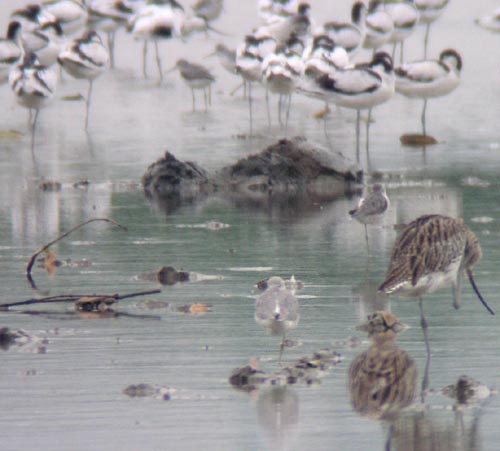 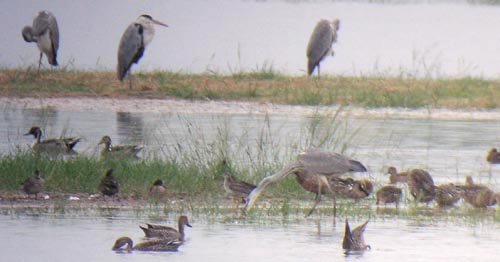 Back inside the reserve, we found lower numbers of ducks on ponds, also plenty of Grey Herons; but missed (overlooked?) two Pheasant-tailed Jacanas. 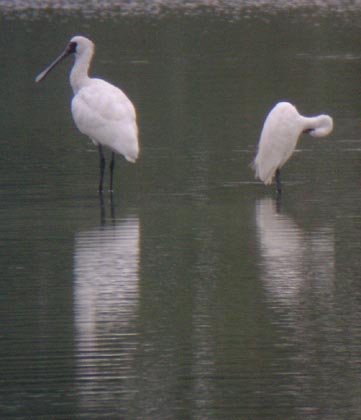 We saw at least 10 Black-faced Spoonbills, including this one (on left) giving fine views (Bird flu? What bird flu?). 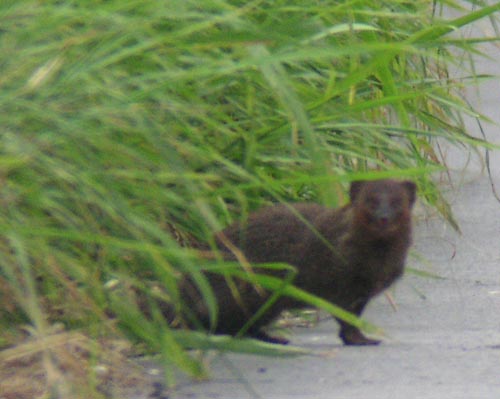 A Javan Mongoose trotted in close, then disappeared into grass. 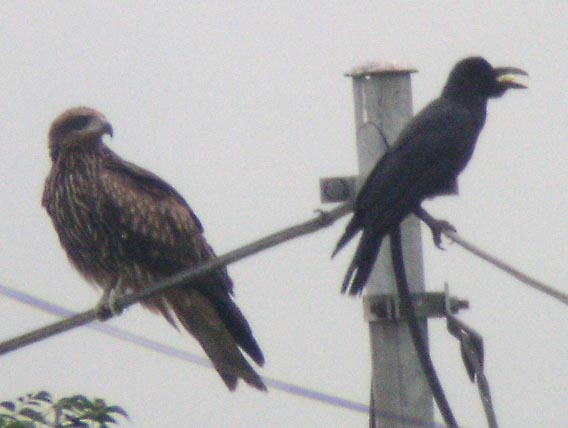 There were plenty of Black Kites. And this Large-billed Crow, maybe having a laugh at humans worrying so much about a disease they have created through poultry farming. 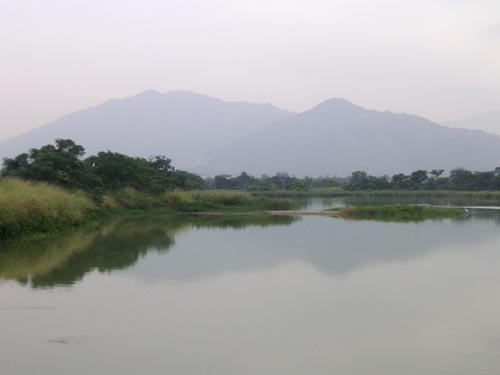 For all the hoopla about migratory birds around the world, the reserve was wonderfully tranquil.

See also article on this site about Birding at Mai Po Marshes.