When Typhoon Vicente slammed Hong Kong on the night of 23 July 2012, the wind and waves rocked a freighter, tossing six container-loads of plastic pellets into the sea. Containers were torn open, and soon there were reports of pellet bags and their contents being strewn along beaches. First in Discovery Bay, then elsewhere, environmentalists highlighted a “Plastic Disaster”, which even gained its own Facebook page.

Though photographer and eco-campaigner Gary Stokes compared the incident to a “solidified oil spill” I wondered just how disastrous it would prove. After all, living on Cheung Chau I am well used to seeing a host of plastic items and other rubbish floating in the sea and washed up on tidelines.

Joining volunteers who came to clean pellets at Cheung Chau on 5 August, I wondered even more. Most were picking pellets from gazetted beaches with daily cleaning services. I took five volunteers to a secluded beach without any government organised cleaning, which is a black spot for waterborne refuse. 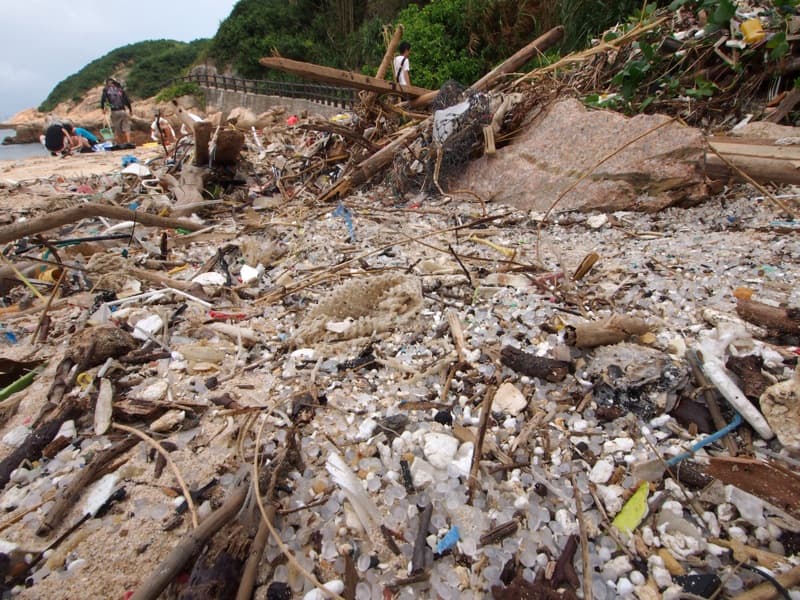 Sure enough, pellets abounded at this beach: in places, you could grab them by the handful. Yet there was far more other rubbish, especially polystyrene. A few people were already gathering some of this, shoving it into big garbage bags for later collection. Among them was Nico Zurcher, who told me he had obtained a master’s degree partly through studying plastic pellets on Hong Kong beaches. Even with this expert background, Zurcher seemed unsurprised by the spillage, given plastic pellets have been accumulating on beaches for years: so I figured it worth considering if it really is a “disaster”.

That certainly applies in cases such as the Exxon Valdez oil spill, which occurred in March 1989 as an oil tanker ripped on a reef and flooded an Alaskan inlet with oil. Perhaps 100,000 to 250,000 seabirds were killed, billions of salmon and herring eggs were destroyed, and it may be another two decades before some shoreline habitats recover.

The Exxon Valdez spilled at least 260,000 barrels of crude oil, weighing 45,500 tonnes or more; the Hong Kong freighter lost 150 tonnes of plastic pellets, around half of which have been recovered. While the oil spill affected a near pristine area, the pellets were churned across Hong Kong waters. 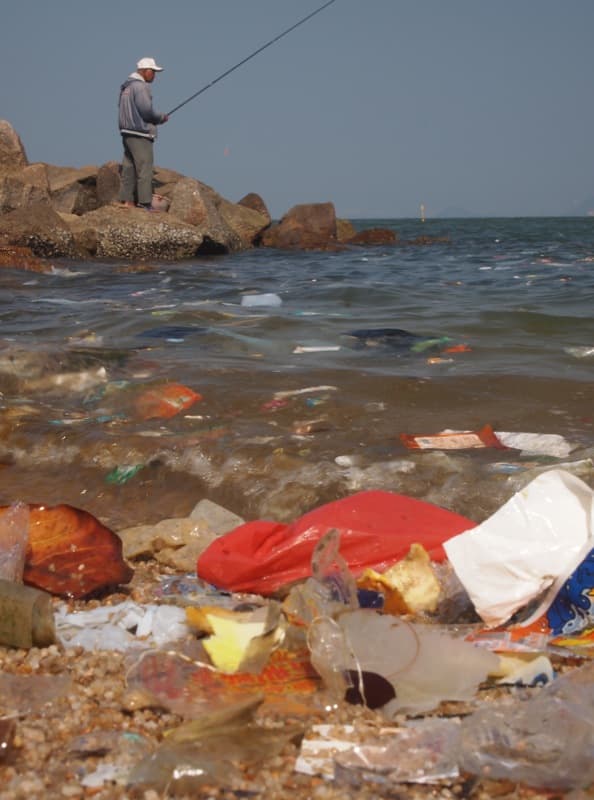 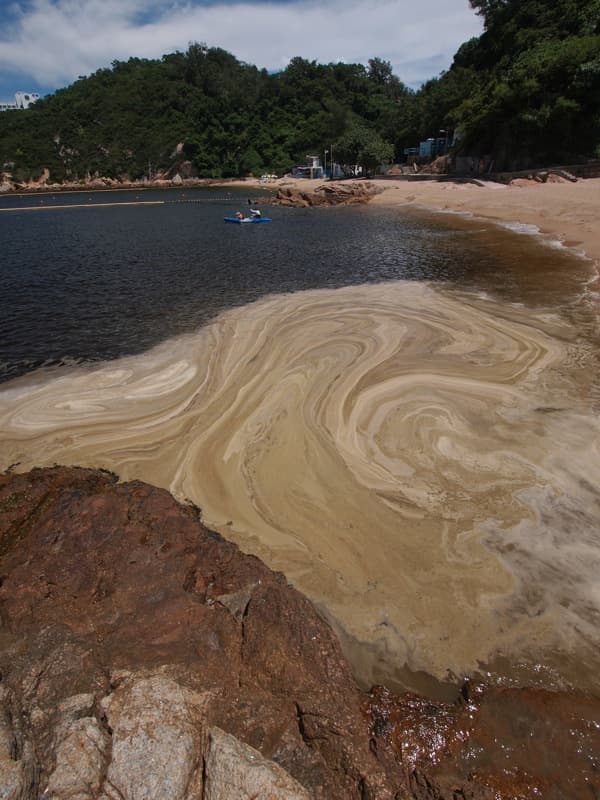 And Hong Kong waters are far from pristine. I’m well used to seeing rubbish along shorelines from Tung Ping Chau in the east to the Soko Islands in the southeast. During summer, western waters are often brown with teeming algae. When the algae die, their decomposition removes so much oxygen that in 2006, the United Nations Environmental Program added the Pearl River mouth to the list of global dead zones – low oxygenated areas where nutrients from fertiliser runoff, sewage, animal waste and burning fossil fuels trigger algal blooms.

How might the “solidified oil spill” add to the list of woes? To give me an idea of the dangers posed by pellets, Zurcher kindly sent me reams of reference material, from which I learned that mass production of plastics began within the last 60 years, and plastic debris can now be found on shorelines worldwide. Based on his fieldwork, in 2009 Zurcher estimated micro pellets constituted around half the plastic pollution on local shores.

The pellets spilled during Vicente are known as nurdles, and intended for manufacturing plastic items. They tend to float, and seabirds and fish might mistake them for food items; dead seabirds have been found with stomachs full of plastic. The surfaces of the pellets can attract organic chemicals that likewise tend to concentrate on the water surface.

As the pollutants include toxins such as DDT, some researchers are concerned that marine creatures may eat poisoned pellets, and further concentrate the chemicals in the food chain. No one knows for sure, though a Japanese project – International Pellet Watch – is sampling pellets as a way of monitoring marine pollutants around the world.

With fears the pellets will become more toxic over time, WWF Hong Kong has arranged for teams to make a series of outings to check for pellets, and cleanup beaches. “I was so shocked to see most of the beaches were covered by thick layers of broken polystyrene,” notes senior conservation officer (marine) Samantha Lee. “The ocean rubbish will not only affect human beings, but will also affect marine habitats and species.”

Doug Woodring, co-founder of the Ocean Recovery Alliance, is dedicated to reducing plastic debris in the oceans. He too believes the cleanup efforts are important, as the pellets would otherwise remain in the sea for years to come, acting like magnets for toxins. “Hopefully this can bring a new wave of awareness about plastic use overall,” notes Woodring, who advocates a rebate program for all plastic bottles.

This newspaper earlier quoted Professor Rudolph Wu Shiu-sun, director of the University of Hong Kong’s school of biological sciences, as saying the pellets were unlikely to have a “disastrous” effect. Similarly, Nico Zurcher considers the plastic spill may have been a bit over-hoped – yet has caught people’s imagination. 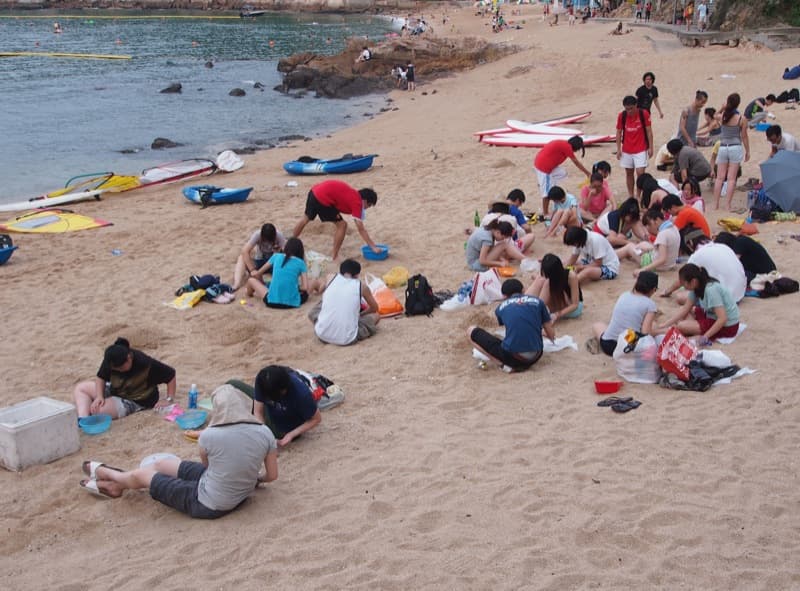 It certainly has caught people’s imagination. Thousands of volunteers have joined cleanups arranged by at least 14 organisations – their actions in turn helping prompt responses from the government and Sinopec, owner of the pellets. Some beach cleaners have stuffed garbage bags with rubbish, others have spent hours sifting sand to find pellets.

The scale of the volunteer effort is unprecedented in Hong Kong – and this may yet prove the most significant aspect of the plastic pellets spill. Just as the pellets and other debris are a visible reminder of ways we mistreat the sea, the teams of volunteers are a sign that Hong Kong people want cleaner beaches and coastal waters – and are ready to put their hands up when needed. Now, we might hope that some officials take note, and likewise act to change things for the better.