Though it lies just three kilometres off the southeastern tip of Hong Kong Island, Po Toi (蒲台島) is one of those places that are easily overlooked when planning a rural outing. It is popular with junk parties – who gorge on seafood in restaurants set in a sheltered cove, and perhaps muster the energy for a waddle to a temple. And boatloads of day-trippers arrive on Sundays and public holidays, and are frog-marched along trails past the main scenic spots.

But Po Toi deserves more attention; especially in summer, when the hiking here is just sufficient to be taxing in the heat, and there are days when you can appreciate the setting of this and a host of other islands in the tropical, South China Sea.

The public ferry – a Spartan craft – departs Aberdeen and (on Sundays and public holidays) and arrives without fanfare at the pier by St Stephen’s Beach, then trundles out past Stanley Fort and Beaufort Island, and rocks where fishermen sometimes lurk. It berths in Po Toi’s main cove, on the western shore.

Just three decades ago, Po Toi was home to around a thousand people, most of whom lived around this cove. But, drawn by the booming city and driven out by mainland marauders, all but a handful have since left. There are ruined buildings amongst trees by the pier; others are scattered nearby, and many more must have long since vanished, smothered by shrubs and climbers.

A short way up from the pier, at a junction, is a store run by two long-term inhabitants, Mr and Mrs Ng. Here, in winter, you can buy seaweed they collect from the shoreline – it’s reportedly good for a range of ailments. Turn right at the stall, and the trail leads to another junction, marked by a wooded signpost.

A flight of concrete steps leads uphill from the signpost, towards the ridge above. The trail is sheltered at first, as it passes through dense, young woodland. But trees give way to scrub and grass, and there are views of the cove below. On the right, a side-trail leads to Old Mo’s House – also known as the Ghost House, a ruined building where Japanese soldiers stayed during the Second World War.

The concrete steps end and the trail appears to fizzle out – though actually keeps climbing, mostly over bare rock. Then, there are steps again, to a trail junction on top of the ridge. Here, you can look east across the rolling, granite hills of the island’s interior; they’re carpeted with low, swarthy vegetation – including crape myrtle, which in summer adds splashes of colour to the landscape with its purple blooms – and pockmarked with boulders. You can also choose which way to head. Left is the Rugged Trail, a rough track through the scrub and across bare rock that strikes out along the ridge, then angles down to the temple. On the right is the concrete trail, towards Po Toi’s southern headland.

After passing a pavilion with cracking views over the sea and islands to the south, the concrete trail abruptly tumbles off the ridge, and onto the headland. 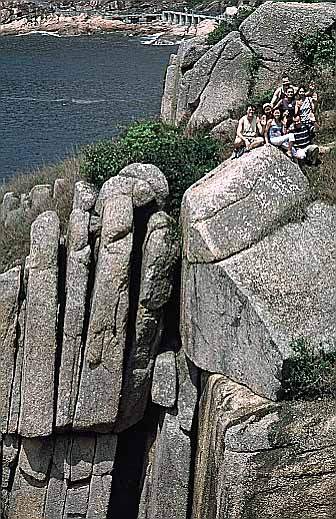 “While you are wandering on Po Toi Island,” advises a website from the Islands District Council, “remember to open your heart and let your imagination fly. Otherwise, you will not be able to look at the rocks in another perspective and [will so] miss the turtles, the monks, and even the unicorns and castles on (sic) the clouds.” This southern headland is just the place for looking at rocks with your imagination flying, as it boasts Turtle Rock, Monk Rock, Supine Monk, and Palm Rock – though my imagination seems to have remained well grounded on my visits, as I’ve only “seen” Palm Rock. But even if rocks look only like rocks, this is a fine place to visit. 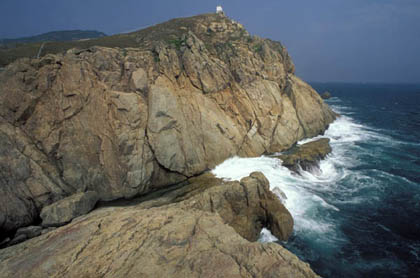 A path along the spine of the headland leads to a squat, automatic lighthouse, then turns down to the west. There’s a trail from here to the tip of the headland. Here, the granite has been stripped bare; it’s cut with deep fissures, dotted with small pools – and, if your imagination flies – looks more like the surface of another planet than a corner of Hong Kong.

This vies with one of the Soko Islands for being the southernmost land in Hong Kong; it’s also one of the territory’s wildest and most dramatic headlands, with the sea forever churning and tugging at the cliffs below.

From the tip of the headland, a trail winds along the coast, towards the cove.

It passes the granite sculpted by the elements into Palm Rock, skirts a tiny beach, then crosses a small footbridge erected by those powers-that-be who seem dedicated to plastering the countryside with concrete (happily, the slope protectors haven’t arrived here – yet). There are steps down to a rock carving; but while this is of historic interest, it’s far from spectacular to look at.

The path runs through small fields with a smattering of vegetables, then across the patio of a farmhouse that’s become a simple restaurant – not a great place to eat, perhaps, but a boon on hot days when, especially fresh from the fridge, even carbonated drinks are like nectar of the gods. Past here, the trail is close by the ferry pier.

It’s possible to now set off to complete a figure-of-eight tour of Po Toi, by walking back up to the ridge, and taking the Rugged Trail. But if that seems a tad excessive, there’s a far easier way to the temple at the trail’s end. Head through the Ngs’ seaweed store, and keep to the path through the village by the cove. 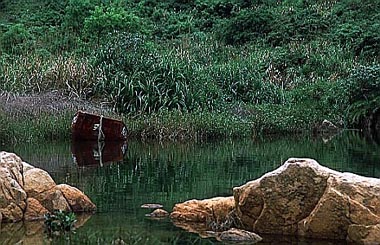 There’s a footbridge across a stream, with a tranquil pool on the right. Then, there are seafood restaurants, and buildings at the heart of the village. Beside them are big old banyans, which sometimes attract good numbers of migrant birds such as warblers, flycatchers and vagrants to the South China coast.

There are tiny houses clinging to the rock, and the path arrives at the temple, which is perched on a headland at the mouth of the cove. As you would expect of a temple in a Hong Kong fishing community, this is dedicated to Tin Hau. There isn’t much to see inside, but the temple courtyard is a pleasant spot to linger, and watch boats coming and going.

All being well, there’s now time for a well-earned seafood meal at one of the restaurants in the cove, before joining the crowds for the waddle to the pier.

Getting There
At weekends and on public holidays, a small ferry runs to Po Toi from Blake’s Pier near Stanley Plaza, Stanley, on Hong Kong Island; operator is Tsui Wah Ferry, and ferries also run between Aberdeen and Po Toi, on Tuesdays, Thursdays, Saturdays, Sundays and public holidays: timetable here.