So far, Sun Hung Kai seems to have a really poor record of activities at Sham Chung. [No answers forthcoming to these questions.]

Several months ago, I heard that – through the Business Environment Council, which SHK Properties is a member of – Sun Hung Kai might be interested in answering some questions on their activities at Sham Chung. I wrote some questions, but so far have heard nothing.

So, if anyone from Sun Hung Kai pops by this site, perhaps they can contribute some answers.

So far, Sun Hung Kai seems to have a really poor record of activities at Sham Chung.
Notably, the old paddyfields area that was rated Hong Kong’s fifth best freshwater marsh has been trashed. At the time, this was the world’s top known site for the black paradise fish, but we now know this fish is actually the Hong Kong paradise fish, known only from Hong Kong. 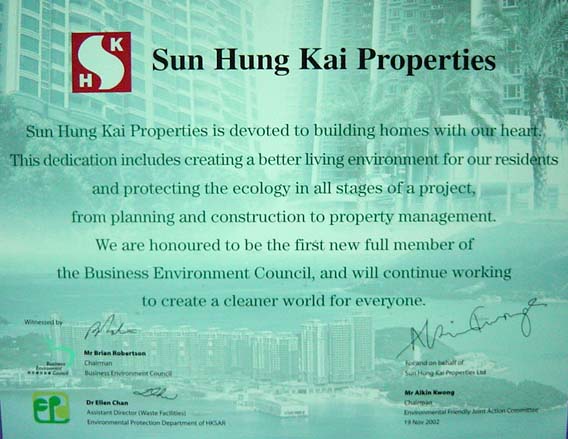 – Are there any regrets within Sun Hung Kai regarding such environmental damage, or is it just part of business: you’re showing environmental concern by joining BEC, but when it comes to Sham Chung, do you care only about the bottom line? {Sun Hung Kai Properties’ enviromnental commitment seems even more questinable now you’re involved in plan to pull down brand new aparement buildings in Hung Hom.]

It also seems there has been work at Sham Chung that was supposedly by villagers or other organisations, but to some observers it appears this was a smokescreen, with work aimed at helping you build a golf course, or resort. [[Examples are the organic farm for disadvantaged children – just a façade? – and some field clearances by villagers.]]
Maybe, too, there was – and still is? – a belief that if the former ecological value of the old paddyfields is destroyed, and this area remains poor for wildlife, it will in future be far easier to obtain the go ahead for development. Even grass cutting is perhaps to minimise value to wildlife, to stop protected wildlife becoming established on cleared land.
– Any thoughts on these points?

What of your previous and current plans for the site? There have been reports regarding a golf course – golf course holes were built, but not used. Also a resort. Anything else?
It rather seems these plans were made by people who had little knowledge of or liking for Sham Chung: is that true? [I’ve seen a sketch showing a lot of resort bungalows built along a winding track/road; looked like it had been just drawn on a map by someone who had never been to Sham Chung.]

So now, the situation at Sham Chung is a mess; Hong Kong’s fifth best freshwater wetland is gone, green groups are unhappy, villagers are unhappy (perhaps both those who support and oppose developments like a golf course), Sun Hung Kai is surely unhappy. [Maybe not so much now the government has come up with a conservation policy including this site, allowing some development on ecologically poor areas – tho really, that shouldn’t include areas that have been recently screwed, should it?]

Are you interested in looking at options that might make for a com-promise, might even make Sham Chung a good or great example for eco-tourism/sustainable tourism in Hong Kong? [Assuming such op-tions haven’t been looked at in detail; does not seem so.]
Might not be as profitable as a golf course or unimaginative resort; but just might make money – eco-tourism is big business worldwide, but is so far its potential has been barely tapped in Hong Kong.

There must be many possibilities to consider (again, assuming not all already looked at in detail); including:
 Renovate existing houses, so they still look great outside – they seem in harmony with the landscape – while inside might be good overnight accommodation for people working in the city, and some overseas tourists, as well as restaurants (with Hong Kong’s premier al fresco dining?), perhaps living folk museum, centre with information on wildlife;
 Museum aspect could also include some of the old fields – maybe with rice grown again, buffalo used to till soil [I’ve been to a Folk Village {Museum} in South Korea that was very popular: http://www.lifeinkorea.com/Travel2/kyonggi/219 If South Korea can have folk villages, surely possible in HK too]
 Nature trail, including the old woods;
 Cycling track, linking to other parts of Sai Kung Peninsula;
 Recreated freshwater wetland, improving on the paddyfields, and of course with the Hong Kong paradise fish;
 Maybe viewing facilities for nesting White-bellied Sea-Eagles (if they nest again);
 Kite flying, as former residents say they are planning.

Might be busy during daytimes on weekends and public holidays, but quiet otherwise, including in evenings;
Potential, then, for a relaxing resort (in one of the hamlets?) for businessmen – paying “good” money. We know someone [Andrew Jones] who could perhaps advise on this; he has helped establish award winning, low density resorts;
There’s perhaps also potential for targeting companies, by offering team building and related courses.

Unlike many of wilder parts of Hong Kong, Sham Chung is easily accessed – might be even easier if, as possible, the Science Park has quay for boats that can serve Sham Chung and other places in Tolo Harbour. So, might be possible to bring in money – whilst protecting the environment and wildlife, making a balanced development.

If you wish to explore such options, several people would likely be willing to help. What do you think?