With its traditional hamlets, old woods, setting in a basin ringed by hills within Sai Kung Country Park, Sham Chung should be one of the jewels in the crown of wild Hong Kong. Instead, it has suffered environmental vandalism. 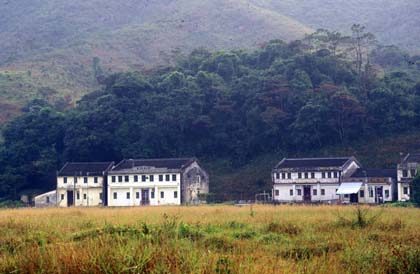 Though the situation just might turn ugly, there’s also ample opportunity for beneficial schemes. (The shot on the right shows the area in December 1998; though the old paddyfields have been trashed to create a never used golf course, it’s still a lovely place.)

Like Shalotung and too many other former rice growing areas, Sham Chung’s predicament dates back to the period when country parks were established, and villages and fields were excluded so villagers could continue their farming lifestyles. Farming soon became unprofitable, and many villages emptied as people moved to the city, and even emigrated.

Not surprisingly, developers saw opportunities in these old village areas, and began buying land and properties. Sun Hung Kai bought much of Sham Chung, with a view to developing a golf course. But it appears that by the time Sun Hung Kai was ready to create the course, Hong Kong’s environmental regulations were tightening. The company did not take a direct approach to the course.

Sham Chung paddyflelds destroyed – and for what?

Instead, when former paddyfields were cleared in 1998/1999, much of the work was supposedly not by Sun Hung Kai. An organisation even leased part of the land, to create an organic farm for underprivileged children. 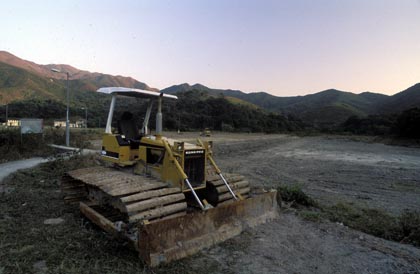 I visited the area at this time, and saw expanses of bare earth where there had been marshes – Sham Chung had been rated Hong Kong’s fifth best freshwater wetland, yet now much of it was destroyed. I saw the organic farm, with a timber gate and a sign, yet this never seemed used, never seemed visited by the underprivileged kids.

In time, a few golf course holes were created – maybe by Sun Hung Kai, I’m not sure. But then, they too weren’t used. The “organic farm” and the golf holes were almost abandoned. It seemed the wetland destruction was for nothing.

But Sham Chung couldn’t remain in limbo, there was too much at stake. “The villagers had sold their land – on paper – to the developer,” says Looking Cheng, head of Scientific Research and Conservation for Green Power. “But they haven’t received all they were promised. And Sun Hung Kai is still very keen to develop a golf course, or a residential resort.”

This spring, it seemed several villagers – all but one of whom no longer live at Sham Chung – were intent on going it alone with developments, maybe making Sham Chung a place people could fish, play golf, ride bikes. Sun Hung Kai said it was renting them the land; a villagers’ representative denied this. Other villagers – including one of the two men who still live there – were opposed to these schemes; they didn’t want to see trees torn up, streams damaged.

Sham Chung attracted more attention from conservationists. In 1999, 202 paradise fish had been rescued by two fish experts from Kadoorie Farm; research since showed these were a new species to science: the Hong Kong paradise fish, known only from Hong Kong. Teams of naturalists discovered the paradise fish survived in Sham Chung, and recorded a wide diversity of other wildlife, including brown fish owl, a huge owl that’s rare in Hong Kong.

James Wong, a Sai Kung based birdwatcher who’s among the volunteers surveying Sham Chung, says he’s worried that some villagers might be planning to illegally sell paradise fish, and might even make a fence to stop people readily accessing Sham Chung. “If there’s a golf course, less people will visit, many species will disappear, and there’ll be pollution,” he says.

While Wong opposes development at Sham Chung, there’s surely scope for an eco-tourist venture, to benefit villagers, Sun Hung Kai, and this wonderful place and its wildlife. The houses could be converted to comfortable accommodation, restaurants, even a “living” museum; at least some of the wetland could be restored, nature trails built, cycling routes laid out. The area is ideal, the time seems right, but are Sun Hung Kai and the pro-development villagers willing?

Just been informed Sun Hung Kai has no development plans for Sham Chung; they can’t see potential without an access road.

Kind of good; but too bad the wetland was trashed.