Plans for the Hei Ling Chau superprison [by east Lantau] have been scrapped!

Plans for the Hei Ling Chau superprison have been scrapped! for time being at least (news on 13 October 2004), evidently because of opposition, which is mentioned here; perhaps our petition helped a little.

If you live in Hong Kong, you’re probably aware of the government’s plans to build a “super-prison” or “super-jail” at Hei Ling Chau, a small island off the east coast of Lantau.

According to a feasibility study, this will have up to 7220 penal places – enough to include all the Hong Kong Island and Kowloon prisoners, together with reception facilities and extra capacity to meet a forecast growth in population (hmm, these population growth forecasts have lately proven too high).

There will be a substantial reclamation along the west coast of Hei Ling Chau (occupying most of the typhoon shelter visible in this photo, taken from Lantau), a seven-storey prison, plus a 2-2-kilometre bridge for a road to Lantau, landing at a headland just south of Mui Wo.

Besides having a great impact on Hei Ling Chau (which is relatively unspoiled; there is a facility for drug offenders), this hideous sounding scheme will have a major impact on the scenery – affecting a wide area including eastern Lantau, nearby Peng Chau, approaches to these islands and Cheung Chau: affecting not only residents, but also tourists (and tourism is a key industry here; Hong Kong is “promoting eco-tourism”, isn’t it?)
{mos_sb_discuss:12}
Green groups have blasted the scheme; one group – the Living Islands Movement – formed in order to battle it, and the website had a page with info and edited photos showing the likely visual impact. I’ve started a petition against the superprison (if you only want to comment, maybe anonymously, please use the forums; or if you wish, you could directly email the Civil Engineering Department with your views (before 31 July, supposedly; not sure if still useful to send missives). I’ve emailed, including with link to the petition; and likewise emailed petition link to the Environmental Impact Assessment consultant, Mott Connell.

Hei Ling Chau lies off the east coast of Lantau; in this photo, from Tai Mo Shan, it’s the main island on the left. It’s in a real nice, relatively part of Hong Kong. (You can just make out Cheung Chau at far left; to the right of Hei Ling Chau is Peng Chau.)

I was encouraged to start the petition after receiving this email, from Jenny Quinton (sent on 3 June 2004):

Dear Everyone,
I have been involved in this ridding of the Superprison project for over
one year now.

The consultation is now over and we have a few months to protest. I said I
was going to write to the paper about the ills of this Gov proposal and I
will write it very soon. I had wanted to do it long before but I have been
so very busy – almost going under with the other many immediate things that
have kept landing in my lap.

As you know, I have been residing in HK for nearly 15 years and fighting
constantly for the environment. I see so much hope and promise. I love hong
kong.  There have been victories and defeats but whatever has happened I
have fought on. In my devotion to education of our youth and their
well-being i  have managed to get a whole page of this Sat’s Education post
ion Environmental Education in SCMP so watch out for that.

Now I really need your support against the Superprison project. The Gov are
proping to build a superjail for 7,2000 prisoners on Hei ling Chau – an
island off the coast of Mui Wo.  For the last few months I have been
regularly waking up through the night worrying about it and getting tireder
and tireder, not being able to get back to sleep. Tonight whilst I was
worrying ,my thoughts were that I needed to tell myall my friends and to
ask them to help.

I will explain all the arguments against this proposed project very soon,
but for now please can you do what you can and pass on the message so that
we have for united strength against it. Please read and listen to the
letters and opinions that have come in this week in the SCMP so that you
will understnd some of their arguments and grievances.

This weekend I will write. Until then please, please will you write letters
or support by telling people.. Please trust my judgement on this. Please
expand this note to all you know. 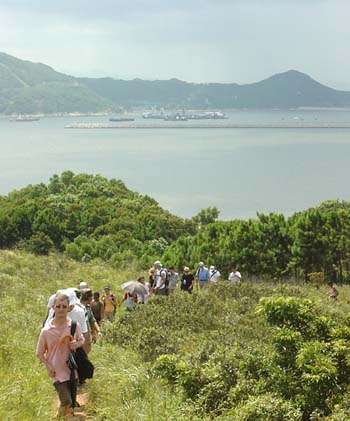 There have been numerous media reports on the scheme – including following a walk organised by the Living Islands Movement on 11 July, during which I took this photo.

On 7 June, the South China Morning Post quoted an unnamed official as saying Hei Ling Chau was chosen as there was little potential for alternative development; a site near the border would be better for factors like access, but was considered irreplaceable for economic integration with China.

On  13 July, the Post carried an item about the Advisory Council on the Environment being briefed on the scheme by security officials. Council members reportedly criticised the officials, including for not considering enough sites, and for perhaps pusing a project that’s too large. “It could be a serious blow to the proposal as the council can reject the environmental assessment report and recommend the project’s rejection by the director of Environmental Protection.” Great!

This is an acknowledgement of your email dated 11 June 2004. Thank you for giving your views on the proposed land formation and infrastructure works for the prison development at Hei Ling Chau.

Note:
The following information can be found at our website [defunct?] www [dot] ced.gov.hk/eng/projects/hlcfs/hlcfs_f.htm:
– Consultation Digest – giving the key findings of the option assessments and details of the preferred option of land formation and fixed crossing; and
– Information Pamphlet – providing background information of the prison development project.”

If you’d like to write to protest against the project, here’s a suggested letter, from the Living Islands Movement (with apologies if layout goes skew-whiff):

Proposal to site a Superprison on Hei Ling Chau Island.

Having studied your documentation, I have concluded that ALL the alternatives proposed are unacceptable.  They would all unnecessarily and irreversibly despoil a scenic area, and create a huge blot on the landscape.  The bridge would also be visually quite unacceptable, and the prison would bring extra traffic to the South Lantau Road.

It is obvious from reading your documentation that Hei Ling Chau is the wrong place to build it.  Throughout your documentation, it is quite clear that the proposed Superprison could be built anywhere, and having it on an island necessitates 2 billion further taxpayer dollars for a bridge

Things like this should be built on already blighted land, and not in scenic areas.

The project is ill-conceived and based on suspect figures.  CSD admit that from an operational viewpoint, it is the worst option.  Security Branch admits prison overcrowding is caused by short-termers and mainland overstayers. We must not spend 14 billion  taxpayer dollars, and despoil for future generations a scenic area to house such people –  they should be handled in other ways.

We need a solution that is quicker, cheaper and more flexible.  This project should be cancelled so we can all have a re-think about this expensive, catastrophic and irreversible blunder.