Tai O  is a good village to explore, on the west coast of Lantau.

Arriving at Tai O (大澳), the village on the west coast of Lantau that has been fancifully dubbed the “Venice of Hong Kong”, we’re expecting to just stroll along through the housing clustered by creeks, then by the mangroves just to the south.

But at the bus stop, there’s a lady standing by a map board showing the route of motor boar rides, encouraging us to go for a trip. It costs just HK$20 for a 25-minute ride, which includes a spot of dolphin watching as well as cruising along creeks past stilt houses.

Well, that sounds like fun – so I hand over the money, we clamber into the boat, by fishing boats with Little Egret watching for small fish, the boat soon fills up, and we’re off, speeding out into the mouth of the Pearl River.

We zip out past houses and, soon, the colonial-era marine police building. And soon, we’re in open water, west of Lantau, but well east of Zhuhai, checking the waters of the Pearl River mouth for Chinese white dolphins.

There are other speedboats out “hunting” dolphins too – this hardly looks the most eco-friendly dolphin watching (though at least fishermen now figure dolphins of some benefit, not perhaps competitors for fish etc). But, despite some bobbing bits of lap sap, no dolphins. Dang, I thought this seemed a bit easy; better join Hong Kong Dolphinwatch if I really want to see the dolphns again.

Still, it’s good to be a little offshore, as there are great views of Lantau, albeit partly lost in smog that’s smothering the Pearl River delta. (Govt has notions of filling much of the area in west of this photo with a container terminal on an artificial island.) 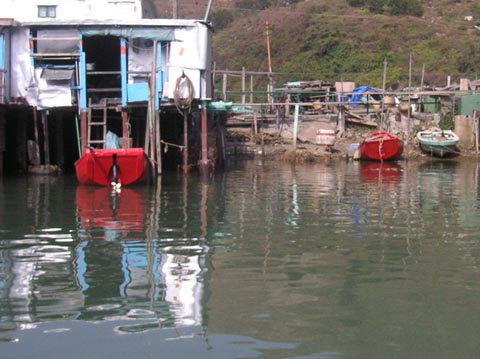 Then, the short cruise along creeks, passing the simple, stilt houses (picturesque but poor, for most part, though there’s strong local character here – but come on, does this really look like Venice?!)

We pass other boats that are likewise taking people sightseeing along the creeks, and return to the quayside. 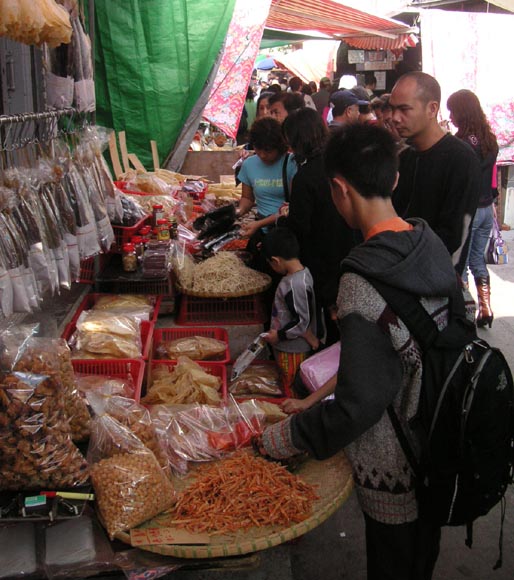 Then, back to being landlubbers, as we stroll along the narrow streets. Especially close to the bus terminus, there are lots of stalls with dried seafood, souvenirs n so on, for the burgeoning tourist trade (many of the tourists here being Hongkongers?).

Very close the the bus terminus, the Tai O Rural Committee has established a museum (free entry, closed Mondays). It’s interesting, with a variety of paraphernalia from Tai O’s past. 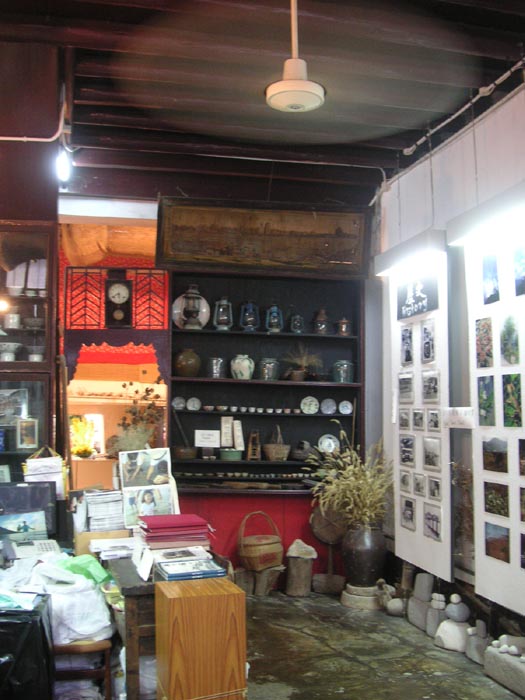 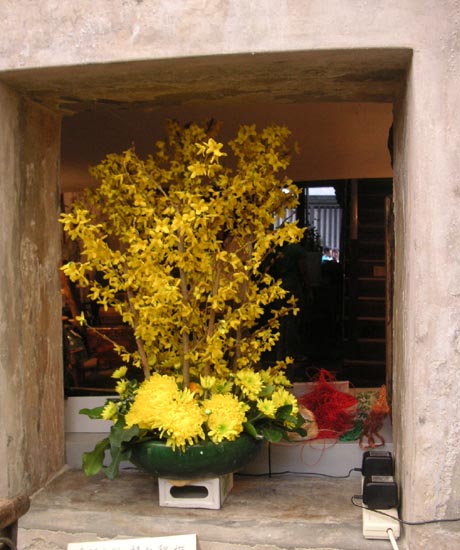 Further along (without crossing the creek) is the small museum founded by local resident Wong Wai-king. For her efforts in founding and running this museum – despite some grief from officials, including over an 8-foot whale bone she has (was said to be illegal, even though from an animal that died naturally) – Wong was among the 108 nominees from the China Region for a 2005 Nobel Peace Prize nomination for 1000 women.

Wong’s museum likely encouraged the rural committee to likewise establish a museum; too bad, perhaps, that not combining their efforts. She has since planned a grander museum, focusing on the old salt fields by Tai O. Sadly, in autumn 2008, her museum – like many Tai O houses – was hard hit by flooding during the storm surge caused by Typhoon Hagupit.

On past the museum. we find a left turning, to winding narrow walkways along beside the stilt houses. 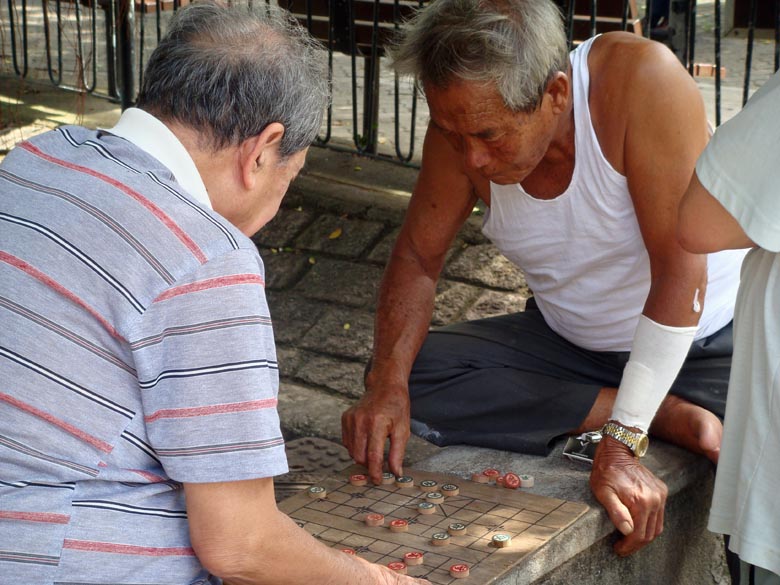 Many houses were destroyed by a fire in 2000. The government came up with plans that would evidently have involved transforming the area, perhaps removing many stilt houses; residents protested, and stilt houses remain, with several rebuilt. The warren of houses makes for some interesting roaming around.

It’s also good to walk along the western shore of the main creek: cross the footbridge near the rural committee’s museum. Turn right after the bridge, and there’s a path that runs roughly parallel to the creek. This first runs through the village, passing the small houses. But eventually, it leaves the houses, to continue to the mouth of the creek, where there is a fine old temple, and a short path to a vantage point looking across the Pearl River, and the flight path of planes bound to/from the Hong Kong International Airport. 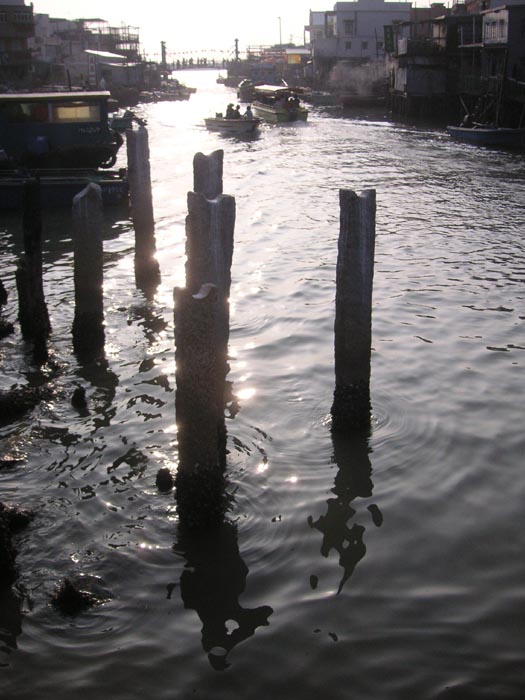 Boat tours motor on by, along the main creek.

Leaving the village – from the bus station, we walk along a promenade that starts at the bus terminus, and along the seaward edge of a lagoon that’s the focus of a mangrove restoration project. There are around 50 little egrets, as well as grey herons; I guess black-faced spoonbills may visit during migrations.

The sun is setting, becoming fainter in the smog, as we walk along the landward side of the mangrove pool.

And then, to catch a bus; glad ours is the 1 to Mui Wo (and a ferry), rather than the far more popular 11 to Tung Chung – don’t fancy that queue! (With many people at Tai O today, just after Chinese New Year, extra buses running – ours left 15 mins early, once all seats filled).

Oh, and if you’re wondering where Shanks’ Pony is – that’s something my mum would mention at times. “We’re going on Shanks’ Pony” – on foot. 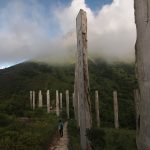