Nature is not simply about protecting plants and animals – it’s also good for the soul, and vital for our society’s long-term well-being.

I was recently watching a documentary on reindeer herders in Siberia. They guided their animals on a long, tough journey through Arctic conditions, spending cold nights outdoors – before eventually arriving at a small town where it turned out they had houses complete with bedrooms, bathrooms, and televisions. The presenter asked why they didn’t just stay in town, and one answered, “To live within four walls would be a prison sentence.” 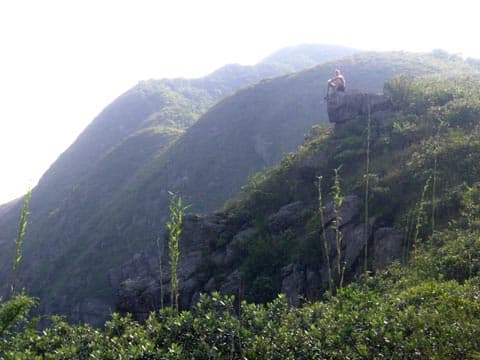 “Aha!” I thought. “That fits my ideas for a Ming Pao Weekly column on our need to experience nature.” Not because I believe all Hongkongers should start herding animals in harsh environments, but because it echoes my view that we all need nature, and life in an utterly urban environment is like life in a prison for the soul.

I write this partly based on my own experience: city concerns seem to evaporate when I’m hiking up steep trails, soaking in scenery, trying to photograph butterflies and birds. But there’s also research showing that natural encounters help both our physical and mental well-being. The importance of the latter was emphasised by a recent survey by organisers of the Mental Health Month campaign, who found more than one-third of Hongkongers suffer from mental illness, perhaps because of the stress of city life.

For this column, I checked online information relating to health and the natural environment. There were of course references to the physical benefits of outdoor exercise like hiking, but I found there’s also evidence that being in nature, or even being amongst and seeing trees, is beneficial in itself. A review of studies assessing health effects of synthetic and natural environments concluded, “Natural environments may have direct and positive impacts on well-being.”

Earlier this year, Canadian researchers reported that people improve their working memory performance by about 16 percent after walking in nature. And in Scotland, a survey found that anything from a stroll in the park to a run through woodland can have a positive effect on people suffering from depression and anxiety. Plus, the positive effect on people’s mental health was 50 per cent more than they might expect from going to the gym.

“That makes sense with what we thought we knew,” said study leader Professor Richard Mitchell of Glasgow University. “That is, the brain likes to be in the natural environment and it reacts to being there by turning down our stress response. Being in areas that have lots of trees and grassy areas help to calm us down.”

Country parks are within easy reach

I know parts of Hong Kong can seem far from anywhere natural. Yet this isn’t really true; it’s easy to reach places like the country parks on Hong Kong Island or just north of Kowloon. So why do Hongkongers pack the city even during leisure time?

There’s something about modern life – the lure of shopping malls, temptations of technology like online games and “chatting”. But also, to too many people, nature is perhaps a little scary: I’ve heard of Hong Kong kids who were afraid to sit on grass, seen teenagers frightened by butterflies. I asked one friend to go hiking, and she said no because, “It’s dirty.”

Dirty! Haha, there might be soil under grass and trees – but think a little when you’re in a gleaming mall: as someone coughs and sneezes, you could soon be breathing in their germs. During the SARs outbreak in 2003, many Hong Kong people thought exactly this; malls became way less popular, and crowds of people headed for the hills and coastlines.

The crowds flocking to country parks discovered what some Hong Kong people already knew: being outdoors here isn’t scary, the city is in an outstanding natural setting, and there’s a lot of things you can do – ranging from gentle walks, through photographing scenery and wildlife, to stream scrambling, kayaking, rock climbing and paragliding.

One legacy of SARS was surely increased participation in outdoor activities. Yet the city retains its lure, and the high rates of mental illness may partly reflect on brains disliking being continually in the concrete jungle.

I hope you’re among the people who regularly enjoy heading to the wilder parts of Hong Kong, and spending time in our few urban parks and green areas fringing the city. If not, perhaps try venturing out, see if there’s an activity that appeals and could become a rewarding long-term. You should find people willing to help you; you’ll meet new friends. And don’t just rely on the group visits, that are sometimes rushed – “Seeing flowers on horseback”; take your own time.

If you go out and enjoy the greener areas, perhaps also become involved in conservation efforts, help persuade planners that we don’t need ever more concrete development. Nature is not simply about protecting plants and animals – it’s also good for the soul, and vital for our society’s long-term well-being.

Version translated to Chinese [see below] appeared in Ming Pao Weekly on 27 October 2012.