The Wong Nai Chung Gap Trail opened around mid-2006, and is Hong Kong’s first battlefield trail (the second being the Pinewood Battery Heritage Trail). It starts just opposite the entrance to Parkview, loops along and down a hillside to pass an old anti-aircraft battery and a couple of pillboxes, then drops to the gap itself, ending at a former bunker complex.

There are boards with info and wartime photos, telling of the brief but intense fighting here, as Japanese forces overran Hong Kong’s defences. The bunker at the end of the trail was hidden by soil and vegetation, but has been recently excavated, helping make this a short but fascinating trail. 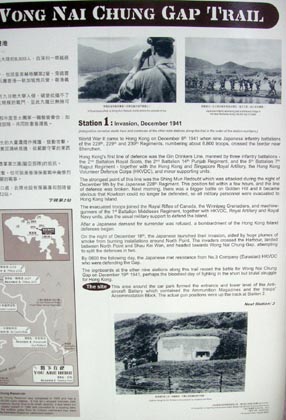 The first of the info boards is right at the start of the trail.

A short distance along the trail, there’s the site of an anti-aircraft battery. Just concrete today, it once held two guns, which shot down a Japanese fighter. A photo shows one of the guns after it was captured by the Japanese.

The trail then follows a cathwater channel, that pretty much hugs the hillside; an info board or two at vantage points tell of the strategic importance of Wong Nai Chung Gap, and of fighting here.

You reach a junction at a spur facing over Happy Valley. There are woods here today, but as war arrived the hillside was almost bare, and two pillboxes were sited here. One is right by the junction, but another is by a side trail, up this flight of steps (it’s visible towards the top right of this photo).

This is the higher and more interesting (I thought) of the two pillboxes; in rather better condition. It’s peaceful today, yet info boards here and at the other pillbox tell of terrible fighting: young guys – some of them volunteers – manning pillboxes; Japanese soldiers swarming up the hillside, some of them dropping grenades down periscope of this pillbox, and being fired at from the one below.

From the junction, the trail drops down, and joins Sir Cecil’s Ride.

The path leads above the Hong Kong Cricket Club, which seems a symbol of relaxed times, yet (before the ground was built – and the valley was partly filled in to create some level ground) this area saw some of the main fighting.

After the cricket ground, there’s chance to walk up a road a little, to Wong Nai Chung Reservoir Park. Maybe for a pedal boat ride, or just for drinks and maybe some food at a cafe with a terrace.

The trail drops to run alongside, and then cross, the main road. Beside a petrol station, there’s an excavated bunker; part of a former complex of bunkers. This was the headquarters of West Brigade; the defenders used machine guns, and the Japanese in turn fired at them with machine guns, as well as making several bayonet charges before capturing the position. A plaque tells of the brigade commander, John Lawson, going out “to fight it out”: he died of machine gun wounds to the thigh, but impressed even the Japanese with his bravery.

(When I walked the trail, I walked downhill from the end station to find a bus stop: bad idea! – had to walk some distance, inc stretches on the road itself. Best, then, to go back uphill a little.)

You can find more information on the battle for Hong Kong – and on the Wong Nai Chung Gap Trail (scroll down to near the bottom) – in The Battle.