I was recently among a small group of people from Living Cheung Chau and the Association for a Beautiful Hong Kong who visited an urban park in north Cheung Chau together with a team from the Leisure and Cultural Services Department (LCSD). Our primary focus was on recently installed railings – as a Living Cheung Chau member believed far more had been added than was really necessary.

During discussions, there was agreement that some of the new railings could indeed be removed. But also, after looking around the park, I remarked that there were very few plant species in the flowerbeds, and there was great scope for improvement. Plus, with more species of plants, the park would be richer in biodiversity, such as through attracting more birds and butterflies.

“Biodiversity” may seem a rather fancy, almost technical term. Yet really it’s simply about numbers of plants and animal species, and abundance of individuals. With its sub-tropical climate and natural habitats ranging from sea, through mangroves and mudflats to rivers, forests and hills, Hong Kong is home to high biodiversity, with over 3000 species of flowering plants, over 300 tree species, more than 230 species of butterflies and just over 500 bird species. 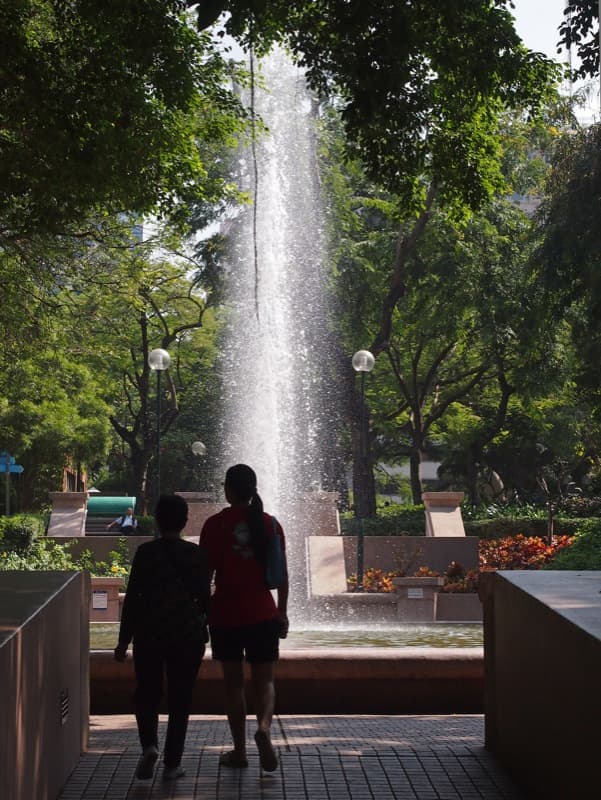 And yet, how much of this biodiversity do you or most Hongkongers really experience on a day-to-day basis? How many birds do you see or hear, how many butterflies and dragonflies do you come across, how many kinds of trees and flowers are in your neighbourhood?

For most people, biodiversity is surely something that is mostly “out there”, someplace beyond where they live and work. Urban parks offer an outstanding opportunity to partly remedy this situation.

Before writing this article, I emailed the LCSD, asking about Hong Kong’s urban parks and biodiversity, and noting some shortcomings. I received a reply from an anonymous spokesperson, pointing out some of the good things being done – like planting over 2.8 million shrubs/trees last year, and using the “right species for the right place” to select plants. But the email gave no solid information on animal species found in our parks, and ignored issues such as my comment that perhaps dead leaves are often swept from soil for the sake of cleanliness.

On the LCSD website, there is a section about a Green Hong Kong Campaign. Looking through it, I get the impression that there is official confusion, as though the concept of “green” begins and ends with adding the colour green: grow plants that make an area look green, and that will suffice, job done. There are photos with ornamental plants, but scant information on biodiversity. A section on birds covers a mere 21 species – just four percent of Hong Kong’s total.

Compare information on New York’s Central Park, which notes that over 230 bird species may be found there, which is around half the total for New York State. This impressive tally is partly a result of the park having a range of habitats, including some areas that were created by people, but have been allowed to develop like wild woodland.

According to the anonymous spokesperson, Hong Kong’s urban parks now have 35 “conservation corners”, and vegetation clearance is kept to a minimum, to preserve wildlife habitats. But picture a typical urban park, and I expect you picture a place with concrete paths between closely cropped lawns, lines of trees, and neatly manicured flowerbeds. There isn’t much space for any wildness.

So, what would I suggest? Mainly, I think, that the LCSD management consider whether having more biodiversity in our parks would indeed be worthwhile and – if so – have the courage to implement policies that can realise this goal. This would involve seeking advice of experts outside the department, and outside government; and allowing areas of some parks to become wilder.

Benefits would include parks becoming home to far more of Hong Kong’s plants and animals. This could help with conservation of some species, but will also make the parks more enjoyable to visit: even people with no expert knowledge of birds, butterflies and beautiful plants enjoy seeing and photographing them.

More biodiversity will involve areas perhaps looking messier to some people’s eyes. But education will be needed, too, such as explaining that dead leaves on soil are not “dirty”: they quickly decay to become food for plants. More education will be possible, as city parks bring people and wildlife closer together.

It is not just the LCSD that can become involved in such efforts. So too might the Civil Engineering and Development Department, which is currently implementing a Greening Master Plan; and the Lands Department, such as with the slopes it manages.

Such initiatives would dovetail with the Environment and Nature Bureau’s current efforts to develop a Biodiversity Strategy and Action Plan. By making the city home to more of our native plants and animals, it would bring us just a little closer to living in harmony with nature. With wildlife as neighbours, we might have more chance of achieving real sustainable development.

Written for Ming Pao Weekly; published [in Chinese] during April 2013