During the Covid pandemic, many people have spent longer indoors than is really good for mental or physical health; we need a more balanced way of life, including exercise and relaxation with some escape from the pressures of the Covid-19 era.

With evidence suggesting most coronavirus transmission occurs indoors, there is surely wisdom in heading outside. Add the fact that most people are wearing masks nowadays, and you can mostly keep at least a cough’s distance from others, and even a city park can be a good place to visit.

Look at a map of Kowloon, and it appears peppered with green space, yet checking more closely it turns out that little of this is suitable for strolling around, with several parks dominated by soccer pitches and other sports facilities. But there are some parks – and even a nunnery plus landscaped garden – that are well worth visiting.

Perhaps the best of these is Kowloon Park, near the southern tip of the Kowloon Peninsula. In 1864 – four years after the peninsula was ceded to Britain – the site was designated for military use, and the following decades saw the development of barracks along with a battery to help guard Victoria Harbour. The British military relinquished the barracks in 1967, and in 1970 the site was redeveloped to become Kowloon Park, though this was only completed in the late 1980s.

Now, it’s an attractive park, abounding with footpaths and sections such as Conservation Corner and Kung Fu Court, and offers welcome respite from the streets of Tsim Sha Tsui. You might start a visit there at a southern entrance, along Haiphong Road, and take a path on the left, to an artificial pool shaded by trees, with a fountain pumping a column of water to almost treetop height. The Conservation Corner is nearby, by the eastern edge of the park, which borders Nathan Road.

While the idea of nurturing a relatively natural environment here was good, and in the 1990s this corner and nearby attracted a variety of migratory songbirds, it seems park managers have lately ripped away some of the vegetation, perhaps to reduce numbers of mosquitoes. Add pesticide spraying, and there is “conservation” in name only nowadays, so you might struggle to find even the commonest local birds here. Still, a shelter amongst the trees can be a quiet place to visit, and perhaps sit a while.

Steps up from the [Former Conservation] Corner lead to the Kung Fu Court, which is a concrete area dotted with quirky statues, and is a popular place for morning tai chi. Continuing northwards past here, there’s a tiny maze, and beyond this the Chinese Garden, which has outdoor corridors and an ornamental pond with pavilion in traditional Chinese style.

Westwards lies an artificial pool – the Bird Lake. While tiny for a “lake”, this is a pleasant spot to visit, and enjoy seeing a captive flock of bright pink flamingoes against a backdrop of trees and bamboo. Wild black-crowned night-herons have also found the Bird Lake offers a haven in the city, and established a colony with a few tens of nests in trees above the footpath.

Uphill a little from here, a path leads past an aviary, to a playground incorporating remnants of the military battery. Tucked away in the northwest corner of the park, a fitness trail winds down a wooded slope, and makes for a pleasant stroll. To exit the park, you might pass a nearby outdoor swimming pool, and emerge onto Austin Road.

In Diamond Hill on the northern fringe of Kowloon, the Chi Lin Nunnery could be a place to head if you’re in need of a little tranquillity. Though the nunnery was established in 1936, the present buildings date from 1990, and were built entirely from cypress wood, with no nails used. Even 30 years later, they still appear brand new.

There’s a grand temple complex, with halls housing Buddhist statues, a courtyard featuring ornamental trees and rectangular pools where water flows in through carved dragons’ heads. While the architecture is impressive, the dark brown buildings lack the colour and vibrance of many a temple. But there are brighter structures nearby.

Across a footbridge, there is the related Nan Liang Garden, with features including a red bridge to a golden pagoda on an island in an artificial lake. You can walk paths here, passing trees resembling cypress, and artificial landscaping that slightly recalls the kinds of mountain areas you see in Chinese paintings. It’s an odd garden for sub-tropical Hong Kong, superficially pretty and utterly phoney. So, there’s no need to stay too long.

Back in the 1980s, Kowloon Walled City was an infamous place, a no-go area for most people, outside British rule yet not really in China. Articles and photos portrayed a warren of dingy narrow alleys between apartment blocks, where prostitutes and drug dealers plied their trades, tiny factories produced fish balls of dubious quality. In 1987, the British and Chinese governments announced plans to demolish the buildings. The demolition began in 1993, and was completed in April 1994. The next month, work began on transforming the site into Kowloon Walled City Park.

Today, this is a green and pleasant place, with a surrounding wall and entry gates, outdoor corridors, ponds and shrubberies, built and arrayed in traditional Chinese style – a little similar to Kowloon Park’s Chinese Garden, but grander and more attractive.

In the centre, there’s a building like an old south China temple. This is the Yamen – the only surviving original building, which was the headquarters of the Walled City when it was built as a fortress at the end of the Qing dynasty, around 1847. It’s now the park office, and hosts a modest exhibition on the Walled City’s history.

Another park building is called the Mountain View Pavilion, but trees hide most of the surroundings, and the Kowloon Hills to the north. For a hilltop with a view, you have to head to another, nearby park.

From near the western edge of Kowloon Walled City Park, a short walk along Dumbarton Road leads to Kowloon Tsai Park. Here, you can follow a footpath north past a lawn and Bauhinia Garden, and skirt round past two schools, to arrive in Lok Fu Park.

This is an unusual urban park, on the east flank of a small hill, and offers an opportunity for simple hiking within the city. Footpaths with flights of steps lead upwards, meeting a narrow road that arrives at the gate to Lok Fu Service Reservoir Rest Area, which is a flat, grassy expanse atop the hill, perhaps ideal if you want a picnic spot high in Kowloon.

This is also a splendid vantage for admiring Kowloon and surroundings, from Lion Rock south to the harbour, and Kai Tak. If you ever landed at Kai Tak Airport, before 6 July 1998, you might recognise this hill. It was known as Checkerboard Hill, after a giant red and white checkerboard painted on the concreted southwest slope – which once helped indicate to pilots on final approach, that they had to turn sharp right, then drop down till almost level with rooftops, before touching down on the runway in the sea. 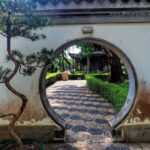 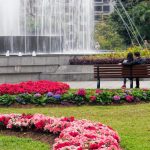 Published or Last Updated on 25 October 2022