Buses abound in Hong Kong, with even small villages served by regular minibuses. 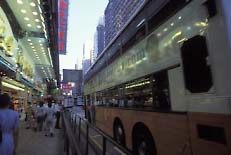 Stand by a main street in downtown Hong Kong and, chances are, there’s a bus passing (see below for minibuses info). Or maybe a succession of buses, perhaps jammed nose to tail in traffic held up by lights, or whooshing on past if the way ahead is clear.

As this suggests, buses abound in Hong Kong, particularly in the city. Bus routes abound too – and unless you’re in the know, it can be confusing figuring just where the heck all these buses are going: especially when they’re showing a final destination that many a local may hardly know, let alone tourists or expats who don’t know the city well.

Happily, the situation’s less complicated when it comes to buses serving destinations outside the city. There isn’t such a plethora of routes; and there are just four bus companies to be concerned with.

Those companies are: Citybus and New World First Bus Services, which mainly operate services on or originating on Hong Kong Island; Kowloon Motor Bus Company (KMB) – which besides covering Kowloon also operates routes serving much of the New Territories; and New Lantao Bus – which is no longer “new” (it was established in 1973) and even retains a rather archaic spelling of the place it serves, Lantau.

There are also plenty of minibuses, which come in two varieties: green-striped, and red-striped, and are also called public light buses or maxicabs. They’re rather more expensive than buses, but not by a gross margin, and while they may serve the same or similar routes, it’s minibuses that reach to the smaller villages communities – even some tiny villages have surprisingly frequent services.

Though the green minibuses operate fixed routes at fixed fares, and red minibuses operate pretty much wherever they wish, without set fares (though fares are indicated as you get on – rather than drivers charging by how you look!), in practice it’s similar catching either. You might find a minibus at a regular stop, or flag one down as it barrels along a road beside you.

Pay as you board (or, occasionally as you exit; in most minibuses you’ll find an Octopus device), and sit till your intended stop approaches – then pipe up saying you want to get off: if you wish, try yelling “Yiu lok, mgoi!” – “I want to get down, please!”

The Moovit app seems worth getting for smartphones.