A narrow road leads up the Kowloon Hills, passing close by Kowloon Peak. 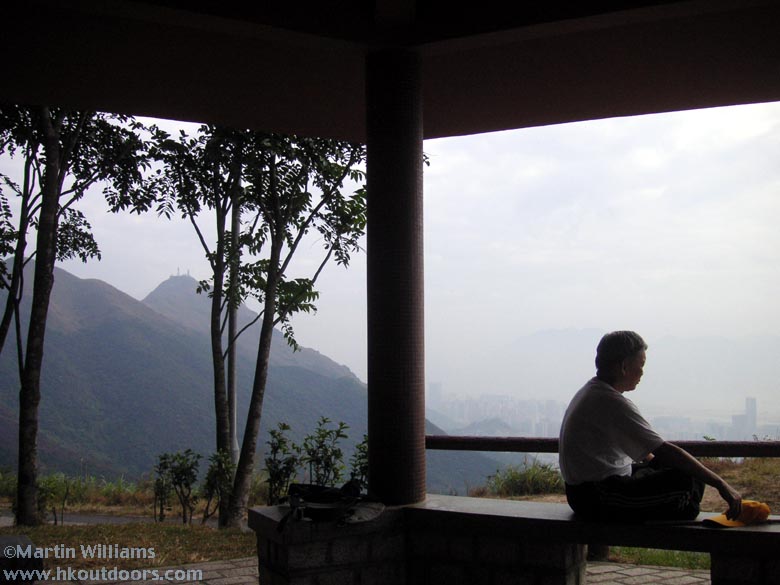 As well as several trails up the Kowloon Hills, there are narrow roads to the eastern part of the ridge, with one passing close by Kowloon Peak. I headed up one of these, by taxi from Wong Tai Sin MTR station. Took a bit of explaining to the taxi driver – even using a map, and mentioning locations such as Sha Tin Pass, but eventually made it onto the right road, leading uphill from behind Wong Tai Sin Temple.

The narrow, one-way road winds up the steep slope, passing Kwun Yam Temple, which is set on a wooded hillside overlooking Kowloon, and to Sha Tin Pass. From a junction here, there’s a road on up along the crest of the ridge.

This is a narrow road – better suited for hikers than cars – it’s part of the Maclehose Trail, though happily it’s perhaps rather little used by vehicles. There’s another junction, with Jat’s Incline dropping away down to northeast Kowloon, and a road coming down the ridge (one-way only) from near Kowloon Peak. If you arrive here with plans to go higher, you’ve got to get out and walk. The views are impressive; there’s a small pavilion with Kowloon Peak ahead, Kowloon below. 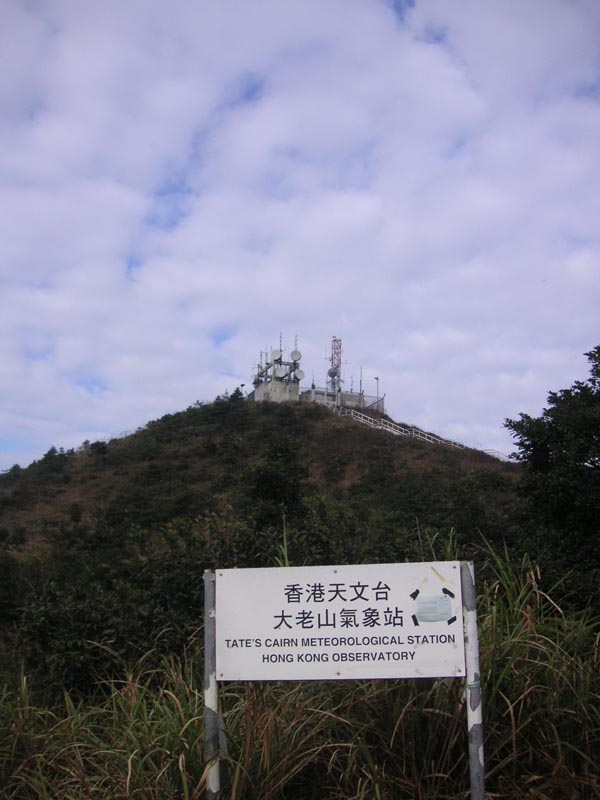 Walk up the road, and you’ll soon pass the hilltop known as Tate’s Cairn, where the 577-metre summit is topped by a weather station. Close by the road is a slightly lower but accessible hilltop, with cracking views eastwards to Ma On Shan, south along a ridge to Kowloon Peak and over Kowloon, west along the Kowloon Hills, and with Tai Mo Shan to the northeast. 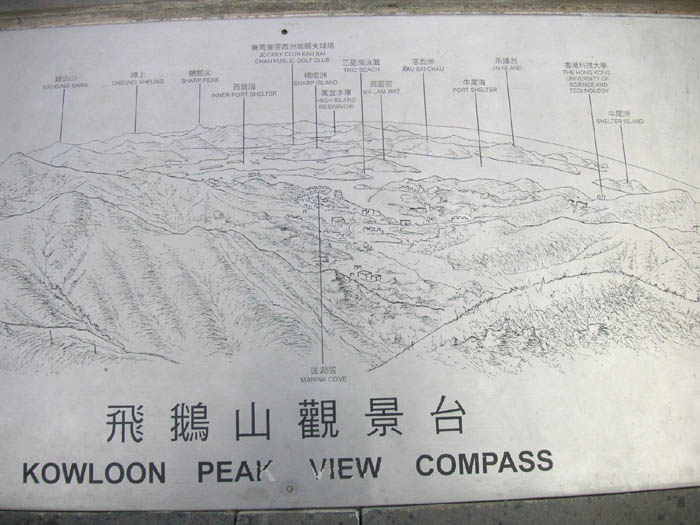 The road winds on, and angles left before dropping down from the Kowloon Hills. At the curve, there’s another pavilion, and above this a short flight of steps to a vantage with seats and two “view compasses” – looking west across the Sai Kung area, and east across Kowloon. Both signs show features you’d need clear, smog-free weather to see – like Green Island in Victoria Harbour, and beyond.. 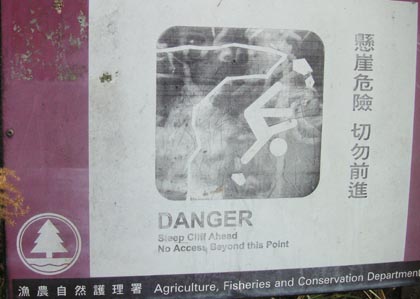 There’s a narrow, rather faint footpath leading south from the pavilion, towards Kowloon Peak. This sign warns that you shouldn’t walk along here, as there are dangerous cliffs (on southern slopes of Kowloon Peak; care is indeed needed as some people have died in falls here). 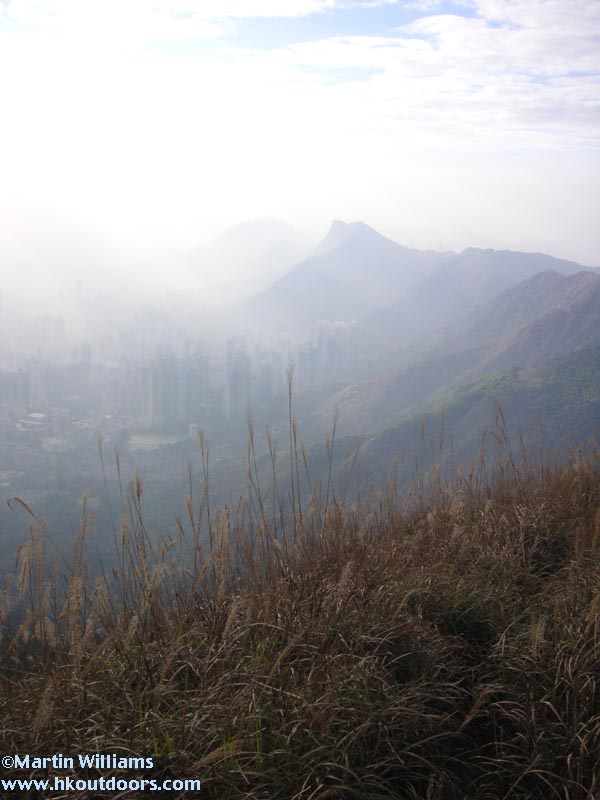 You don’t have to walk as far as Kowloon Peak itself to enjoy views from this ridge. Climb the first, rather steep slope up this ridge (after passing under a big electricity pylon), and you can look along the Kowloon Hills to the west – Lion Rock is the highest of the peaks, though from here doesn’t have the resting lion profile. 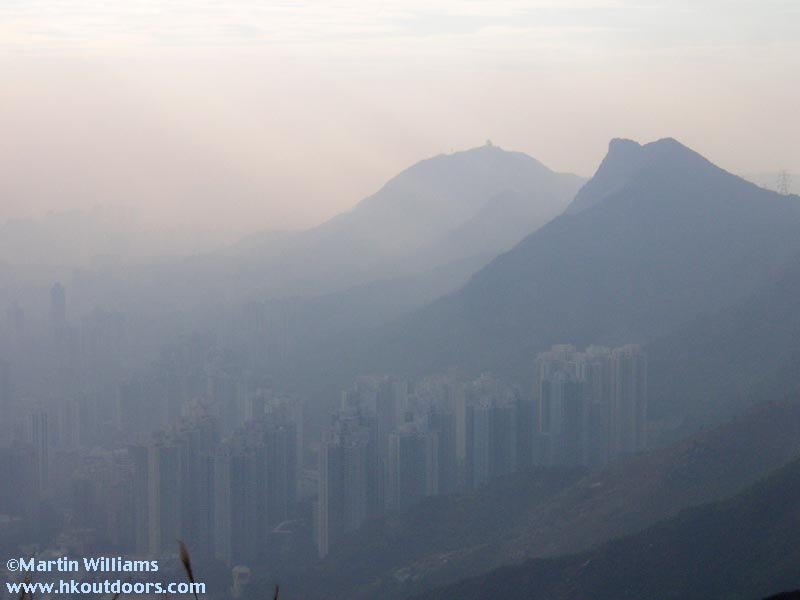 Kowloon is at the base of the hills, and on the day I went the city was veiled in smog, with slanting shafts of late afternoon sunlight. 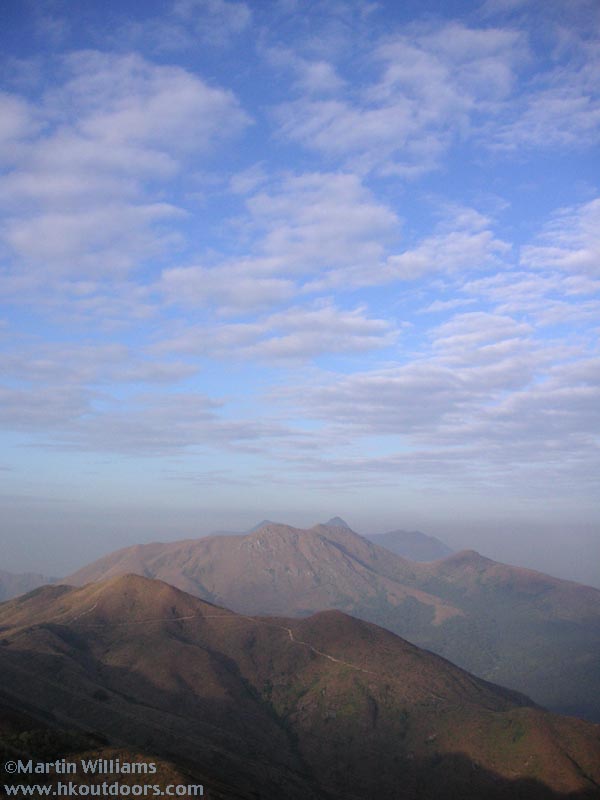 East from the ridge are more hills; here, Buffalo Hill dominates the landscape, with Ma On Shan just visible beyond. 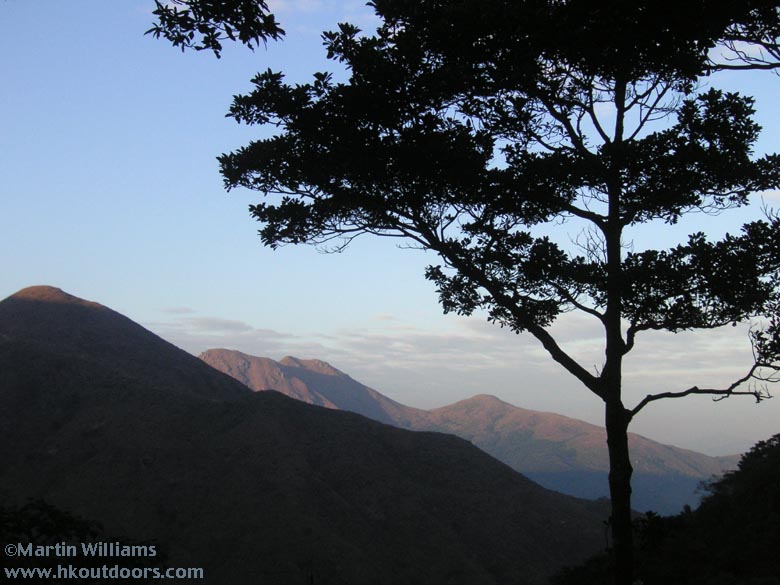 If you’ve travelled up by taxi, you’ll have to either call a cab (not easy I think) or walk down to the city below. One way continues on the road past Kowloon Peak, then down to Fei Ngo Shan [Kowloon Peak; but here meaning area with housing]. This passes through woodland; there’s a pavilion with some views, including towards Buffalo Hill (left of centre in this shot).

At Fei Ngo Shan, with its low-rise, mostly upscale apartment buildings, you might find a taxi, and head to an MTR station such as Choi Hung (or Hang Hau maybe better if you’re heading for Hong Kong Island). Or walk on down, to Clearwater Bay Road, and catch a minibus to Choi Hung.