Here are comments on the Concept Plan for Lantau (or “Concrete Plan for Lantau”?), which I have submitted to the Lantau Development Task Force. (Didn’t include this image.) [February 2005] 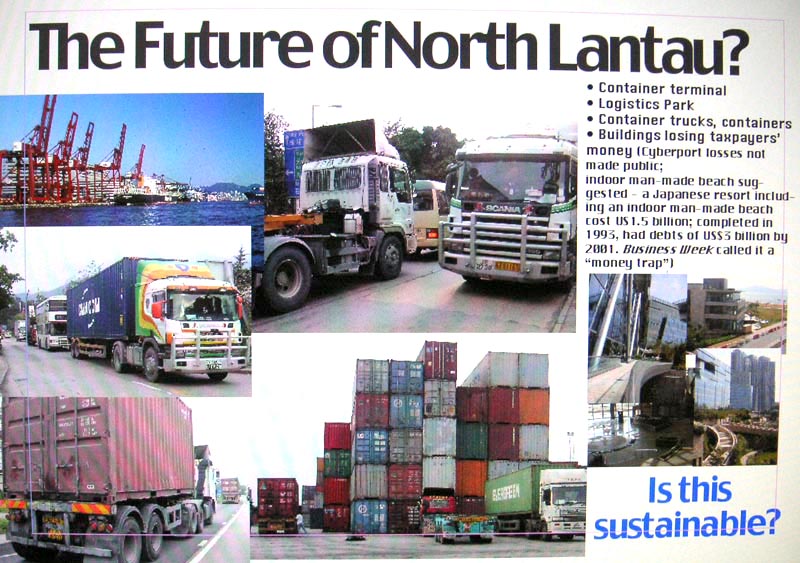 Comments on the Concept Plan for Lantau: Consultation Digest

The Concept Plan (CP) gives no justification for focusing solely on development of Lantau Island. This is surely a major omission.
A true “sustainable development” plan would include broader issues, spanning Hong Kong as well as neighbouring areas.

– Given that several projects are large-scale, with major implications for Lantau and Hong Kong, the consultation digest is remarkably flimsy.
– The consultation period is inadequate: just three months, spanning three major public holidays.
– Information disseminated to the public is likewise inadequate; most people surely remain unaware of the scope of the “plan”, and planned projects.
– It appears the public consultation was never envisaged as a serious discussion that could really change the “plan” – indeed, the “plan” begins by saying, “the proposals would be reviewed and fine-tuned [my emphasis], taking into account the views of the community.”

– The “plan” has serious omissions – most notably, the proposed container terminal, which may be built on an island to be created off the northwest coast of Lantau. Reasons for not including such schemes seem weak; arguments given apply also to several of the projects within the plan.
– Consultations including the container terminal also finish on 28 February (as per the Concept Plan): is this really just coincidence?

Neither a concept, nor a plan

– The “Concept Plan” is neither a concept nor a plan. It appears planning is well advanced for several of the projects – ie they are not merely conceptual. Instead of being a plan, this is a hotchpotch of assorted projects, with little regard to how they might combine.
– As evidence of this not being a plan: no overarching environmental assessment will be conducted.
Not balanced
The plan asserts that the aim is “to balance development and conservation needs”. This is clearly nonsense:
The plan calls for significant environmental destruction – including on land and destruction of shallow coastal areas. Yet no creation of habitats is planned in mitigation.

– The plan asserts that it is “in accordance with sustainable development needs”. No justifications are given for this; instead, the evidence is to the contrary.
– As mentioned above, the plan includes projects that will cause major destruction to expanses of land and sea; yet without creation of habitats in mitigation. Projects such as the road bridge from Zhuhai and the logistics centre will inevitably lead to increased air pollution along a coastline that already suffers from severe smog: no mitigation is proposed, and the “plan” utterly fails to answer questions such as: “What is a sustainable level of smog for Tung Chung?”
– The Hong Kong Government’s definition of sustainable development places strong emphasis on “future generations”. Yet future generations are not mentioned in the plan; nor is there an indication of what is “sustainable” for their health and other needs (such as quality of life).
– Instead, the plan seems to equate “sustainable development” with “development”. The tough issues surrounding what “sustainable” actually means are simply omitted or glossed over.

Hong Kong was known as a place thriving on laissez-faire principles. Though this is not fully true, the Hong Kong Government to a fair extent facilitated development, and businessmen got on with doing business. This “concept plan” seems to arise from a different philosophy, with government conceiving projects large and small.

For all that it is a hotchpotch collection, the “Concept Plan” gives the Hong Kong public no real choices. No alternative overall approaches to developing Lantau are given; there are no alternatives for the specific projects.

The “concept plan” gives no indication that members of the Lantau Development Task Force have a thorough knowledge of Lantau. Indeed, it appears that projects have been sited according to what seem convenient locations on maps. Omissions concerning, for instance, tourism, indicate a worrisome lack of appreciation of Lantau’s existing character and appeal.

Yes, there are existing and ongoing developments on Lantau.
However, Lantau remains a special island, for aspects including ecology, culture, and scenery – and as a place for people to live and visit for recreation: special within Hong Kong, within the Pearl River, and special within Greater China.
The plan makes some reference to this special nature, yet places massive emphasis on concrete-based development projects, which will change Lantau forever.

Hong Kong – Zhuhai – Macau Bridge (HKZM Bridge)
It appears the “concept plan” takes the HKZM Bridge as a given, accepting that this will be road only.
This is deeply troubling, for a plan boasting that it focuses on “sustainable development”.
– Why is the bridge not discussed, together with its environmental implications?
– Why are alternatives not covered? Should the bridge be rail-only? Is there really a need for the bridge to land on Lantau – and if not, what then for the rest of the “concept plan”?
– Plainly, given the bridge is currently planned to carry substantial container traffic, it will have major adverse impact on Lantau’s air quality. Were the “concept plan” to live up to its claims to aim for balanced development, the plan would call for the bridge to be scrapped, or rail-only, or might propose highly innovative mitigation measures.

Why must this be in Hong Kong?
If the bridge must be built, why not ensure this is rail-only, and build park and ride facilities at terminuses in Zhuhai and elsewhere? Were such options even considered?

This is one of the main projects in the “plan” – with a special working group to take it forward “as soon as possible”, yet only a trivial amount of information is given for the “consultation” process.
– What are the justifications for this park?
The logistics park will replicate several of the operations that are already conducted at the airport, and the container port. Are the airport and the container port performing very badly? – if so, this has not been made public; indeed, the container port is among the world’s busiest.
– Who are the driving forces behind this logistics park?
– Does this logistics park really make economic sense?
This logistics park will be expensive to build, requiring a major reclamation – five times West Kowloon cultural district! – and will result in significant air pollution.
– The logistics park seems, on current evidence, to be just a grandiose concreting scheme, which might seem a good idea to a very few people, yet could become an economic white elephant to eclipse even Cyberport.

A motor racing circuit has been suggested, and might be built on land created by destroying yet more of Lantau’s coast. This seems a crazy idea – making no apparent economic sense, and diametrically opposed to principles of sustainable development.

The government earlier planned a “tourist paradise” for northeast Lantau. Read tourist brochures from around the world, and nowhere will you find a “tourist paradise” that includes a logistics centre bursting with container traffic, a transport interchange, and a building complex dubbed a “node”.
– Why build such a “node”, here or anywhere? Is this designed to siphon income from existing businesses in Tsim Sha Tsui and elsewhere – and/or to ensure that visitors never even venture to such places?
– Why does the government believe it can create successful tourism infrastructure – especially when it will compete with existing facilities?
– How can a “plan” espousing “sustainable development” even contemplate an “indoor man made beach”?

Disneyland is not yet open; has not proven a success, and especially has not provided evidence it can ensure long-term success that truly justifies the expenditure by Hong Kong in terms of land, money, and environmental damage. Until such time as Disnelyand does (perhaps) prove a long-term success, building a second theme park anywhere in Hong Kong is premature – especially given such parks can be hit or miss ventures; mainland China has plenty of theme parks that have failed (even if an initial burst of interest). Theme park construction is surely not government’s job.

Have task force members walked around or even seen the area where an “upland golf course” is planned? It has steep hills, very different to the pretty pictures in the plan.
Why devastate a “secluded location overlooking the Lantau Link and Kap Shui Mun Channel” in order to create a golf course?

Resorts “compatible with the natural environment” are proposed. However, no consideration is given to their impact on the natural environment – they will decrease the very beauty that led to them being sited in the first place – and on whether alternatives are possible that might protect the environment whilst bringing more, long-term income for residents (which would be “sustainable” in a true sense).
It appears the resort planners are oblivious to the local climate. In winter, Hong Kong can be cool, and most of the time it is too cool to swim. In summer, Hong Kong is invariably hot and humid – too hot to enjoy outdoors locations for great lengths of time; added to which, there are spells of intense rainstorms. Added to which, the southwest monsoon of early summer can cause rough seas along Lantau’s south coast.
Given these climatic factors, Lantau’s beaches are better suited to visitors who spend only part of a day there, with ready access to other places (such as in the city): ie better suiting day-trippers.

These are smaller projects, not always wise but at least less devastating in scope, so briefly here:
– Museum of Lantau and Eco-Tour Centre Maybe a good idea; though would be ironic having eco-tour centre if much of north Lantau is destroyed – eco-tourists aren’t idiots, and dislike massive over-developments, and air pollution etc. (You cannot simply parcel land into places where you have development here, eco-tourism there, and hope people won’t notice.)
– Facelift of Mui Wo Could be good idea; Mui Wo is not nice near the ferry pier. There’s also a plan from Lantau residents. Resist concrete; Mui Wo could be a superb “green” gateway to Lantau for residents and visitors arriving by ferry, and a better place to live.
– Heritage trail and cycle track Seems a good idea for Mui Wo.
– Preservation of Tai O Yes, but with care that not a lot more housing – especially lookalike, characterless Spanish style “villas”. Kept well, and promoted, Tai O surely has potential to attract increased numbers of tourists.
– Cycle track Ostensibly a good idea, but avoid significant environmental destruction to create it. Could, say, use the catchwater road.
– Watersports centres and boardwalks Hmm, not sure about these centres. Low impact watersports, maybe.
Boardwalks seem ridiculous – why spoil a lovely stretch of foreshore? This is a wonderful beach for strolling along the sand, not in need of much “development” other than some promotion.

The plan is weak and feeble here; regurgitates information on existing protection, suggests a little more protection, yet there are no plans for habitat creation or improvement – nothing whatsoever to “balance” all the destruction the plan aims to wreak on Lantau.
A marine park is proposed for southwest Lantau, apparently oblivious to the fact there’s a proposal for building a container terminal on an artificial island just north of this – and the reclamation work for this, especially, will have a massive impact on the “park”.
No mention is made of proposed marine park for the Sokos.

Overall, then, the “concept plan” is ill-considered, and the consultation digest is threadbare. Far more consultations and meaningful discussions are clearly needed if a plan is to be devised that will ensure economic development that is truly sustainable: development that can benefit Hong Kong people today, as well as future generations, whilst ensuring we keep Lantau beautiful.