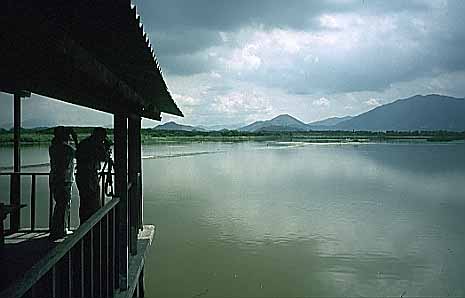 Mai Po Marshes Nature Reserve, which is managed by the World Wide Fund for Nature Hong Kong, is a key part of the internationally important Deep Bay wetland, which is listed as a Ramsar site, and lies between northwest HK and Shenzhen.

While gulls are scarce in much of Hong Kong, they abound on the Deep Bay mudflats in winter, with the best period perhaps in late February: most are Common Black-headed Gulls, there are also Heuglin’s Gulls (akin to Lesser Black-backed Gulls), Black-tailed Gulls, and locally scarce gulls such as Glaucous-winged and Great Black-headed (Pallas’s, if you prefer).

Herons and egrets are especially obvious in winter – with Grey Herons and Chinese Pond Herons plentiful, fewer Purple Herons in the marshes, plenty of Great and Little egrets, also Cattle and Intermediate egrets. Great Cormorants are also abundant in winter.

Wintering shorebirds are less diverse than during migration, but – if the tide is right – it’s possible to see several thousand on the Deep Bay mudflats, especially Pied Avocet, Kentish and Grey plovers, Dunlin, Eurasian Curlew, with a fair chance of others such as Great Knot, Lesser Sandplover – and perhaps even one or two Nordmann’s Greenshank. (Lately, thanks partly to the mudflat level rising, coupled with quirky tides in winter [when main high tide tends to be at night], conditions for viewing winter shorebirds have generally been poor.)

There are world rarities, most notably one of east Asia’s star birds, Black-faced Spoonbill, of which there are around 1700 known in all, and for which Deep Bay is one of only three major winter sites. It seems most pass through on migration, especially in November, but over a hundred may be found throughout winter. They feed along the mudflats, also at ponds within the Deep Bay area, and tend to roost at ponds in Mai Po (typically from around 10am to late afternoon).

Other endangered wetland species that are/were annual here are Dalmatian Pelican (arrive perhaps end of December) and Saunders’ Gull. Both may be seen on the mudflats, from the Boardwalk hides. Sadly, the pelicans maybe even rarer now – staying further north as the world warms? – and Saunders’ Gull numbers declining, maybe as pollution killing the crabs they feed on.

Spotted and Imperial eagles are among the birds of prey that spend winter in the area – others include Eastern Marsh-Harrier, and there’s a chance of Bonelli’s Eagle and White-bellied Sea-Eagle. Songbirds include Olive-backed Pipit, White-cheeked and Red-billed (Silky) starlings, as well as Styan’s Grasshopper Warblers – though the latter are darn tough to see (hah! – I’ve never seen one, anyway). 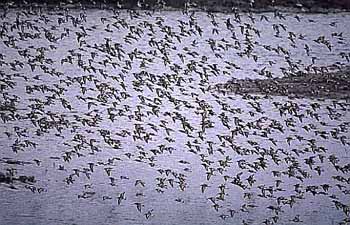 Spot the Spoon-billed Sand! (there was one amongst these – mostly Curlew Sandpipers)

Autumn and spring, especially, bring a host of migratory shorebirds.

The commoner species include Curlew and Terek Sandpipers, Red-necked and Long-toed stints, Lesser and Greater sandplovers and Red and Great knot; there are also globally rare Asian Dowitcher, Spoon-billed Sandpiper and Nordmann’s Greenshank. The shorebird migration starts in late March, continuing to around the middle of May; around mid-April is perhaps best: Grey-tailed Tatler is among the later spring shorebirds that starts passing through around this time.

Gull-billed and Caspian terns mingle with the migrant shorebird flocks – both on the mudflats, and on Mai Po lagoons when the mudflats are covered at high tide, and large roosts may assemble on these lagoons. Whiskered and White-winged terns also occur, especially in late spring, favouring fish ponds just south of the reserve.

Chinese Egret is another spring migrant, mostly from around mid-April, and perhaps most likely in easterly winds (apparently, drifting birds westward, as they migrate north from wintering grounds in the Philippines; easterlies can also be good for Grey-faced Buzzards early in spring, Chinese Goshawks from mid-April to early May).

There are other migrants, too – Little Swifts and Barn Swallows may occur in thousands, with fewer Pacific Swifts, White-throated Needletails, Asian House Martins, Sand Martins (best in spring when it’s overcast/rainy); there are songbirds such as Narcissus and other flycatchers, Oriental and Black-browed reed-warblers, and Yellow-breasted, Little and scarce Japanese Yellow buntings. For these and most other migrants, numbers are usually best when there’s adverse weather for migration, such as when cold fronts arrive and/or there’s rain (spring thunderstorms, perhaps).

At all seasons, Mai Po is home to kingfishers, and if you are really lucky you could see four species in a day here – Black-capped, White-breasted, Common and Pied; maybe best in autumn and winter. Other residents include Long-tailed Shrike, Japanese White-eye, and Plain and Yellow-bellied prinias.

If you’re coming from overseas, it is possible to head to Mai Po and obtain a day permit from the WWF Hong Kong shop there, for HK$120. For info, you could email Mai Po.

For transport info, you may find this page on Hong Kong Outdoors useful. (You could take East Rail to Sheung Shui, or West Rail to Kam Sheung Road, then a taxi; once you’re ready to leave the reserve, ask someone there to help you phone for a taxi – or walk out along the road through fishponds just outside the reserve, to junction with a road with passing taxis and minibuses.)

Or, if you want help with finding birds, I may be able to escort you, or find another birder who can. Please email me, or perhaps first check info on Hong Kong Ecotours.
See forum thread here, Comments on Mai Po bird tours.

Birding elsewhere in Hong Kong (link to another article on this site; see also the photo gallery, esp for shots by Neil Fifer).