Pedro Blanco finds itself at the centre of some of the most intense and destructive fishing pressure within the South China Sea.

Eighty-five kilometres due east of Sai Kung in mainland Chinese waters lies an isolated rock pinnacle swept by deep oceanic currents and covered in colourful marine life. The rock finds itself at the centre of some of the most intense and destructive fishing pressure within the South China Sea.

During periods of calm weather when fishing is more favourable Chinese fishermen hurl packets of dynamite at the rock or drop pillow-sized bombs onto some of the deeper pinnacles. Gill nets ring the islands, lines of hooks crisscross the rocky bottom and underwater spearfishers by the boatload come from Hong Kong dressed in camouflage wetsuits and fire upon anything that moves.

All this is particularly alarming considering the rock is only 200 metres in circumference.

Pedro Blanco, (a variant Iberian translation of White Stone or Big Needle in Chinese) is a magnetic food source for numerous pelagic fish species and a seasonal nesting home for hundreds of migratory Bridled Terns and Black Naped Terns. When the plankton blooms are in force Whale sharks are also occasionally seen feeding close to the rock, gorging on this rich marine soup.

Besides being home to bait fish and coral associated fishes, other marine life regularly encountered include morays, snappers, little tuna, barracuda, mackerels, reef rays, octopus, frogfish, turtles and if you are very lucky a marlin or manta may cruise past. Andy Cornish, a marine biologist based at the Swire Institute of Marine Science in Hong Kong said that when he first dived at the pinnacle in 1999 it had some of the richest fish life he had seen anywhere, “As well as having far more large reef and open-water fishes than reefs in Hong Kong, it is bathed in a current that passes the Philippines and had all sorts of tropical fishes never recorded from Hong Kong waters.”

Charlie Frew, a marine specialist with Asiatic Marine has had some incredible encounters with marine life Pedro Blanco that are hard to find in other parts of the world. Close up encounters with Blue Marlin, Mantas and Whale sharks have been the highlight of his 7 years diving at Pedro Blanco. He eagerly awaits the appearance of a large predatory shark to complete the record. 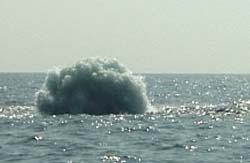 Historically, Pedro Blanco’s marine life was largely protected by its isolation but in recent years increasing numbers of boats from Hong Kong and the mainland have made the trip as the fish populations are so much healthier there, or were. The intensive recreational fishing and spearfishing by enthusiasts from Hong Kong, and blast fishing (fishing with explosives) is taking its toll and fish populations are in serious decline with large fishes in particular getting much scarcer.

Its hardly surprising says Dr. Cornish, the outcrop is tiny but he’s seen dive boats from Hong Kong transport up to 40 spearfishers in one day to the site. It’s underwater carnage he says with each diver taking as many fishes as they can and showing no restraint. “It’s extremely irresponsible of these dive operators, not just because it ruins the experience for other divers but as it is completely unsustainable and will even kill their own business in the long-term.”

The blast fishing is also getting worse and becoming more frequent. Charlie said “Just last week 2 boats had been blast fishing just before we arrived. Large fishes could be seen lying on the sea floor and hundreds of little reef and baitfishes were floating on the surface, drifting with the current.”

Some dramatic footage captured by Charlie Frew clearly shows the size and impact of the blasts. Huge underwater rocks are cracked open like eggshells and piles of rubble are now appearing as the rocks disintegrate. The rocks are the very foundation that supports coral growth, and they in turn support the reef fishes. 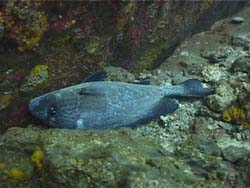 As well as being extremely destructive to the habitat, most of the fishes killed are wasted as they sink to the bottom and the fishers only collect those floating on the surface.

‘It is an utterly wasteful and destructive form of fishing; there are no long-term benefits. So much for fishermen being conservationists and protecting their fish stocks. It appears they are hell bent on killing everything before tomorrow’ says Charlie.

It can also be potentially fatal to divers who are in the water. Both Frew and Cornish have had to abort dives at Pedro Blanco after explosives were narrowly thrown into the water as they surfaced nearby. The pressure wave, which kills fish by rupturing their swim bladders, creates an extremely unpleasant sensation as it passes though the human body and can damage internal organs if too close.

“Your heart misses a few beats and you feel very uncomfortable. The saddest part is seeing fish rain down on you in an immobilized state and seeing moray eels with ruptured bladders fighting for survival. The sea has an eerie emptiness to it” Frew said.

Dr Cornish said he wrote to the Guangdong Marine Fisheries and Agricultural Bureau, who are responsible for the seas around Pedro Blanco, last year to inform them of the situation and received a favourable response. He has heard that patrols have been seen in the area more recently but the bombing continues as the rock is too isolated for regular patrols and it is very difficult to catch the bombers red-handed.

So what is the solution? Pedro Blanco is an ideal site for some kind of Marine Protected Area in terms of its rich marine life but enforcing regulations is problematic due to the large distance between the rock and the mainland. For the time being Frew and Cornish would like to see an increased effort by the mainland authorities to tackle the blast fishing problem and a realization by recreational and spearfishers from Hong Kong that the fish populations at the rock are limited and that restraint needs to be shown in terms of the numbers of fishes and their size taken by each person if these activities are to continue.