Tin Shui Wai station is the starting point of a fine heritage trail, with Hong Kong’s only historic pagoda.

Although Tin Shui Wai in northwest Hong Kong has become known as the “City of Sadness”, its West Rail station is the starting point of Hong Kong’s first heritage trail, along which you can see a fine selection of buildings hailing from an era when this was an affluent centre for agriculture, especially rice farming: the Ping Shan Heritage Trail (屏山文物徑).

The first point of interest along the trail is the Tsui Sing Lau Pagoda, right outside the station. When I walked the trail recently, a lady working here handed me a leaflet on the trail; this includes a map, and info on buildings etc: it notes that this is Hong Kong’s only historic pagoda.
When I first came to Hong Kong, this pagoda was set by an extensive area of fishponds, which have since been destroyed to make way for Tin Shui Wai. It had been a significant landmark in the flat land here – originally built for fung shui reasons, partly to guard against flooding; nowadays, more of a curio on the fringe of a minor city.

The trail follows a small road, leading away from the station.

Soon, there’s a relatively grand earth god shrine, residence of She Kung, who protects people in the area.

Then, the trail passes Sheung Cheung Wai, a small walled village that was first built 200 years ago by members of the Tang clan. It’s interesting to walk in through the recently rebuilt archway (rebuilt or renovated, judging by new brickwork), and wander along the narrow streets between tightly packed houses. Villages like this were built to protect people from inter-village feuds, and from bandits who once roamed the area.

Shortly after it, there’s an old well by the trail, in its own stone surroundings – looks like a place villagers once rested, maybe chatted as they collected water.

A track to the left leads to the small Yeung Hau Temple – where the surroundings are far more rural than at the pagoda.

There’s an altar outside the temple, crammed with statues of various Taoist deities (I reckon they are!); inside, Hau Wong takes centre stage. 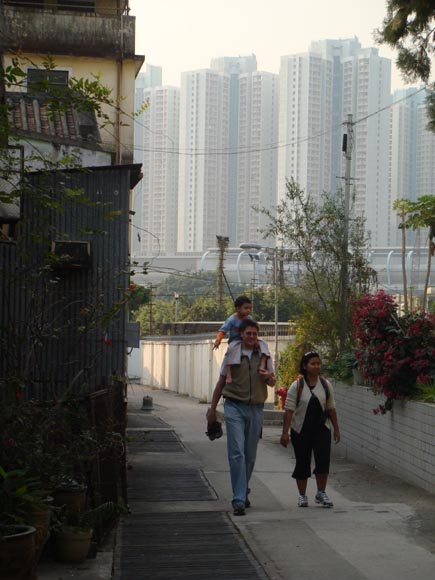 The trail here passes through villages, with a mix of old and new buildings, and Tin Shui Wai apartment blocks as backdrop.

There are two grand ancestor halls, built side by side, and with identical basic plans – though they differ in various details. The northernmost of these (first you come to if walk from the pagoda) belongs to the Tang clan; the other was built by two brothers who were also Tangs.

These are among the most splendid old buildings in Hong Kong (though admittedly, Hong Kong doesn’t have too many old buildings!) – hailing from an era when there was wealth in this area of what became the New Territories, and Kowloon and Hong Kong Island were rather poor, relatively backwards. The Tang Ancestral Hall was perhaps built some 700 years ago; the Yu Kiu Ancestral Hall was maybe built in the 16th century. 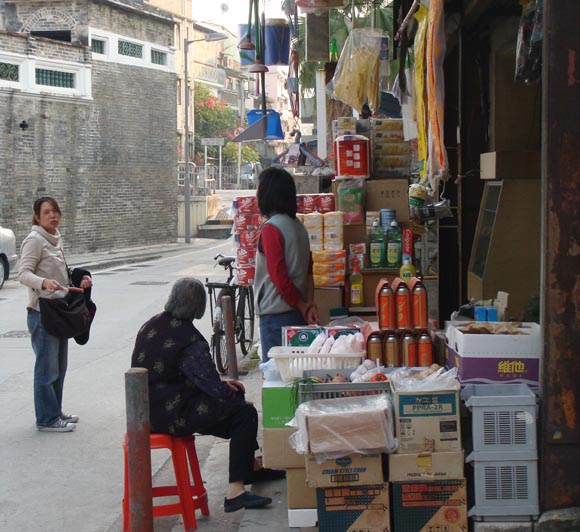 On from the halls, the trail follows a narrow street, with this small store.

Opposite the store are two old buildings, that are linked together, with fancy rooftops. At first glance, seemed these were closed, but there was an open doorway leading to a dark corridor; the map indicated this was the location of Kun Ting Study Hall, so had a look inside.

It was well worth heading inside, as the Kun Ting Study Hall proved very grand, and peaceful; it had also been built by the wealthy Tang clan – in 1870 – and was a place for ancestor worship and, as you’d figure, education.

Onward! A left turn took me to this open area in Hang Mei Tsuen., with Hung Shing Temple on one side.

Onward! A left turn took me to this open area in Hang Mei Tsuen., with Hung Shing Temple on one side.

The temple wasn’t impressive outside, but inside was this figure – probably Hung Hei, who is worshipped by fishermen and others whose livelihoods depend on the sea – with a splendid dragon painting as backdrop.

Next door to the temple was another fine looking building, not indicated in the trail leaflet. I looked curious, a woman indicated it was ok to go in; and I had a look: indeed a good building, recalling the ancestor halls (maybe it is one), with these fine paintings on tiles high on the side walls.

Here is one of those photos, showing the area around a hundred years ago: the police station is prominent on the hill, and some of the buildings along the current heritage trail can be seen in the village, facing across wet agricultural areas.

You can reach the trail via West Rail. The pagoda is right beside Tin Shui Wai station.
From the visitor centre, it’s around five minutes walk to Ping Shan light rail station, from where you can ride the light rail to Yuen Long West Rail station.