Picture a white-bellied sea-eagle – compact and powerful, with grey wings, white body and tail – flying east, above the north shore of Hong Kong Island. It cruises over the dense conurbation that ends at Siu Sai Wan, then glides across a narrow sea channel, to the tip of the Clear Water Bay Peninsula. Here, there are expanses of reclaimed land along the west coast, with a new town and Kowloon high rises close by. Yet as the eagle swings north along the line of hills that forms the spine of the peninsula, a far wilder scene appears to the east.

Just below, there’s a deep inlet, with sandy beaches. Beyond, the South China Sea is dotted with islands, and to the north are hills and headlands: thousands of years ago, the whole area was dominated by hills that rose above a coastal plain, but the sea has since risen, flooding valleys and turning hilltops into islands.

Swinging eastwards again, the eagle crosses a slender green headland. On the coast is Sai Kung town, facing Kiu Tsui Chau (Sharp Island), named for its narrow ridge and steep hillsides. Ahead is the Sai Kung Peninsula (西貢半島) – like a giant, stubby hand thrust into the sea. Though the peninsula is larger than Hong Kong Island, it is little inhabited, with few roads and villages. 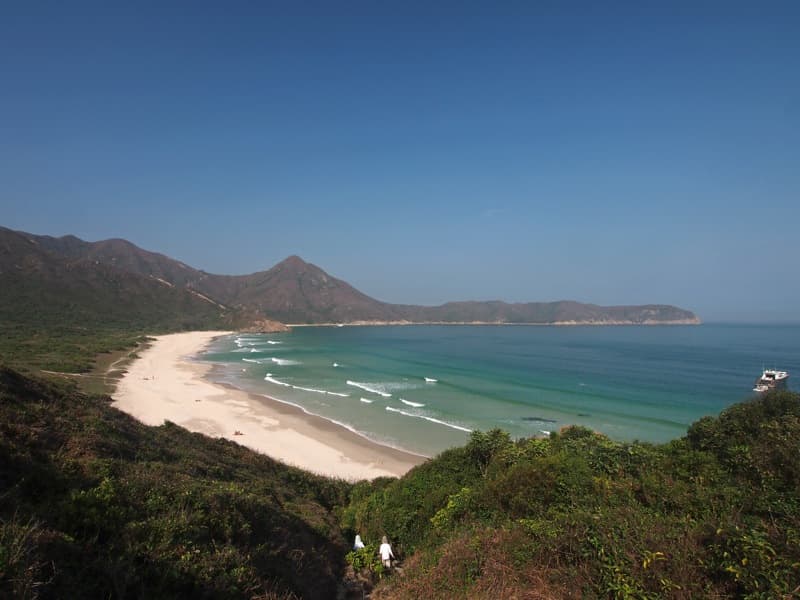 There are rolling hills, dropping to a myriad coves, and cradling a large reservoir.
On past the reservoir, the eagle is over a rough-hewn coastline, with cliffs sculpted from pale brown rock, Corals grow in the shallows here, and just to the north is Tai Long Wan – Big Wave Bay, which is perhaps the most beautiful area in Hong Kong.

This is wonderful hiking country. Though no peaks here are over 500 metres, there are some tough climbs – notably Sharp Peak in the east, High Junk Peak on the Clear Water Bay Peninsula, and the steep steps of Jacob’s Ladder. But there are also many easier trails, winding through valleys and villages, over ridges and along coastlines – and many places where you can feel far from the city. 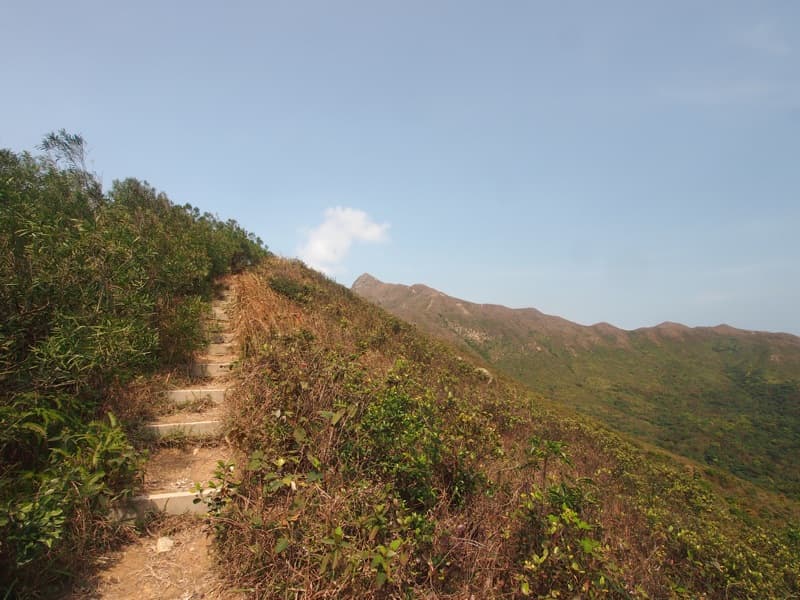 Because woodland is less developed and less diverse than in the central New Territories – and many of the hillsides are covered in grassland and shrubland – the land plants and animals are not outstanding, although there are mammals such as Leopard Cat, Masked Palm Civet and Wild Boar. Small wetlands hold Hong Kong Paradise Fish – a species known only from the SAR. And with the sea far cleaner here than in much of Hong Kong, and barely affected by the Pearl River, there is rich marine life. Corals are plentiful in some bays, such as Hoi Ha Wan, where they are protected in a marine park.

Around 280 million years ago – at the start of the Permian geological era, when the ancestors of dinosaurs emerged on land, the area that was to become Hong Kong was covered by a shallow sea. Sediments were laid down, later forming rocks such as sandstones and conglomerates. As the earth crust shifted, the sea level rose during the Early Jurassic, from around 200 million years ago. Finer sediments were deposited, since becoming mudstones and siltstones, which hold fossils including ammonites and bivalves.

Today, there only tiny outcrops of these rocks in the region spanning the Clear Water Bay and Sai Kung peninsulas – at the tip of a small headland by Sham Chung, and at Lai Chi Chong to the east. Elsewhere in this region, the geology is dominated by rocks formed during a period of intense volcanic activity, resulting from the collision of two great tectonic plates, and associated faults as sutures rent the earth’s crust.

The first volcanoes formed in northwest Hong Kong, near present-day Tai Mo Shan, and over time the volcanic centres shifted towards the southeast. Around 143 million years ago, a series of eruptions formed the rocks that now make up much of the Clear Water Bay Peninsula and northern Sai Kung Peninsula. A million years later, Hong Kong’s last major phase of volcanic activity began.

Then, maybe during major eruptions, the volcano collapsed. With pressure on the magma released, dissolved gases suddenly expanded, and blasted the liquid rock apart in immense explosions. Great clouds of incandescent gas and ash spread across the area: 70 square kilometres of ash were laid down in one event, six times the volume blown skywards when Krakatau exploded in 1883.

The ash particles were so hot that they welded together, to form a rock known as tuff. As this cooled, it contracted a little, resulting in vertical cracks between hexagonal columns of rock up to 100 metres high. Exposures of the tight packed rock columns are today among the most striking features of the Sai Kung Peninsula; and this formation is the world’s most spectacular example of columnar jointed tuffs.

After the eruptions ceased, Hong Kong’s geological history was relatively quiet. The volcanoes were eroded, especially along faults that served as lines of weakness. By the end of the last ice age – around 10,000 years ago – the region spanning the Clear Water Bay and Sai Kung peninsulas was dominated by hills and valleys, above a sub-tropical coastal plain. As the ice sheets melted, the sea flooded in across the plain, drowning the lower valleys, and transforming hilltops into the islands and islets that pepper the inshore waters.

The sea level stabilised around 6000 years ago. As throughout Hong Kong, sub-tropical forests clothed the hills and valleys. Small estuaries and deltas formed, and were colonised by mangroves. Corals grew in sheltered, shallow waters: these are among the world’s most northerly corals. There was also coastal erosion, including as typhoons roared in and great waves smashed into headlands, helping form cliffs and jagged headlands. But waves also created, swirling grains of rock into bays to build splendid beaches.

Although this area boasts beautiful scenery, the hilly landscape makes farming difficult. As it also lies away from the Pearl River – the trade route to Guangzhou – the region was only sparsely populated, and there are relatively few historic sites. A rock carving at Lung Ha Wan on the Clear Water Bay Peninsula is among the earliest relics of human activity, and was perhaps made during the Bronze Age (1200-400 BC).

During the Five Dynasties (907-960 AD), Tolo Harbour and Mirs Bay to the east became an important centre for collecting pearls. Local fishermen dived to gather oysters that maybe contained pearls; many died, perhaps drowning or even attacked by sharks. During the succeeding, Song Dynasty, pearl diving was banned as it was too dangerous, but pearls were again harvested from 1114, until the oyster beds were nearly exhausted and the practice was abandoned some six hundred years later.

Another local industry exploited and depleted marine life. People collected corals and shells, and baked them in stone kilns to make lime – for uses including an ingredient in cement and whitewash, waterproofing ropes and fish nets, dyeing cloth, and fertilising fields.

There was also a small local salt industry. An inscription on a boulder at at Tai Miu Wan (Joss House Bay) at the tip of the Clear Water Bay Peninsula reveals that during the Song Dynasty, salt production was controlled by the government. The inscription – 108 characters, carved on the boulder in 1274 – refers to the visit of an official directing salt production. It also notes that a pagoda was being built on nearby Tung Lung island, and mentions renovations to two temples at Joss House Bay.

Both temples were dedicated to Tin Hau, Goddess of Heaven, who is said to protect fishermen and seamen. The first was built by two brothers, who were grateful to Tin Hau after surviving a shipwreck, and the second a few years later by the son of one of the brothers. Only one temple remains. It’s the largest Tin Hau temple in Hong Kong, and in spring is the focus of a festival celebrating Tin Hau’s birthday, when fishermen in cheerfully decorated boats arrive to make offerings.

Hakka – “guest people” – farmers settled in Hong Kong from around the 17th century, fleeing famine and persecution further north. With the best farmland taken by Cantonese people, they mainly occupied hilly areas such as the Sai Kung Peninsula, establishing villages, including Pak Sha O more than two hundred years ago. Village life was hardly bucolic, as testified by the watchtower here and at Sheung Yiu, a hamlet built by a Hakka family in the early 19th century: at both, the villagers had to guard against bandits.

In 1863, Catholic missionaries arrived in Sai Kung. They were successful in converting local villagers, and today around twenty small churches can still be found in the Sai Kung area – even in remote villages.

Sai Kung is the largest town in the region, and formed as villages coalesced to become a market town, where residents from the surrounding area could meet, and buy and sell local produce. But there was no proper road from here to the city until after the Second World War, when a track constructed by occupying Japanese forces was rebuilt by the Royal Marines. As the officer in charge was nicknamed Hiram because of his fondness for a brand of sausages, the road became known as Hiram’s Highway.

In the 1970s, roads were built to near the eastern tip of the peninsula, to help with construction of one of Hong Kong’s largest reservoirs, High Island Reservoir. Access to these and the road north to Hoi Ha remains strictly controlled, however, as only vehicles with special permission can pass east of a barrier at Pak Tam Chung. This helps maintain the Sai Kung Peninsula’s beauty and value as an outdoor recreation area.

Also after the Second World War, work began on reforesting hillsides that had been cleared during centuries of human occupation. Sai Kung village communities were especially cooperative, and by 1952 the Sai Kung Peninsula was being transformed into one of Hong Kong’s most beautiful forest areas. A key species planted was Chinese Red Pine Pinus massoniana, but by the 1970s many of the pines were killed by nematode parasites carried by beetles. Broadleaf trees have grown in their place, so there are now expanses of young woodland with native species such as Chinese Tallow Tree Sapium sebiferum, Machilus species, Fragrant Litsea Litsea cubeba, Lance-leaved Sterculia Sterculia lanceolata and Ivy Tree Schefflera heptaphylla.

From the 1960s, Hong Kong farming steeply declined, in part because of cheap imports from mainland China. Many villagers left in search of a better life in the city, or overseas. Some villages were abandoned; they included Sheung Yiu, which is now a folk museum. Other villages that lie on or near roads have grown, with an influx of people who work in the city, but have chosen to live in the country – though many places have become little more than clusters of Spanish-style villas. The city has moved closer, too, with the development of Tseung Kwan O new town on the northwest of the Clear Water Bay Peninsula.

Several of the more remote villages have retained their rural character, perhaps becoming destinations for rural tourism. The “tourists” – overwhelmingly Hongkongers – visit to enjoy the superb hiking trails that ramify through country parks, as well as to snorkel, dive, take photographs, watch birds and other wildlife, paddle kayaks, fly kites, or simply enjoy roadside barbecues in areas that seem far from the tight-packed apartment blocks of urban Hong Kong.