My farourite Hong Kong bus ride is east from Mui Wo to Ngong Ping, heading along the south coast of Lantau Island, then up into the hills. 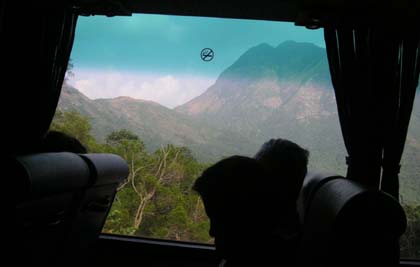 Though Hong Kong has some fine bus routes into and wholly within the land beyond the city, my favourite is the New Lantao Bus Company’s Route 2 – from Mui Wo ferry pier to Ngong Ping (Big Buddha), on Lantau Island.

Leaving Mui Wo, this climbs a small, wooded hill, passing an oddball signpost with some fanciful, colourful carved birds, then drops to Pui O. Then, it’s down, and round, to travel along Lantau’s south coast.

Along south Lantau Island, then up to Ngong Ping – and the Big Buddha

You head through Pui O (worth checking out for the buffalo, fields and beach), then it’s up and over another small hill.

Down again, you pass long, sandy Cheung Sha beach – which is so far unspoiled by development; especially on a clear day, there are views to islet dotting the sea, while inland mountainous Sunset Peak dominates the scenery. 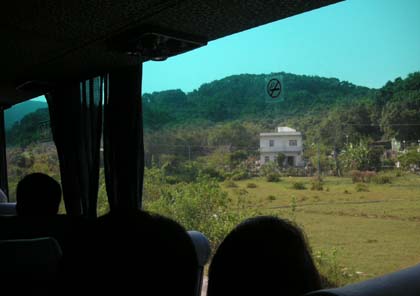 There are more small villages – and a fair chance of feral cattle lingering by or even on the road: this is one of those marvellous areas in HK that are near and yet far from the city. Another hill, another downhill stretch, and the bus crosses the dam of Shek Pik Reservoir – and just you watch to see if at least a few people don’t point at something high on the hills above the reservoir.

There’s a longer uphill stretch, through more woodland, with rough hewn Lantau Peak dominating the landscape to the east.

The bus turns right (straight ahead is Tai O), then zigzags on upwards, with the hills of southwest Lantau laid out below. The road runs through a narrow gap in the hills, and arrives at the Ngong Ping plateau – with the Big Buddha perched atop a hill on your right.