Hong Kong’s highest mountain, Tai Mo Shan (大帽山), dominates the central New Territories north of Kowloon. Its name means “Big Hat Mountain” or “Big Misty Mountain”, after the low cloud and mist that often swirls around the summit. Though just 957 metres high, it deserves to be called a mountain, not a hill – as it’s such an imposing presence in the landscape.

Though seasoned hikers once liked to accompany newbies to the summit, then enjoy the sight of them tumbling into a concealed hollow, Tai Mo Shan is no longer a major peak to climb, as there’s a service road to a communications facility and other paraphernalia perched on top. But this service road is closed to most vehicles, and makes for pleasant strolling on the upper reaches of Tai Mo Shan – especially on a clear day when Hong Kong’s summer heat is on, and the temperature here can be just a tad cooler.

(On rare winter days, the temperature here can dip below freezing – when cold weather is forecast, some Hongkongers drive up before dawn, in the hope of seeing frost.) 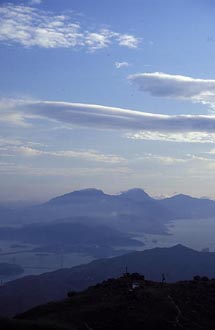 The service road starts at a car park, high on Tai Mo Shan. There’s a barrier you can walk past, and the road angles fairly gently up the hillside, which is grassy, dotted with big boulders. On a clear day, you can look north, across the Shek Kong Plain way below, to Deep Bay, and Shekou in mainland China beyond; there are rolling hills to the west, then Lantau Island, and Kowloon and the western harbour.

The hillsides are peaceful. Maybe you’ll encounter a few strollers; perhaps also a herd of feral cows, descendants of farm animals that now live wild in these hills. (Happily, these cattle seem pretty docile; I’ve walked close by a bull or two, without them seeming at all bothered – while I was wondering how fast I could run if they even thought about approaching me.)

The road winds more steeply uphill, passing a small valley with dwarf bamboo. There’s a broken old fence that once marked off a small grassy hilltop on the right, and just after this, a rough track heads right. Though you can continue up the road to almost the top of Tai Mo Shan – and then down, to perhaps hike past the Ng Tung Chai waterfalls, or on to Leadmine Pass above Shing Mun Reservoir – this track makes for a pleasant diversion, and perhaps for enough of an outing on a hot afternoon. 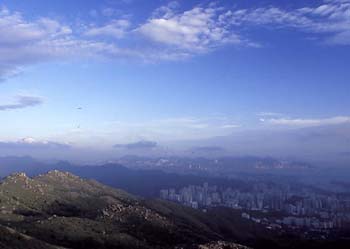 The track dips slightly, and the view to the south opens out – there are rough, grassy slopes below, the Kowloon Hills including Lion Rock beyond, and Victoria Harbour and Hong Kong Island in the distance. (If you’re lucky, that is! All too often smog wafts in from mainiand China, obscuring such views; but the scene can be clear as crystal when there’s a breeze from the south.)

There’s little else here; a concrete path drops to a small ravine, to a tiny dam hidden amidst trees. You should hear birds – and if you’re a birder, perhaps you’ll find some of the species that in Hong Kong are mostly found high on Tai Mo Shan.

Then, perhaps that’s enough exploring Tai Mo Shan for today. If you started around mid-afternoon, perhaps you’ll emjoy a spendid sunset as you walk back down.

And if it’s around sunset on a spring or summer’s day, chances are that Chinese francolins will be “singing”: Come to the Peak, ha ha!

From Tsuen Wan, take bus 51 from road over MTR station, then walk up from Route Twisk (following road that turns off to right from Route Twisk, where the road levels out); or take a green taxi.