The Tai Po Kau (大埔滘) Nature Reserve is a splendid example of reforestation. 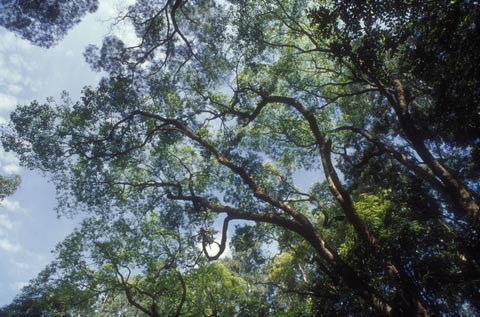 Originally designated as a Special Area within the country parks system, the Tai Po Kau (大埔滘) Nature Reserve is a splendid example of reforestation – supporting a wide range of fauna and flora as well as being a good place to visit, with an excellent trail system. It’s set in a valley on the east slopes of Grassy Hill, low on the Tai Mo Shan (大帽山) massif.

Like much of Hong Kong, Tai Po Kau was originally forested, but by early last century the hillsides were mostly cleared of trees. In 1926, the government established a plantation here. The main trees were Chinese red pines Pinus massoniana, giving rise to the local name for the area: Tsung Tsai Yuen – Pine Garden.

There was further deforestation during the Second World War, but since 1946 the forest has been protected, with many trees planted. Rather than employ the sparse mix of non-native species typical of Hong Kong plantations, there was a far-sighted decision to instead plant and nurture a mixture of tree species, including some that were uncommon or rare.

The Tai Po area was an especially appropriate location for such a reforestation scheme – as according to legend, the original name was derived from dense forests that once grew here. There were said to be wild and dangerous animals in the forest, and if locals were to enter, they were warned, Take long strides [tai po], otherwise the tigers and snakes will get you!

Today, with the tigers long gone, and snakes rarely encountered during daytime – especially in cooler weather you can enjoy the regenerating sub-tropical forest by walking one of the sign-posted trails. If you are new to such forest, one thing you will soon learn is that although there is plenty of information telling of the relative abundance of plants and animals here, it’s hard to see the wildlife for the trees: finding wild creatures such as birds and mammals requires effort, and a degree of luck. 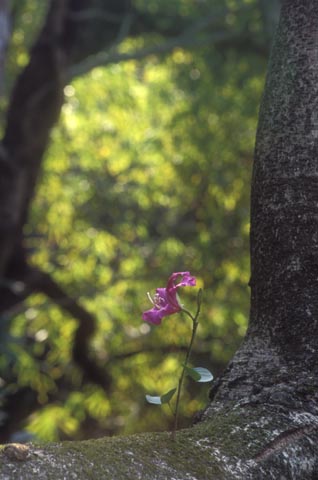 Even the trees can seem fairly uniform as you walk through – the great 19th century naturalist Alfred Russell Wallace noted that reports of tropical forests may suggest they are ablaze with colour, yet for the most part they simply appear green. But you will see there are various shades of green, especially as the dry winter gives way to warmer, wetter spring.

Some trees bear lovely flowers, especially the Hong Kong rose Rhodoleia championii – a species that was first discovered in Hong Kong, near Aberdeen. A grove of these has been planted within the reserve; the trees flower in early spring, their large, intense pink flowers attracting birds such as white-eyes and sunbirds that feast on their nectar – and spread their pollen.

Also in spring, you should notice small, almost flower-like clusters of reddish leaves on several shrubs and small trees. These are fresh leaves, and are perhaps red because this helps make them seem unappealing to leaf-eating animals; once they have grown stronger, they will turn green with chlorophyll for harnessing sunlight.

Though Tai Po Kau is home to animals typical of Hong Kong forests, the mix of trees helps make it especially good for wildlife – it’s one of the territory’s best birdwatching sites, attracting migrants and supporting a growing variety of breeding birds. The best forest is in the lower valley, mainly near the stream. In higher reaches there tends to be less tree diversity, with pines and Brisbane box that are relatively poor for wildlife, and on some of the highest slopes the trees give way to grassland. 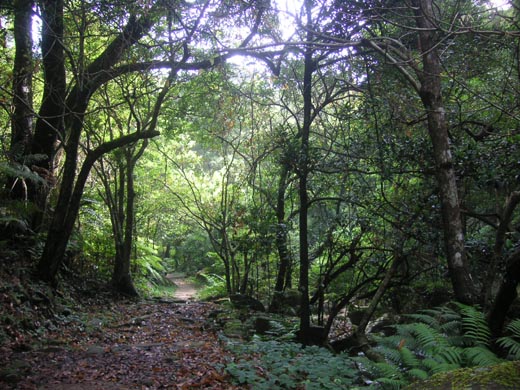 Though tropical and sub-tropical forest should support a high diversity of bird species, the Tai Po Kau forest was planted after Hong Kong was largely deforested, which would have devastated local bird populations, with most or all forest specialists becoming locally extinct. As the trees have grown, so too have the numbers of empty niches like situations vacant for forest birds.

Over time, some of these niches have been filled, by a mixture of birds arriving naturally from forests in mainland China, and others that were released from captivity. One of the first such arrivals was Fork-tailed Sunbird Aethopyga christinae, a tiny, nectar eating songbird. This species was first recorded in Hong Kong during summer 1959, when four were seen in Tai Po Kau. It appears these were pioneering colonists, as sunbirds visited in autumn and winter, remained to breed, and a local population was established, until by the late 1970s they were fairly common in Tai Po Kau and other wooded areas. 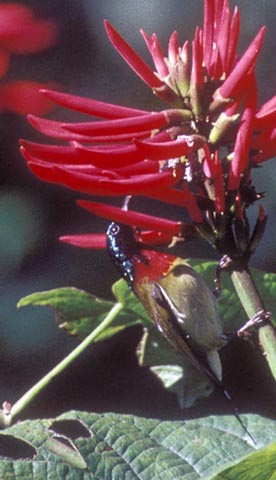 The male sunbirds are beautiful birds, with iridescent green heads and red throats, and other brightly coloured birds followed. Grey-chinned minivets Pericrocotus solaris and scarlet minivets P. flammeus were recorded as winter visitors in the 1950s and 1960s, but by the late 1970s had begun breeding, since when they too have increased in numbers, with Tai Po Kau remaining a key stronghold. The male minivets are red and black, the females yellow and black; they gather in flocks that may decorate trees like active Christmas ornaments. Orange-bellied Leafbirds Chloropsis hardwickii were recorded in Tai Po Kau during summer 1988, and now breed in small numbers. Handsome Chestnut Bulbuls Hypsipetes castononotus used to be winter visitors, but likewise began breeding here in the 1980s, and have now largely replaced Chinese bulbuls Pycnonotus sinensis in the forest.

Some other bird species that are now resident in Tai Po Kau are common or fairly common in forests in Guangdong province, but are not known to migrate or wander from their home areas. Possibly they have spread in Guangdong as the province has begun protecting secondary woodland on once denuded hills, and at least some individuals have then crossed the border. Or, they might all be released birds. These include rufous-capped babbler Stachyris ruficeps, grey-cheeked fulvetta Alcippe morrisonia and, most recently, pygmy wren-babbler Pnoepyga pusilla.

Other birds that occur no nearer than southwest China seem certain to have come from captivity, including as people released them in misguided attempts to gain Buddhist karma. Velvet-fronted nuthatch Sitta frontalis, blue-winged minla Minla cyanouroptera, and silver-eared mesia Leiothrix argentatus are now all fairly common or common in Tai Po Kau, and expanding their ranges in Hong Kong.

Though this mix of natural arrivals and escapees has enriched Tai Po Kau’s birdlife, the birdlife is still impoverished compared to undisturbed tropical and sub-tropical forest. Even if and when more species arrive – and some that surely once occurred here, such as silver pheasant Lohura nycthemera, are perhaps introduced – we will never really know just what birds once existed in those vanished, “Long strides” – tai po – forests. 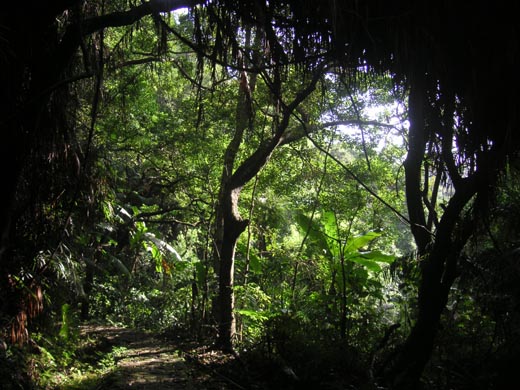 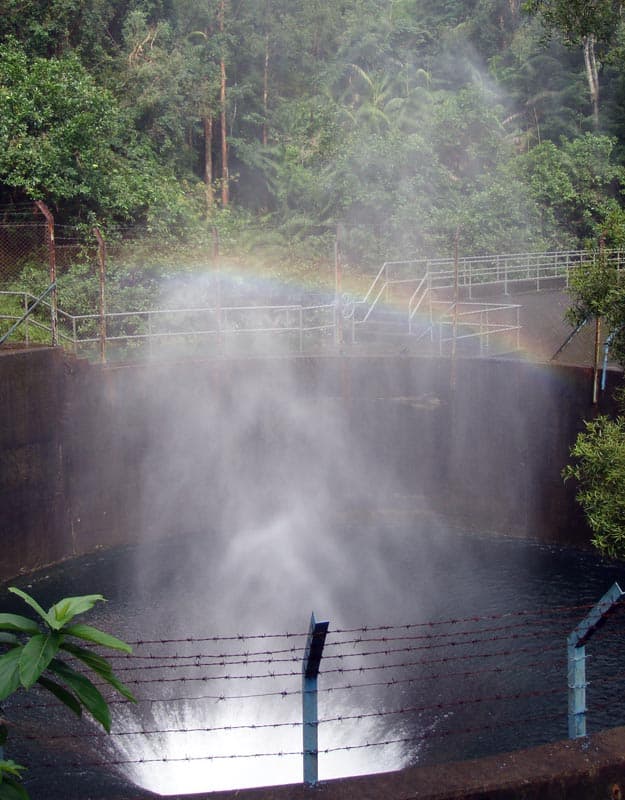 Four colour-coded walks start by a small dam, where most of the water from the stream is diverted into tunnel leading towards Plover Cove Reservoir. They follow the east sides of the valley, then cross to the west of the valley before looping back down to the starting point. Each is well sign-posted.

The blue and red walks are the shortest routes, and run through the best forest, so are most popular with birdwatchers. One good option is to follow the blue walk most of the way round, then take a short trail leading to the end of the red walk. Until the junction with this trail, this route runs close by the stream, which helps make the walk enjoyable even if birds prove elusive.

Soon after the dam, the yellow and brown walks climb to around 300 metres, then roughly hug contours in the higher reaches of the reserve, where the forest is a little sparser, with more Brisbane box trees. From the upper valley, you could also walk out of the reserve along a service road leading to Leadmine Pass, above Shing Mun Reservoir.

There is also a nature trail, though this is perhaps best if you are interested in learning about the vegetation here; can be good for birds at times, perhaps especially when visitors are disturbing birds along the other trails.

Tai Po Kau is among places covered in my book, The 25 Best Day Walks in Hong Kong.