Victoria Peak is a great place to walk paths with fabulous views.

The Peak – or Victoria Peak (太平山) – is one of the tourist “musts” in Hong Kong. But often, it seems, people do little but head to the upper Peak Tram station, below and east of the summit, peer at the view (hah! – these days that may mean squinting through smog), and then leave. Which is a pity, because the Peak is a great place for wandering around, for tourists and residents alike.

One popular, easy stroll is a circuit of the Peak. From the upper Peak Tram station, head right, along Lugard Road. This is more a footpath than a road, and hugs contours around the north slopes of the Peak. It passes through woodland and scrubland, and is a little like a nature trail, with signboards telling of plant and animal life, geology, and how the path was constructed – partly on supports where the path overhangs the steep hills.

Initially, trees hide much of the view. But after about 10-15 minutes, the trees give way to scrub, and there are superb vantages for vistas over the harbour and city below – excellent in clear weather, and worthwhile in early evenings as the city lights come on. Black Kites are likely floating on air currents rising above the buildings’ towards dusk, they glide eastwards, bound for a roost in central Hong Kong Island.

Immediately west of the Peak, Lugard Road gives way to Harlech Road, which is again little more than a footpath. Here, too, you could take other trails, maybe as a bonus to a Peak circuit, or avoiding the circuit altogether.

One of these trails is easily overlooked: it leads west from a tiny park, through trees, and appears as if it’s a trail to nowhere. This appearance is deceptive. After a few tens of metres, it arrives at a concrete bunker that was one of Hong Kong’s defensive sites during the Second World War. And from here, the trail climbs – to the top of High West. 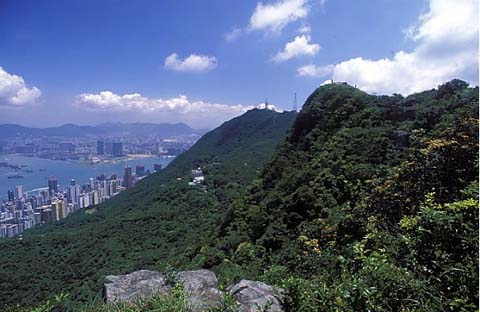 High West is a knock-out peak; a rough n rugged summit that overlooks the Peak and the city, Pokfulam and its reservoir by the coast below, and islands including Lamma and Lantau. Even the relatively new concrete steps to the top haven’t really tamed this peak, which can seem well remote from the bustling tram station.

Other options from the junction of Harlech and Lugard roads include continuing on the Hong Kong Trail (which you’ve followed from the tram station to here), to drop down and round to above Pokfulam and then On, On! to Shek O; and heading down northwards, past the remains of Pinewood Battery.

The Peak circuit continues along Harlech Road, along the wooded southern slopes of the Peak, which slip down to Pokfulam Reservoir. Near the tram station, it crosses a bridge below a small but picturesque waterfall.

Another pleasant stroll leads up Mount Austin Road, from just opposite the Peak Tram station. There’s typically little traffic on this road, which winds up past some grand and pricey housing, and green hillsides. 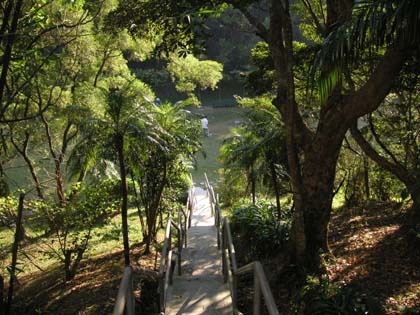 There’s a park/playground on the left. Beyond this, the road turns sharp left, then more steeply uphill, to pass a small but real pleasant park, Victoria Peak Gardens. 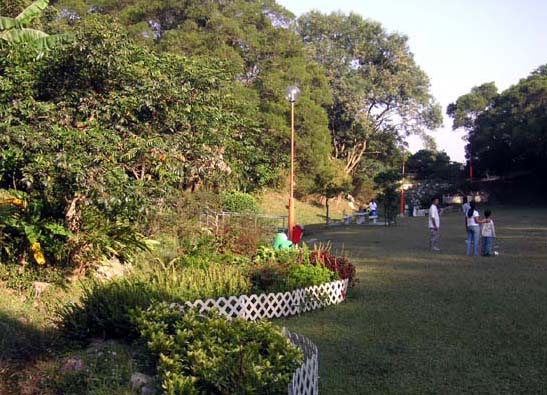 You can walk through these gardens – across lawns by a small stream, trees and shrubs. There are benches, and it’s a nice place to relax.

Above the gardens is a car park, with a short path to a lookout point, which is a fine vantage over western Hong Kong. There’s also a trail down; a right turn takes you on down to the junction of Harlech and Lugard roads, which to the left is a short circuit known as the Governor’s Walk, which skirts round a hilltop, to loop back to the bottom of Victoria Peak Gardens.

Then, while not really a Peak path, there’s another walk worth mentioning from the upper Peak Tram station. Just opposite the car park is Pokfulam Reservoir Road, which is a restricted access road that makes for a good stroll down to Pokfulam Reservoir, as well as a short cut to the section of Hong Kong Trail leading towards the Aberdeen Reservoirs.

I reckon the best way to the upper Peak Tram station is, as you’d guess, to take the Peak Tram. Sit on the right if you can, for the best views – including of buildings that tilt as you ascend.

Published or Last Updated on 1 September 2022