A short summary of Hong Kong tourist attractions including hiking trails, a nature reserve, and islands.

So you’ve just arrived in Asia’s World City, the City of Life (well, that’s what the Hong Kong Government and the Hong Kong Tourism Board say anyway), this place where it used to be said that East Meets West. What to do?

Well, there’s shopping! There are shops, stalls and shopping malls everywhere you look in the city, packed to the gunwales with designer goods, foodstuffs, arts and crafts, luxury brand handbags, watches, cameras. Whew! – could lead to credit card meltdown, so let’s go.

Now, weighed down with carrier bags (designer brand bags, of course), what next? Let’s eat! There are so many restaurants and cafes, with menus to tempt the tastebuds, pamper the palate, to send even the most ardent gourmets into paroxysms of delight.

Waddling out of the restaurant, clutching all these heavy bags, does Hong Kong tourism have more to offer? But of course: there’s sightseeing! You can join a Hong Kong tour – during which the guide may kindly take you to another shop, or a factory outlet, so we can do more shopping. Or, tour independently, check out some Hong Kong tourist attractions.

On tour in Hong Kong, from Victoria Harbour to the New Territories, and Outlying Islands

Surely the leader among these tourist attractions is Victoria Harbour – the sheltered anchorage that was the very reason Hong Kong came into being, as it afforded the British a useful base for trade with China. Yet for all you hear of the harbour being beautiful, in the centre of the Pearl of the Orient, it is sadly mistreated. There are no rows of waterfront cafes and bars, no marvellous promenades where you really want to linger as you stroll and savour harbour views.

You can peek at the harbour from beside Outlying Islands ferry piers – close by a stretch of yet more harbour that is being reclaimed so Hong Kong can build yet more waterfront highways (much of the city is built on reclaimed land; arguments rage over whether more reclamation is wise or necessary). There are good harbour views from in front of the Convention Centre – though this too is close to the reclamation work. More pleasant is a path leading east from the Star Ferry Pier on Tsim Sha Tsui side.

But for the best views, you should ride the Star Ferry; it’s cheap n cheerful, and on a clear day the views of harbour, city and hills are majestic. Try at dusk, too, when the lights are on. 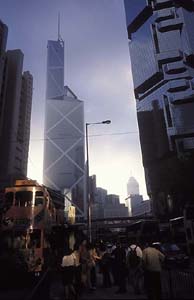 Central, Kowloon, a park and the Peak

Then, there’s the city itself to check out. Central, the main business district, is where you’ll best sense Hong Kong’s capitalist heartbeat; gleaming towers celebrate wealth creation, the Hong Kong and Shanghai Bank building is relatively “old” but it’s still fun to walk inside, and gaze up the hollow interior. Behind the bank, there’s a footpath beside old banyan trees, to St John’s Cathedral, a rare old building in a city that loves to toss out its past as soon as there’s a dollar to be made.

Also near the bank is one of Hong Kong’s most elite shopping malls. Some scurrilous folk say rich men have paid for stores here so their mistresses can have a proper job, selling fancy clobber to ladies with time and money to spend. Still, it’s a chance for more shopping, as you do your tourist duty and keep the tills ticking over.

Elsewhere are far more lived-in city districts, with street markets, small eateries with noodles, fried rice, dumplings, French toast laced with syrup; almost like villages within the city (and with high-rises instead of small housing), these are often fascinating for local colour. Parts of Wanchai are like this, but for the full-on downtown Hong Kong experience, head for Mong Kok and nearby in Kowloon.

Tsim Sha Tsui, the southern tip of the Kowloon peninsula, is more tourist friendly. Streets here are lined with camera stores (take care, some of them profit partly through dodgy deals), as well as tailors, fashion clothing shops, and stores with handicrafts from China, t-shirts emblazoned with Hong Kong, crude Hong Kong paintings – often with sailing junks, though you try to spot a real sailing junk nowadays. Come on, you’re a tourist, Hong Kong loves you because you love shopping, so dig out your cash, your credit cards, your traveller’s cheques.

There are museums nearby; best is the Museum of History, while the Space Museum is worthwhile if there’s a decent IMAX movie showing. And for a break from the city, try Kowloon Park; it’s real pleasant.

Back on Hong Kong Island, there’s the Hong Kong Tram to ride; try upstairs, for views of city life. And, of course, there’s the Peak Tram – sitting on the right if possible, to watch buildings lean backwards, as the tram quickly climbs above the city. Once at the top station, there are restaurants, and shops. Yes, there’s even more shopping!

But wait, are you really some kind of shopaholic, is shopping the be all and end all of your existence as a tourist? (If yes, you’d better leave this site immediately; try the Hong Kong Tourism Board’s All About Shopping page.)

If you believe there’s more to life than city streets and shopping, you’ll find Hong Kong has a lot to offer, though you have to dig beyond the hoopla about shopping and dining and so forth to really make the most of your visit. This Upper Peak Tram Station’s a great place to start exploring, to start really having some fun in Hong Kong.

Walk right from the station, along Lugard Road (mostly like a footpath), and in 15 minutes or so you’ll enjoy classic Hong Kong city and harbour vistas that eclipse the scenes from the station’s viewing galleries; try also around sunset. Keep going and you can cirtcuit the Peak, with fine views most of the way, plus chance of a detour up High West, which despite concrete steps remains a pleasantly wild summit. Walk up Austin Road from the Upper Peak Tram Station, and you’ll find a couple of gardens, a side track to a vantage point, and another Peak circuit, the relatively little used Governor’s Walk.

Or cross the road from the car park near the Upper Peak Tram station, to Pokfulam Reservoir Road, a narrow road that’s closed to regular traffic, which drops down through woodland to Pokfulam Reservoir, and meets the Hong Kong Trail – which you could follow along wooded hillsides to arrive at Aberdeen. This is one of four long-distance trails in Hong Kong; each makes a tough hike for a day (or more), but you can cover stages. 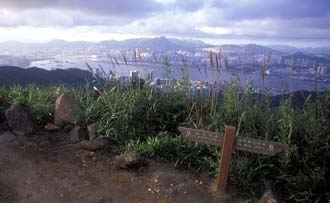 Elsewhere on Hong Kong Island, there’s Stanley on the southern coast – maybe best reached by taking a front-row, upper deck seat on bus 6 that climbs over the central hills of Hong Kong Island. Shek O’s a brilliant, eccentric village on the east coast, with beaches and cracking scenery. You can hike above Shek O, along Dragon’s Back; or try the hike from Parkview over Jardine’s Lookout and Mount Butler, for more belting views.

Into the darkest New Territories

Head north of the city, into the New Territories and you can find more wonderful hiking in the Kowloon Hills, including the somewhat tough clamber to the top of Lion Rock. North further still, and there are abundant hiking trails on and around Hong Kong’s highest mountain, Tai Mo Shan – including trails in Tai Po Kau Forest Reserve, alongside Shing Mun Reservoir, and to the Ng Tung Chai waterfalls – and there’s a top place to visit at Kadoorie Farm and Botanic Gardens.

Sadly, the northwest also has some seriously trashed farmland – where swathes of fields have been smothered by container yards, scrapyards and other eyesores. For prime scenery, you should head east, to the more sparsely inhabited, hilly eastern New Territories. There are hill walks here, too – for my money, the best climbs Ma On Shan, which is perhaps Hong Kong’s most spectacular summit.

East of Ma On Shan is the Sai Kung Peninsula, with some of the wildest landscapes in Hong Kong. Tai Long Wan is a classic place to visit, and there are a host of other fine places along trails, with waterfalls, beaches in small coves, rural restaurants, villages including the Sheung Yiu Folk Village.

North from here is another wild chunk of land, where Tai Mei Tuk has become a centre for locals heading out of the city, to places like Bride’s Pool and its waterfalls in wooded ravines, villages including Wu Kau Tang, and for hikes along impressive hill and coastal paths.

Hong Kong also boasts islands – over 200 some say, though many of these are little more than rocks, while the largest, Lantau, is larger than Hong Kong Island. Nowadays, you can reach Lantau by bridge, though the ferry to Mui Wo is more enjoyable; though known for the Big Buddha at Ngong Ping, Lantau has way more to offer, with some of Hong Kong’s best hiking (try the southwest corner, also the trail over Lantau Peak), an abundance of temples and even a Trappist Monastery, as well as villages including Tai O with riverside houses on stilts, beaches, a ravine to challenge adventure buffs.

Other islands are likewise home to commuters, and so have daily ferry services. Cheung Chau has tens of thousands of residents yet retains small fishing community character – helped by most buildings being three-storeys, and the narrow jumble of streets that criss-cross the strip of land between harbour and main beach, and cling to the hillsides on either side of this strip. Walk north or south of the housing, away from the ferry pier, and you’ll find convoluted trails that wind along coastlines, and in and out of small valleys.

Peng Chau is like a smaller version of Cheung Chau. Lamma has a higher proportion of expatriate residents, some of them favouring alternative lifestyles, others with regular city jobs; the south of the island is like more remote parts of the New Territories.

Other islands are sparsely or barely inhabited, and only few are served by ferries, operating only during weekends and public holidays. Po Toi lies south of Stanley, a sparsely vegetated chunk of granite with short but steep hill trails, a wave carved southern headland, and fine seafood restaurants for lunch before the ferry back to Stanley. Tung Lung Island is east of Hong Kong Island, and is mainly a hotspot for rock-climbers, drawn by the great sea cliffs.

Off Sai Kung are islands you can reach by small boat, such as a Kaito hired from Sai Kung harbour. Then, away to the northeast of Hong Kong proper, little more than a stone’s throw from the coast of mainland China, there’s Tung Ping Chau – a gently rolling islet with mudstone sliced to form low cliffs, and a white sand beach with corals just offshore. 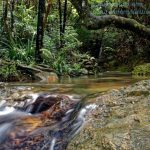 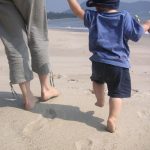 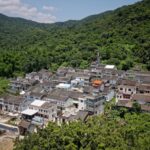 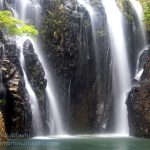 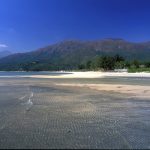 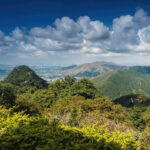 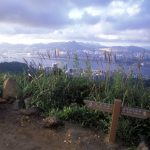 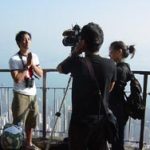 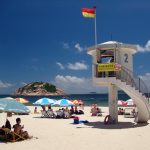